Live-action video game ads are nothing new. Microsoft has been famously using them to advertise its flagship series, Halo, for nearly six years, starting with the Neil Blomkamp directed live-action “Landfall” shorts.  Initially created to bolster public interest in the now defunct theatrical Halo film, the shorts featured weaponry and vehicles designed by Weta Workshop, and gave fans their first glimpse into what combat between the Covenant and UNSC forces would look like in a live-action setting. Since the success of this marketing campaign, nearly every subsequent Halo title has been accompanied by its own live-action ad, and Halo 4 is no exception. But, while Forward Unto Dawn may not be Microsoft’s first live-action Halo video series, it is by far the most ambitious.

Utilizing a budget much larger in-scale than that of its live-action predecessors, Forward Unto Dawn bravely attempts to tell a very human tale in a universe that’s not often known for gripping, character-driven stories. The film focuses on Cadet Thomas Lasky and his fellow freshman members of Hasati Squad in a UNSC military academy, shortly before humanity’s first encounter with the Covenant.

Under the direction of Stewart Hendler (Sorority Row, Whisper), actors Tom Green (Dance Academy), Anna Popplewell (The Chronicles of Narnia), and the rest of the cast provide great performances and craft a surprisingly engrossing story. Unfortunately, Forward Unto Dawn is not completely free of the silly, campiness that notoriously plagues most video game themed films.  However, aside from a predictable love story and a few too many slow motion scenes, Forward Unto Dawn is far and away better than your average video game flick.

As you probably already know, Forward Unto Dawn was originally released online over a series of multiple, 20-minute long chapters leading up to the release of Halo 4. While this Blu-Ray and DVD do provide all the chapters together in one 90 minute movie, the entire movie (as well as the majority of the bonus features such as the “Making of” video, deleted scenes, and short vignettes) can be viewed online for free. Therefore, unless you are really into storyboards and concept art, spending $28.99 for the Blu-Ray or $22.99 for the DVD is really more about the convenience of having all of this stuff bundled together in one easily accessible format. 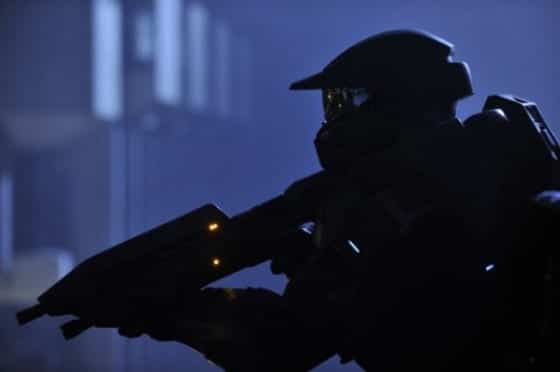 Although he does make an appearance, this is not the story of Spartan 117.

If you’re simply interested in checking out the movie (which I highly recommend that you do), you’re better off viewing it for free online via Machinima Prime on Youtube, or on Halo Waypoint on your Xbox or at Xbox.com.  However, if you’re a fan of the series and you’ve read any of the Halo comic books or novels, Forward Unto Dawn is worth the investment as it’s arguably one of the best pieces of fiction from the “Haloverse”.