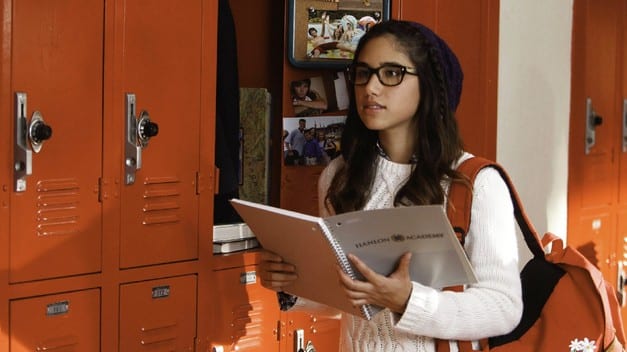 It was a return to the usual formula on The Mindy Project this week, with the plot focusing almost exclusively on Mindy’s exploits with her teen neighbor Sophia (Kara Crane) and forcing the rest of the characters onto the sidelines. Mindy as a character is intentionally grating, I understand, but because of that I think the audience deserves mini-breaks from her overwhelming personality with explorations of the other characters. That’s all I’m asking for, really.

In the cold open, Mindy and Danny are chatting with an intern who we’ve never seen before (and probably won’t see again) when the topic turns to self-defense. The intern offers to demonstrate on Mindy, but all he gets out of it is unconsciousness at the hands of Morgan, who thought Mindy was really in danger. I’m sure most of you thought this was funny, but I’m the type who cringes at most America’s Funniest Home Videos because it looks like they hurt, so this episode and I got off on the wrong foot.

It looked like things were going to get better when Mindy chatted with her teenage neighbor, Sophia, who seems like kind of a hipster. Mindy doesn’t seem to get how old she is, and offers to bring her to the American Girl store sometime. Sophia already donated her doll to tsunami relief, so either way, that trip wouldn’t have worked out.

At the office, Danny receives an anonymous formal complaint about Morgan inappropriately ogling Shauna all the time. I haven’t seen him do this, but I don’t doubt it for a second. Danny’s upset because now the lawyers might have to get involved and he doesn’t want to deal with the possibility of a lawsuit, but Mindy reminds him that as a partner he can’t pawn this responsibility off and has to deal with it.

Mindy’s next patient is—surprise—Sophia. Does anyone else think it would be super weird to live in the same building as your gynecologist? Just me? Anyway, Sophia’s there to get birth control because she’s thinking about having sex with her boyfriend soon. Instead of being a professional and being glad she’s taking the necessary responsible precautions, Mindy refuses to give her any on the grounds that she feels Sophia is too young for sex. Um, what? I’m not well versed in the legality of doctors refusing care in these situations, but everything about this interaction screams “so not okay” to me.

Over in Danny’s office, he’s called Morgan and Shauna in to talk about the complaint. At first Morgan thinks he’s being reprimanded for various dogs that he’s had in the office, but Danny reads them the letter. Morgan apologizes in his rambling way to Shauna, who doesn’t seem too bothered by the whole thing. He wants to make a blood oath about their forgiveness pact, but Danny and Shauna shut that down ASAP. I feel like the writers are still trying to strike the right balance for Morgan in terms of his weird behaviors, and I don’t think they’re quite there yet. The upshot of it all is that Shauna wasn’t even the one to write the letter, and Amanda Setton got her couple of lines for the week.

Mindy is still talking to Sophia about her plans to have sex, and even stoops to using the old “I wish I had someone to tell me this when it was me” argument. As a compromise, Sophia agrees to let Mindy come visit her at school to meet her boyfriend, Henry, in person. Jeez, how close are these two? If I was Sophia, I would just go find a different doctor.

Sure enough, Mindy shows up to Sophia’s school, where she meets her friend Ben. Ben is wearing a scarf that I am supremely jealous of, and loves Mindy instantly. He’s also wearing green slime on one hand for some reason that neither Mindy nor I can fathom, and I love this little commentary on how utterly bizarre most teen fads are when seen from the outside.

In a student lounge that is way cooler than anything that existed in my high school, Mindy meets the famous Henry (Alec George) and interrogates him from a beanbag chair. Mindy shows her age by chastising various teens in the lounge who are either in her way or throwing paper around. Henry has decided not to put himself through the debt burden of college and will instead create an awesome app and get rich, a la story of Mark Zuckerberg. Mindy pokes holes in this plan while taking too long for it to be funny to fall off and then reposition herself on the beanbag. Mindy holds Josh up as the model of a guy worth waiting for, and before I can wonder if she’s dating the same character I’ve been watching, Sophia asks to interrogate Josh in return and Mindy says yes.

Back in the office, Danny is dictating a complaint letter about the faulty drawstrings in his brand of scrub pants to Betsey. She’s distracted by the sight of Shauna getting checked out while putting up decorations in the reception area, and blurts out that she was the one who made the complaint.

Sophia meets Mindy and Josh at the restaurant where they’re having a lunch date and proceeds to cross-examine Josh. It’s actually pretty amusing to watch them go back and forth, especially when Josh looks to Mindy for permission on whether or not to answer the “are you having sex?” question. He even says he would stick around and help Mindy raise an accidental baby of theirs. I didn’t phrase that romantically, but it came off cute in the show. He trips up at being asked about he and Mindy being together forever, though; he says he “isn’t a forever kind of guy,” which doesn’t sit too well with Mindy.

She calls Gwen, who is back to being her friend of convenient advice, and makes a dramatic leap to Josh calling her trash, but scales it back to him actually not being into marriage right now. Mindy always pictured herself getting married and staying that way forever, and Gwen talks some pretty good sense into her about the difference between saying “forever” and actually doing it, all while making passive-aggressive jabs at her husband trying to load the Christmas tree up on top of the car. I’m starting to like Gwen. She’s actually a good foil to Mindy’s theatrics, and now I want to know more about her as an actual character.

In Danny’s office, Betsey confesses that she wrote the anonymous complaint because she was jealous of all the guys looking at Shauna. She doesn’t feel pretty, and she wishes guys would look at her the same way they look at Shauna. Danny is possibly the worst person to open up and share your insecurities and feelings with, but he does his awkward best to reassure Betsey. He makes the mistake of calling her adorable and then has to amend it to “hot” after Betsey’s protests. Despite the fact that he never made eye contact with her, she leaves feeling a whole lot more confident, so that part’s good? I guess? This subplot was here and gone in a blink, we’ll have to see if any sort of HR nightmare comes from it in the future.

Mindy goes an extra step in her invasion of Sophia’s personal life and interrupts volleyball practice to have a heart-to-heart with her. After she’s hit in the head with a volleyball (twice), she calls all the girls over for some unsolicited sex advice. First, she talks about how teens are obsessed with the idea of eternity, and makes a really good point about that being the reason teen vampire books are so popular. I had never considered that before, but suddenly the Twilight craze makes a little more sense. Thanks for that new perspective, Mindy Project writers.

She goes into the usual spiel about how their friends and boyfriends, etc, won’t all last forever, but you know what will? Herpes. She sounds a little like the health teacher from Mean Girls, but it’s a fair point. To keep the girls safe because guys won’t always have them, she hands out condoms to the group. I’m a little uncomfortable with her snap judgment of the tall blond girl needing extra because she “looks like trouble” and “not being worried about” the dorky looking girl, but I’m choosing to believe the point of the joke is to expose rather than laugh at these stereotypes. It’s hard to tell, though, and that’s what my main problem has been with this show so far. Sometimes it tries to subvert clichés (rom-com tropes in particular) but it gets hard to tell if Mindy’s actually breaking out of the mold or just locking herself into a different one.

Anyway, the volleyball coach returns and calls security on the strange woman passing out sexual paraphernalia to his high school students. Mindy gets zip tied and lectured by the principal, which she at least admits is fair punishment. Danny comes to bail her out, and she wants to give him an orchid for his trouble—he prefers pizza—and they’re actually being friendly to each other in the hallway when Sophia and Ben interrupt. Sophia has decided to hold off on having sex with Henry, and Mindy says she made the right choice.

I am so frustrated by the fact that Mindy ends up vindicated by Sophia making this decision when she probably should have just referred her elsewhere for care if she was uncomfortable prescribing her birth control. There’s no funny plot about a fish-out-of-water adult in a high school that way, but I don’t know, I couldn’t suspend my disbelief about this to enjoy that plot.

Ben, my new favorite, is told by Mindy that “it gets better” but he doesn’t quite buy that, considering the super cute football player winking at him from down the hall. He leans in towards Mindy and whispers, “Oh my God, tell me you and him have happened” in reference to Danny. Oh no, I thought we were out of the Mindy/Danny woods now that Josh is in the picture. Please don’t let this be an indication that they’ll be pushed together into love despite their mutual disdain for each other. Danny has a lot of stuff to work out before he gets in another relationship. Mindy’s high school exploits come to a close as Sophia presents her with her very own slime.

Josh is waiting for Mindy on her steps when she gets home that night. He’s got travel-size deodorant instead of flowers because the florist was closed. It’s actually almost endearing, he must be growing on me. He starts to talk about the whole “forever” thing, but Mindy cuts him off to admit that she’s scared of it, too. She just wants there to be the possibility for forever and grandkids visiting their shared gravesite and all that good stuff. He agrees, and they share a romantic energy drink together while they discuss eventual burial options.

Last week’s episode got my hopes up about The Mindy Project, but this week’s was more of the same almost-funny, completely Mindy-centric stuff that I wasn’t sold on before. I don’t think this will ever blossom into the greatest show on television, but I think that the potential to be a good one is still there somewhere. Just not in “Teen Patient,” that’s all.

Mindy (on what book she’s reading): “This is a novelization of the film Iron Man. I thought Gwyneth Paltrow would be in it more.”

Mindy: “You should be drawing on the sidewalks with chalk!” Sophia: “Like dead body outlines?”

Morgan: “If the men in my family have one problem, it’s staring at beautiful things. And gout.”

Betsey: “Sometimes you just need your boss to tell you that you look sexy.”