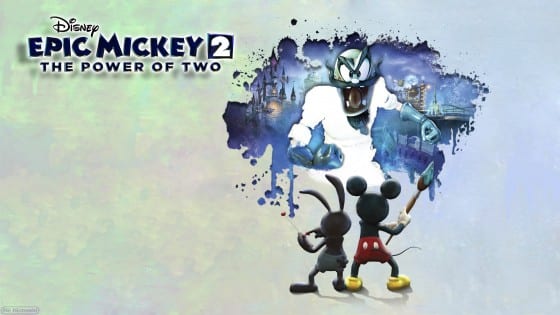 2010’s Epic Mickey is one of the few games that legitimately made me mad. Oh, there are plenty of games I play that I can’t stand; games that are so bad — but there are very few games that actually make me put the controller down in anger. You see, I’m what you would call a Disneyphile, and the idea of a warped love letter to a place and company that’s meant so much to me was nothing less than thrilling. Then I got my hands on it.
Nearly two years later and my cautious optimism for the sequel has proven unreliable — despite the game’s improved visuals, it seemingly buckles under the weight of its own problems, leading us with a messy title that could have been so much more. Somehow, Epic Mickey 2 is even worse than the original
Developed by: Junction Pointe
Published by: Disney Interactive
Genre: Platformer/Puzzler
Platform: Xbox 360, Playstation 3, Wii
What works: Great visuals| fantastic fan service
What doesn’t work: the camera is still terrible |lack of depth| bad voice acting| uninspired gameplay
[rating:2/5]
Junction Point’s sequel picks up after the events of the original game, and returns you to the Wasteland; the setting of the original game and home to Disney’s misfit and forgotten characters. The Mad Doctor has apparently changed his ways and is looking for a hero to repair the Wasteland after it’s hit by a series of Earthquakes that leave the world in ruins (you’d think citizens of a world known as The Wasteland would be okay with a bit of rubble).The doctor makes a magic television set and boom, Mickey is transported back and expected to save the world again.
That’s part of the problem really — Epic Mickey 2’s storyline is incredibly unimaginative and serves as an excuse to rehash the plot from the original. In exchange for a new plot, the game introduces silly gimmicks and half thought-out ideas like throwing handfuls of characters at you — all complete with atrocious voice acting. Worse yet, whenever the action starts getting going, the game insists on interrupting it with horribly acted cut scenes – and they’re even worse when they’re trying to convince you that the Mad Doctor trying to sing ala the classic Disney musicals is funny. It’s not.
What the game does do well is not that surprising — Producer Warren Specter and his team know and love their source material. The game is filled with nods and references to classic Disney movies and properties that may be lost on the majority of those playing the game, but long time fans will love. If anyone is going to play the game multiple times, it’ll be my fellow Disney fanatics to pick up on all of the small winks.
Unfortunately though, it will be hard for even those diehards to sit through multiple playthroughs of Epic Mickey 2 since it’s such a sloppy experience. The paint and thinner gameplay returns untouched from the first game, only with the addition of Oswald’s electrifying ability — which is almost always used to give power to machinery. The problem is that the camera is still incredibly frustrating and makes the platforming sections incredibly hard to navigate. Sure it’s been improved, but not by much.

From the main quest, to grabbing collectibles, there’s really plenty to do in Epic Mickey 2 — you just better hope you’re doing it with another human player as the AI is some of the worst we’ve seen this year. I’d constantly be making progress through the game only to have to backtrack to find out where Oswald was and how I was going to get him out of there. There’s also the issue that the characters seem remarkably inept for some of the situations they’re put against, take for instance Oswald’s stun ability which hardly ever lasts long enough to matter, and Mickey’s jumping ability which never seems to take you quite far enough.
I wanted to like Epic Mickey 2 — hell, I wanted to love it, but thanks to it’s refusal to fix some of the first game’s problems combined with its fair share of new ones, I’m left even more disappointed than I was two years ago. It’s got more than enough charm, but it’s plethora of problems make this another forgettable mouse adventure.