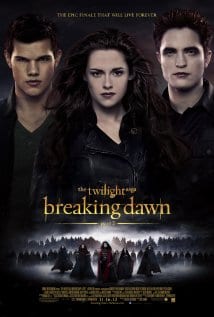 In “Anna Karenina,” Leo Tolstoy introduced the principle that “All happy families are alike; every unhappy family is unhappy in its own way.”

Nevertheless, in the first two-thirds of the culmination of the Twilight juggernaut, “Breaking Dawn- Part 2,” we are treated to the following:

Bella (Kristen Stewart) now a vampire. Edward (Robert Pattinson) totally loves her. Bella goes feeding, and is tempted by a rock climber but doesn’t eat him. They hang out with their adorable baby. Adorable baby grows at a preternatural rate to quickly become an adorable 5-year-old (Mackenzie Foy). They have PG-13 sex in their new house, which looks like it was ripped out of a Thomas Kinkade painting. There’s lots of girlie indie music. Their happy extended Cullen family is really nice to them and they share many laughs. Bella gets mad at Jacob (Taylor Lautner), but then they make up. Bella reconnects with her super nice dad (Billy Burke) and his super nice girlfriend. And on and on it goes, until you feel like if you have to watch one more minute of the cotton-candy perfection of Bella and Edward’s life together you will literally vomit high-fructose corn syrup.

The dialogue also moves very slowly and awkwardly, choppily edited so it sounds as if everyone is in a David Lynch dream sequence, and not in a good way. The only exception is Billy Burke, who somehow cuts through the manufactured tension to have a human-like discussion with his on-screen daughter. Stewart for her part continues on her inexplicably meteoric yet vanilla rise to superstardom, while Pattinson actually only seems to have half a dozen lines in the entire film, opting instead to stand on the sidelines and be the forehead that launched a thousand ships.

But it’s OK readers- for the vampire Vatican is coming! Hooray for the vampire Vatican and the hilariously insane Michael Sheen as its vampire Pope! Sheen and his merry band of Inquisitors are a campy breath of life into the picked-over corpse of this series; a vibrant shock to the system after being lulled into the gentle soft-focus coma of Bella and Edward’s Great Love. Writer Melissa Rosenberg, and director Bill Condon have a trick up their sleeves in what follows in the final third of this suckfest, and may God strike me down if I spoil it for you. All I’ll say is the end will leave Twi-hards relieved and then rest of us rolling in the aisles.

And then it ends, and happiness reigns forever and ever in Forks, Washington. When Bella tells Edward, “I love you more than anyone has loved before,” I at first could not get over the lie of it. Really, Bella? Your pallid, expressionless love is greater than that of Anna Karenina’s love for Count Vronsky? Greater than Jean Paul Sartre’s love for Simone De Beauvoir? Greater than Cleopatra and Mark Antony? Greater than Barack and Michelle Obama? But then I realized what an innocent and kind hearted lie it is, and I remembered Michael Sheen’s most excellent vampire laugh, and I got off my high-horse and went home.

You know what? If you’re not a fan of Twilight, you should still go see this movie. Go drunk, but only a little drunk, because you take your life in your hands if you ruin a bunch of 12-year-old girls’ final foray into this peculiar and most fantastic of fantasy worlds. I raise a glass to Bella and Edward’s boring happiness- now, finally, complete, so we don’t have to watch it anymore.