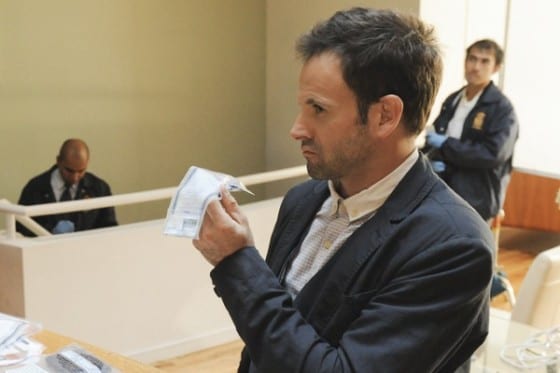 Sherlock (Jonny Lee Miller) investigates a series of murders connected to the past.

No matter your opinion of the show, I think we can all agree that the mask the killer wore was one of the most creepy, unsettling opening scenes. It’s a topic I write down to remind myself to talk about each week and somehow I manage to continuously manage to forget about it, but this week I underlined it. This show’s cinematography is beautiful and the set designers deserve some major credit in the way they’ve added to the atmospheric nature of a Holmes world. From the way his apartment is set up—oddly sparse yet filled with the essential tools that Sherlock would need. Somehow each incarnation always manages to create a living room for the detective that appears to have come straight from the novels. The interior design of the show has become a character within itself, it sets the scene, the mood and helps tell a story about the character(s) that inhabit it.

In regards to the wonderfully unsettling opening scene it felt as if it were taken straight out of a horror movie. It was maybe a minute long scene, yet director Seith Mann (who has lent his visual style to episodes of such acclaimed shows as “The Wire” and “Friday Night Lights”) shot it effectively as dark and shrouded and left a mark, which is what every show should try to do. Leave an impression; hook your viewer and run, hoping that they hang on.

The writers smartly shifted to some light-hearted humor immediately afterwards with Sherlock pulling his own version of the silent treatment on Watson. Last episode had Watson violating Sherlock’s privacy and going to a friend to gather information on Irene Adler, a sore spot for him. He has yet to forgive her for this and only speaks when spoken to. Have I mentioned how well this version of Holmes works? It’s his petulant act of anger that leads him to ditching Watson at the apartment to go and meet up with Gregson on the scene of the crime.

An affluent couple has been murdered, as we saw in the opening moments, and Sherlock believes that it’s tied to a similar case from over ten years ago that essentially allowed Gregson to climb in the ranking. It was his case and his conviction of a murderer whose technique is suspiciously linked with the current suspect. Sherlock admits this knowledge with some thinly veiled pride, trying to share his knowledge about Gregson’s past achievements. However, the ego stroking is short lived since Sherlock believes that Wade Crewes, the convicted murderer from years ago, either had an accomplice he didn’t mention, or was innocent after all.

This leads the two on a chase of possible suspects, friends who would be likely to help, any person who may have taken up where Crewes left off.

Before they can properly begin, Watson tracks Sherlock down at the police department. (Fun little note, Sherlock’s ringtone for Watson is the theme from Psycho. Oh those lovely character moments.) Understandably she’s a little annoyed at him leaving her under the pretense of getting coffee. Sherlock uses this moment to let off some steam telling her that she eliminated any goodwill that had begun to grow between the two of them, she went into his personal life without his consent and no matter her justification he cannot let that go. Sherlock isn’t necessarily angry at Watson for prying, more so he’s angry over the information she dug up and the way in which it emotionally implicates him. Irene is a part of his memory he’d rather forget, Watson is an individual who he was beginning to trust, slowly but it was happening, and she broke his trust with the one thing that lands on the too sensitive side of his mentality. The two have shouted at each other before about going back to strictly routine, to ridding themselves time spent together that isn’t necessary. This time though it hurts for both side because they’ve grown closer. They part ways to each do their own investigations.

Watson goes to the clinic that Sherlock stayed in while getting clean. She interrogates his past therapists and gains zero new information, only getting a confirmation that he was as difficult then as he is now. While speaking to the woman who ran group discussion she notices a man tending to some bees and using her knowledge of Sherlock and his hobbies, meanders on over to him to see if he has any knowledge of Irene. Initially, he feigns ignorance but just as she’s about to leave he breaks and gives her letters addressed to Irene that Sherlock had left behind.

On the case with Gregson he and Sherlock run in to more than a few possible suspects. One suspect whose apartment was found with the gun intact, one who had died years ago, information delivered by her son, and the other while not the killer had his own twisted game going on and provided an unnecessary scene yet poignant character moment. The man they were investigating, Sherlock discovers, had been keeping a foreign woman chained to the wall in the basement and it’s a harrowing, almost too shocking, scene. Sherlock’s reaction is the most human we’ve seen him so far. Any type of façade immediately evaporates from his face and he’s on his knees in an nonthreatening position, and is forced into a comforting embrace, unable to figure out what he’s supposed to be doing with himself.

The problem is just how jarring this moment is. It’s used purely as a tool to showcase Sherlock’s as truly shaken. It did nothing to add to the plot of the episode, it was never touched upon again, so what was the purpose? I felt something for the character, I grew a little more attached to Sherlock, sure, but it was an instance of emotionally manipulating the audience into a reaction rather than getting it through a natural means.

Despite it all, Sherlock must continue on with the case. Let’s talk about Captain Gregson and Sherlock, and the wonderful chemistry that Jonny Lee Miller and Aidan Quinn share. They’re fantastic onscreen together. Quinn’s almost hesitant, treading water manner of speaking works with Miller’s fast-paced, energized performance. Gregson thinks before he speaks, has a commanding air about him where as Sherlock simply blurts it out rather than weigh the possible outcomes that could accompany those words. Due to Sherlock’s recent forced detachment from the aid of Watson, it’s mainly him and Gregson solving the case, and in this case it almost works against the relationship. Sherlock holds Gregson to the utmost respect, sees him as a substitute paternal figure, looks up to him for his support and approval. Yet when information surfaces that may implicate Gregson and his old partner, his loyalty is tested against his need to solve cases.

Joan confronts Sherlock about the letters and promptly and angrily, he stuffs them in a blender and reprimands her for once again digging into his private life. He tells her that when he feels the need to talk he will, but right now they have a case to work on.

The outcome of which is pretty lame. It’s predictable in its unpredictability. In hindsight, it makes a lot of sense. Of course the kid with one line explaining his mother’s death would end up being the killer because a new character never joins an episode of a show for one line, especially in a procedural. The mother who I mentioned before? Well, she had an affair with Crewes and never told her son about it. He grew up without the knowledge until she died and he read all of her old journals and found out about his real father¸contacted him and began doing his bidding. Most of this information we’re delivered in the form of monologue, with Sherlock summarizing it all up for those of whom missed the hint.

This episode is about the past, how it can make or break us; mold us into the people we become. Gregson became a better man from his past convictions and is all about honesty and always being the better man. Sherlock’s past has come back to haunt him by Joan’s digging and it’s his past with Irene that landed him with Joan as a roommate. Everything is connected. (Not to get too Cloud Atlas on you.)

While the end of the case was anti-climatic the ending scene more than made up for it. This week’s episode had Sherlock showcasing a magnitude of emotions. There was his disgust at finding the chained up girl and his subtle inability to handle his tentative suspicions of Gregson’s involvement in the conviction of Crewes. Then there’s the grief, the underlying remorse about Irene that plagues him because as his tells Watson, she’s dead and they were close and he didn’t take the loss very well.

Just to clear things up, I do not for one second believe that Irene is actually dead. The show has built her up too much to not deliver the outcome.

This was a character-driven episode with Sherlock leading the way. Lucy Liu was still sadly underused but she did well with the material given to her. She’s slowly stripping the layers back from Sherlock’s guard as she already lies mildly bare, her demons presented to the world. While Sherlock holds a higher intellect, she is much stronger. She faces her problems head on while Sherlock creates distractions and looks for escapes. So when he told her that Irene had died, when he opened up just that small amount, it was a big moment. Maybe the confession felt too brief but the poignancy must be noticed. No matter how much information we want to gain from Sherlock as a character, as a fan, having him keep so much to himself is in character. He’s closed off, he detests vulnerability, yet it’s clear by his face that his mask is slipping and Watson has the upper hand.

Another great episode. It’s no wonder CBS has enough confidence in the show to both put in the post-Super Bowl time slot and give it another two episodes, making it a 24-episode season.