Just over a week ago, as some of you may know, something very important happened – something that undoubtedly had a massive impact on the American political landscape, and changed the lives of everyone who bore witness forever.

That’s right: “The Colbert Report” held a live election night taping, entitled “Election 2012: A Nation Votes, Ohio Decides; The Re-Presidenting of America: Who Will Replace Obama? ‘012!” What did you think I was talking about?

As luck (and more than a little obsessive refreshing) would have it, I just so happened to score a ticket to this momentous occasion, which would mark my third live taping of the Report.

This was, however, the first time that I didn’t have to get on a bus by 10 a.m. The whole “live” thing required that everyone show up no later than 9:45 at night, which meant that it was completely dark by the time I made my way into the Hell’s Kitchen neighborhood of NYC and took my place, fittingly enough, as third in line. And then, of course, was the wait.

Unsurprisingly, those in line obeyed.

hour to go at most, with at least three left to wait in the cold the line had already grown to a “might as well give up if you’re just showing up now” length. Second, it was a surprisingly younger demographic than usual that sat there shivering in the offset alleyway reserved for ticketholders. I guess that can be attributed to those unwilling to skip work or class now, on election day, seizing the opportunity to see Mr. Colbert in action. Can’t say I blame them.

The third thing of note was just how enthusiastic this group was. Maybe some of that can be attributed to the nervous excitement that hung over the line like the clouds of our breath: gloved or frozen, exposed fingers stabbed constantly, if sometimes ineffectively, at smartphone screens as the hours wore on, hushed conversations detailing results of exit polls or which states had already been won.  I’m sure this line in particular passed as quickly as it did because there was always something to talk about, always a new Twitter update to investigate, always some article about the current electoral standings and “what it all means” to skim and panic over.

But that wasn’t quite it, either. Finally ushered into the, gratefully, heated holding room where the tried and true years-old “best of” compilation played on a corner television (which at this point I’d seen twice, never mind the times I’d watched these episodes alone), it was hard not to notice just how engaged everyone was. They laughed loud and hard at every joke, nearly roared when the Colbert interns demanded we send up a trial-run cheer, and fidgeted like mad when the first hints went out that we’d be going in soon. If this was any indication, it was going to be a good show.

That’s not to say that this attention was undivided: the idea of the whole “election” thing still very much loomed, and the phones never quite went away. Not until, that is, those same interns instructed everyone to turn their phones off immediately, and to not even think about having them turned on once we entered the studio. They went so far as to require everyone to show their phones to security upon entering, pushing a button or two to prove that it was, in fact, off completely.

This was a first – although in my excitement as the doors opened and ticket numbers were called I could’ve cared less. They probably just wanted to make sure that no one’s ringtone ruined a live taping, I thought idly. No big deal.

This new regulation, though, became all the more suspicious as both the warm-up comic and Stephen himself (during the pre-show Q&A with the audience) were asked what the hell was going on with the election, only to go tight-lipped in response.

“I’m about to do an entire show about it,” Colbert quipped with a mischievous grin, already looking into the crowd for another question.

That Q&A was a particularly good one, too, as it happened. The faux-pundit emphasized that the fate of the very real money in the Colbert Super PAC was “None of your god damn business,”; that spending a week on the set of “The Hobbit” (the Tolkien super-fan is rumored to have a guest spot in the upcoming film) was the “best week of my life,”; and induced many an “Aaaawwww” from the crowd with his enthusiastic retelling of how he met his wife. (Spoiler alert on that last one: he borrowed Alan Ginsberg’s pen to write down his phone number.) 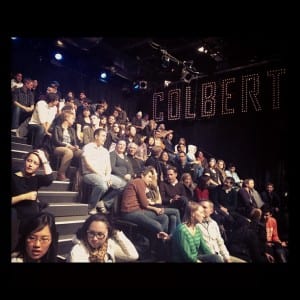 All the while the show’s crew was monitoring the progress of “The Daily Show”, with Stephen frequently, almost anxiously, checking in on Jon Stewart’s progress. The reason for that would soon become clear: we were, at long last, getting a “toss”, Stewart and Colbert bantering back and forth as one show ended and another began. Both hosts tried to quash their laughter as Stephen dramatically plugged his ears, refusing to hear any election updates (or “spoilers”, as he put it), vowing to go into the show totally uninformed in true Colbert-character style. This is, after all, the man who coined “truthiness”.

While the top story of the (half) hour was Colbert’s mother, Lorna, celebrating her 92nd birthday, it was the next topic that was what he and everyone else had been waiting for.  Of course it wouldn’t be the “Report” if this wasn’t dragged out as long, painfully, and somewhat cruelly as possible. Colbert hinted that the projected winner of the election had come in, and it was sure to produce “Liberal tears.” That could only mean that CNN had projected that Animal Planet had predicted that it was……………………..Barack Obama.

In this instant I understood why our phones had been taken away. As the crowd immediately leapt to its feet, the loudest cheering I’d heard at any taping (“Report” or “The Daily Show”) went up, and we celebrated the news that the rest of America must have already known.

While his uber-Conservative character whined and resigned himself to defeat for the rest of the segment, the moment we went to 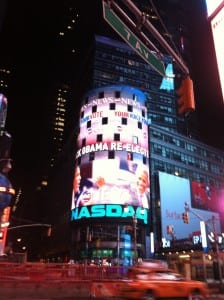 commercial the “real” Colbert came alive. As the in-studio music went up, he popped up from his desk, a mile-wide grin on his face, with arms raised in victory. He spontaneously bounded across the front row of the audience once again, doling out another round of high-fives. Maybe there would be no parties in the streets that night, but relief and excitement were palpable here, and even someone as skilled as Colbert couldn’t contain himself for very long.

That was exemplified, too, when taping ended. After sign-off and the final round of applause, Stephen again came around to the other side of his desk. He sat heavily, as if suddenly unburdened, on the raised onstage platform, and said “Wow, what a crazy two years, huh? What a crazy two years.”

He paused as if to consider all of us, and it was then that the studio’s set-up became all the more noticeable. Suspended above the desk was a white net, half-full of balloons in various shades of white and tan. The stage, on the audience’s left, was set up like a coffeehouse (complete with a checkerboard-topped table for two and shelves adorned with varieties of java) with a chalkboard dubbing it the “Colblogger Café”. Despite the fact that Colbert’s guest was, in fact, a Conservative blogger, both of these props had apparently gone unused.

With the past half hour gone in a flash, this for the first time presented the consideration that, even in the largely fictitious world that the show’s host might have lived in, in the real political world there were any number of outcomes for a given situation. As Colbert himself summed up at the top of the show, “Anything can happen! Romney could win, Obama could win, and…that’s it, those two.”  He was, in fact, pointing out the obvious: there were two possible outcomes of this election, and, being a live show on a night when results were only just coming in, they would’ve had to prepare for both outcomes.

It almost made me wonder what the show would’ve looked like had Romney claimed victory after all. Would character-Colbert have made that victory lap around the studio, balloons falling and music blaring? Would the comic himself have been able to stay in character through the segment, or to contain his own underlying opinions once the cameras stopped rolling?

Fittingly for the show, however, there wasn’t much time for analysis. Soon the host was on his feet again, seemingly re-energized. “Do we have time for one more quick question?”

A woman in the first row shot up almost as soon as the words left his mouth. “Were you nervous?” she asked.

“Yes,” he said, a relieved smile breaking across his face to match. And that was that.