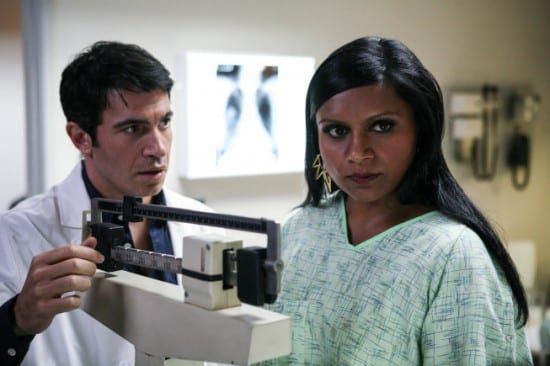 Five episodes in, and I still can’t decide how I feel about this show. I want to like it, but I can’t say that I actually do yet. I’m not sure if it’ll all turn around for me in an episode or two, but right now the best I can say about The Mindy Project is “Eh. It’s alright.” And that’s exactly how I feel about this particular episode as well: there were moments and certain lines that made me laugh, but overall it just felt really average.

The episode starts with Mindy and Josh together in her bedroom. She’s trying to be cutesy, dressed in only his button down shirt, but she has to yell to wake him up to notice. He decides the sight of her is enough to invite her back to bed to play hooky together all day, but when he goes to slip on his jeans to get breakfast first, he accidentally puts Mindy’s on instead. Josh is surprisingly cool with this, looking at it as a clothing swap situation, but Mindy freaks out, particularly about the size of her waistband compared to Josh’s actual body. Playing hooky is canceled on account of a lost sexy vibe they had going.

At work, Jeremy (who, by the way, I still have to call Hot Doctor in my head while I watch the show because I consistently forget what his name actually is) pesters Mindy to get his watch back from her apartment after their last “encounter.” They continue to bicker as they talk to Danny, who’s camped out in Dr. Shulman’s office doing his work. He’s there trying to get a sense of what it will be like to work in there as boss when Dr. Shulman retires, and both Mindy and Jeremy laugh him down. If Shulman does retire soon, it’ll be interesting to see how the power dynamic plays out between these three with who gets promoted.

After Jeremy’s attempt to butter Mindy up to get his watch back, he turns to Morgan to consult him about his criminal past. Namely, he wants to know if Morgan can pick the lock to Mindy’s apartment so Jeremy can get his watch back. He tells Morgan it’s so he can decorate for her surprise half-birthday party, which is somehow a valid reason. Doesn’t Morgan have parole or something to worry about here?

Mindy’s crisis du jour is that her regular gynecologist Dr. Penney is retiring, so she needs to find a new one. Dr. Shulman refused because they have a personal relationship. Conveniently, Danny feels roughly the same amount of affection towards her as he does towards the lamp in their office, so she asks to become his patient. He doesn’t think she can handle being his patient, though, considering the “un-lamp-like” feelings he believes she has for him. I get that it’s his character, but man, Danny is kind of a conceited d-bag. Please, writers, don’t let their squabbling turn to all-out flirtation.

Jeremy, dressed super inconspicuously in all black B & E garb, meets up with Morgan at the elevators. I would just like us all to appreciate that Morgan brought a T-bone steak “in case of guard dogs.” Mostly, Morgan’s intensely awkward and thus, annoying, but every so often he gets a joke like this and I think hey, he’s not so bad. Betsey ends up tagging along too, with a box full of party decorations that may or may not be the lost and found box. We don’t know enough about Betsey yet; I think she’d be an interesting character to get to know, instead of relegating her to the background so much.

The pre-exam consultation between Danny and Mindy is standard health procedure, only with a whole lot of hostility in the questions and answers. The whole exchange is awkward on two levels for me: one, I hate answering those questions at my own doctor’s appointments so I don’t really want to experience it secondhand here with Mindy; two, the way they deliberately try and make the other one feel uncomfortable just ends up making me feel uncomfortable watching them. If that was the goal, then it was a well-done scene.

The rest of the questionnaire is even worse. First, Mindy fibs about her exercise routine, which, okay, is the part that’s amusing for me as a self-admitted gym avoider. Then she admits she’s planned to have four kids (she’s even got the names picked out), but Danny quickly stomps all over that dream with his rather intense breakdown of the next decade of her life, which only ends sadly for Mindy. However you feel about the characters, watching Danny tear down something we know Mindy’s dreamt about is rough.

Interspersed with the Danny/Mindy conversation are scenes at Mindy’s apartment. Jeremy comes clean almost immediately about his true motives for breaking in and starts scouring the place for his watch. Morgan leaves because this could be strike two for him, but Betsey sticks around.

After her pre-exam consultation with Danny, Mindy ends up having another internal crisis laying on the floor of her office. This time Gwen steps in and saves her. She stops by and reassures Mindy that things don’t always go as expected and maybe she’ll meet the guy to have kids with sooner than she thinks. Hello, it is entirely possible to have a kid without the guy, especially considering Mindy’s apparent economic affluence. Isn’t that basically the whole plot of Baby Mama?

In Mindy’s apartment Jeremy is having trouble finding his watch. He ends up getting in an argument with Betsey, who tells him her opinion of him after today has been lowered. Since he was sleeping with her friend for so long, she now has to rethink Mindy a bit, and that makes her dislike Jeremy completely. It sounds silly typed out like that, but I was actually impressed with Betsey’s anger. We hadn’t seen much of her, granted, but I didn’t peg her for the confrontational type. She had found the watch, and gives it back to Jeremy before leaving the apartment in a huff. Jeremy actually looks hurt and conflicted, which is probably new for him. He ends up putting the watch back on Mindy’s nightstand and leaving too.

Gwen, the best friend we continue to know barely anything about, isn’t the only one who counsels Mindy through her motherhood crisis; Morgan, who came in to lie terribly about an alibi for the last couple hours, ends up laying down some “prison wisdom” for them. First, it’s some nonsense about sewing two blankets together if you’re a tall convict, but then it’s for Mindy to invent a warrior part of herself that can take on anything that is thrown at her. He tells her to come up with a name and keep it secret, and she actually feels better.

Better enough to take on Danny head-on in the exam room, at least. At first, Mindy’s all cool and confident, but she balks at the scale. Danny doesn’t help matters by weighing her down from the heaviest the scale can go rather than the normal increasing from zero method—it also would provide an inaccurate measurement. Mindy lets Beyonce Pad Thai (her warrior name, which is probably the greatest thing to come out of this episode) take over, and she can take on anything.

She gets Danny to open up about his parents (his mom cleaned motels and he hasn’t seen his dad in 25 years—I sense a tragic past that redeems him for his terrible behavior now) and throws him when she says she’s glad they have a close enough relationship for him to share. He gets flustered, and is ultimately defeated by the breast exam portion.

Jeremy arrives too late for his patient’s appointments that afternoon—he blames it on his lack of a watch, which Betsey notices with a smile—but he’s just in time for Mindy’s triumphant emergence from the exam room. Danny, thrown for a loop and clearly embarrassed, is leaving and taking a few days off to recover. Doesn’t he have patients he needs to see? Mindy ends up winning herself a small victory at least, and there’s a typical happy-til-the-next-shenanigans ending.

It’s hard to articulate what exactly makes this show not good for me; I think it’s a combination of the  lack of exploration for the other characters and jokes that don’t quite land right. There were some good moments, as there have been in all the episodes so far, but The Mindy Project has a ways to go before it fulfills what I saw as great comedic potential.

Favorite Lines from “Danny Castellano Is My Gynecologist:”

Josh, to Mindy: “You look like Drew Barrymore in one of those movies I hate.”

Mindy: “As long as we’re indulging fantasies, I’d like to introduce you to my husband, straight Anderson Cooper.”

Morgan: “They used to call me the Loch Ness Morgan. Mostly because I’d show up blurry in photographs.”

Shauna, to Jeremy: “Your patients have been waiting so long some of them moved into a new trimester.”