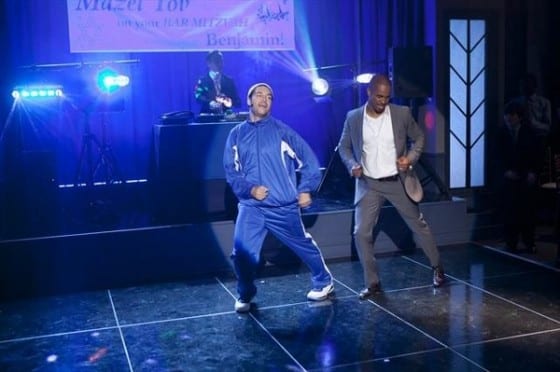 “I will not spend another Tuesday fighting a rat for what is rightfully mine.” – Max

That line right there sums up the episode. How? I don’t think I can explain but I guarantee that if you watch the episode you’ll understand.

It was an episode full of hilarity, absurdity and fun and had me racing to write quotes down.

Happy Endings is a show that doesn’t accurately portray the everyday life of a group of friends, and if it does, please point me in the direction of those individuals because I’d love nothing more than to know a real like Jane or Max. It is more than anything, like a heightened, exaggerated sense of reality and that’s how it works best. Unlike other shows, it falters the most when it tries cementing itself as run-of-the-mill sitcom rather than a wacky, meta humor- filled show. There are certain aspects that make an episode of this show great.

Often times shows stick to what’s comfortable, scoffing at the idea of deviating from the obvious chemistries and likelihoods. TV shows seemingly come packaged with built-in pairings that we’re forced into seeing interact weeks on end, rather than mixing up talented groups of actors.

Happy Endings, however, is unlike other shows and enjoys throwing wrenches, sometimes multiple, into strategies that have worked throughout television history. Sure, Alex and Dave were paired up this week again and so were Brad and Max, but on top of that Jane was interacting alone with Dave, Penny with Brad, and the group shared scenes together. So the solidified favorite pairings stay all the while keeping the audience open to different possibilities.

Despite playing it safe with the couplings, writers Dan Rubin and Lon Zimmet managed to keep them from becoming boring and predictable. I’ve been very vocal about my distaste in the re-visiting of the Dave and Alex relationship. While Zachary Knighton is perfectly fine as Dave and generates plenty of laughs, the pairing has a tendency to drag down Elisha Cuthbert whose character and performance, when rid of Dave and their romantic subplots, particularly got to shine last season. So color me shocked that this week’s episode actually worked with the two of them, highlighted their strengths as actors and performers, and managed to elevate an already funny episode rather than be the one misstep once again.

The aspect of Dave that’s so funny is just how ordinary and mundane he is. So when he brought out two boxes of puzzles to do, a pastime that I will never, ever understand the point or fun of, it was a joke well done.

This episode also, thankfully, allowed Cuthbert to shine. Whether it was her locking herself in a house with paint fumes and no cracked windows, packing an alarming amount of condoms, or her arrest at the airport after believing the fake tickets to Paris were real, all showcased her brand of quirky, ditzy humor and all showed her on her A-game.

As the last scene of them rolled out with the two in handcuffs sitting outside the airport after their ruined attempt at a spirited, romantic getaway, they talk about how it doesn’t matter that they didn’t make it to Paris because at least this time around they’re trying. While it’s a sweet moment for a pairing I typically could give or take, more than that it’s a funny little satirical nod to romantic comedies. Sure, these two are in the show’s mind the couple to root for (not this Jane and Brad fan) and they’re the two that will be given the most “romantic” material. However, despite the clichés that they pairing may end up saddled with they’re not a rom-com couple. They’re offbeat, they’re boring, and they’re kind of gross as Alex points out in the beginning. As long as showrunner David Caspe continues to portray them as the main, centered couple, I hope he continues to show that rather than being in this otherworldly, all-consuming, soulmate driven love that they are a couple oddly suited for each other and each other’s oddities—how they’re mucking about and trying to make things work. Their personality traits and the show’s premise is about being over the top which makes it great that what’s so over the top about Dave and Alex’s relationship is just how stale it can be and how much effort they have to put in to make it otherwise.

Juxtapose this with Brad and Jane’s few moments in the episode where their sexual hijinks are exposed. They’re, like Penny said, not like other couples in movies or television. They seem completely in love, completely in lust and are genuinely fun to watch. They’re not a couple who are purely used for their couple status but are instead used as wonderful acting, tag team gold.

Boys II Menorah may be one of the best things I’ve seen on television in a while. Adam Pally and Damon Wayans Jr. definitely work as a pairing. They’re funny, bounce off each other well and both are very good at the slapstick style of comedy. Adam Pally, in particular, isn’t afraid to look disgusting or weird and that works to his favor, as Max isn’t known for his abundance of care.

Max has begun working as an emcee for Bar Mitzvahs and Brad thinking that it looks like a fun gig teams up with him to become the Boys II Menorah. The scene with all of the friends watching Max work also allows for some funny exposition about how Max always seems to get the jobs no one ever knew existed such as salad back and funeral seat filler. Was it necessary? No, watching Max do the dradle spin was entertaining enough, but the flashback to Max at a funeral fake crying and getting the dead man’s name wrong is funny enough that it doesn’t matter that it was used purely for exposition’s sake. The audience knows Max likes his odd jobs. We watched him as an unlicensed limo driver for parts of the past two seasons, but it’s also nice to see Pally hamming it up.

Max doesn’t take it well when Brad, caught up in the fun of the job, performs the draggle spin—Max’s signature move—and ends up stealing the spotlight.

It’s a weak conflict, people don’t fight about these type of things (or at least I’d hope not) but that’s what makes it hilarious. Of course Max would be mad at Brad for stealing a move, of course the two would lamely dance battle it out at the end of the episode, of course the two would resolve the issue and decide to both quit since they consider fighting each other a hate crime. It’s ridiculous, but it works within the confines of the show.

3. The meta and dirty jokes-Check

Okay, as an audience we all laugh at sex jokes, right? It’s a bit of immaturity that we grant ourselves. Who cares it it’s a little crass, a little typical; if it’s funny, it’s funny. Do you know what’s funnier? When shows get away with sex jokes that typically don’t get aired on networks. So when Jane mentions Brad’s dancing going into her buzz bank, it’s funnier, because how often do you hear female characters saying things like that on other shows. What shows have such sexually assured yet not sexualized female characters? When Dave comments on how Alex used to be lazy, wear sweatpants all the time, and used to phone it in when it was her turn to go downstairs, it’s funnier because it was worded in such a way it slipped by censorship.

This show is brazen, it’s quick-witted and it makes sure to not only make the joke but to make sure that the audience is in on the joke. The problem I’ve had in the past with Community is that while it is unfairly underrated and supremely funny, a lot of jokes are polarizing. Happy Endings on the other hand is up-to-date with pop culture and makes multiple references throughout the show, treats the audience as if they’re intelligent, and is wonderfully meta and still feels inclusive, rather than trying to aim for only a certain type of audience member.

The meta jokes are fantastic in this episode. When Jane mentions her buzz bank and Penny comments on her and Brad not being like other couples on TV, it’s a nice shout out to critics and fans alike who have said the same thing. When Dave comes over and speaks to Jane about surprising Alex and Jane waves Brad and Penny off as doing their own thing this week, it’s another little bit of breaking the fourth wall bit where it’s almost acknowledged that it’s a TV show and those are two characters, not often paired, that have their own intertwined storyline this week.

The drawbacks of this episode were sparse. Penny was on the short end of the stick this week being idolized by pre-pubescent Jewish boys instead of falling in love with a rabbi which had been her initial intention. I could always use more Jane and Brad being the best couple on television but Jane alone more than made up for it when being tazed by a cop, she delivers the great line “You fools. It only makes me stronger.”

This was a sharp, well-paced episode that had me laughing more than not. I hope the ratings begin to increase because if we’re forced to endure eight seasons of Two and a Half Men and the criminal way in which they’re forcing How I Met Your Mother to continue despite it being way past its prime, we should be allowed the reward of more than three seasons of Happy Endings. There are few gems of comedy on primetime television (Wilfred, New Girl and Parks and Recreation to name a few) but all of the really good ones are often times severely underrated and need all the viewer support they can get. This show is worth the effort of reaching for your remote and tuning in for a half hour that will put you in a better mood than you were in previously.