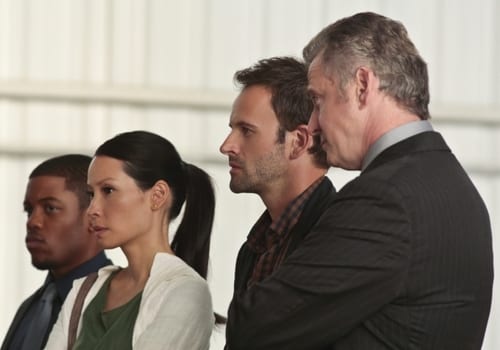 Sherlock (Jonny Lee Miller) and Joan ( Lucy Liu) are on the case of the mysterious plane crash.

Sherlock Holmes is bored and is listening in on multiple police radios in order to hear about the next investigation, preferably a murder, which will pique his interest. This is how the episode starts and it makes a viewer wonder, how would an Elementary version of Holmes act if he were to be bored for more than two minutes of screentime; what he be like for an hour?

Holmes is hyper-aware, hyper-sensitive to everything and everyone and the idea of him having to be still and shut himself down from noticing and identifying is simultaneously fascinating and scary. How would he act? How would Watson handle so much pent-up energy? Could Robert Doherty and co. keep the interest up in a homebody Holmes for an entire hour? Am I the only one who now desperately wants this style of an episode to appear during the course of the season?

As Watson and Holmes listen to the scanners they hear that there has been a plane crash and Sherlock, now giddy, races to get ready, ushering Watson along“ despite the fact that typically speaking a consulting detective isn’t necessary on a crash site.

However once on the beach where the plane has crash landed and after brushing off Captain Gregson’s attempts to pacify Sherlock and make him go home, Sherlock notices something off about the scene. There’s a man who appears to have been killed by a blunt object to a head, a wrench he guesses, before the plane actually crashed. Sherlock believes that the killer was on the plane.

Watson isn’t buying any of his shtick this week. Earlier she had mentioned that Sherlock’s father had invited them to dinner, which he dismissed as even a remote possibility. Now while on the crash site she believes he’s stalling as he puts far too much energy into the grains of sand. She thinks he’s stalling; he thinks they’re helping complete a story. This argument carries over into the police station where Sherlock rambles on about the mutual disdain between him and his father. Sherlock tries to convince Watson that his dad doesn’t love him, doesn’t care about his well-being, he just views their familial ties as some sort of contractual arrangement and he follows it through by sending him to rehab and finding Watson to be his sober companion. Although each word is spoken with bitter undertones, the show is very clear in making sure that this isn’t some act of late petulant rebellion against his dad, but is instead a reaction to his father being a serial absentee.

The two are called in by Gregson after the police are alerted to a black box that has recorded all of the audio on the plane as the crash was taking place. After listening Sherlock decides that he was wrong and that instead of being killed on the plane, the man was killed somewhere else and stowed on the plane and the murderer is still alive. It was the weight of the man in the plane that caused the imbalance which caused the crash.

While working the case out, Watson is making a deduction of her own. She asks Sherlock if he’s afraid of flying which he scoffs at, Jonny Lee Miller getting to play exaggeratedly exasperated is hilarious, and he has a wonderfully malleable face. Despite him brushing the accusation off she continues saying that on the beach he wasn’t himself, focusing on the sand rather than the debris, and that typically the walls would be littered with photographs of the evidence yet he hasn’t hung a single photo of the crash. He once again ignores her but the viewers can tell she’s struck a nerve.

They continue their investigation by looking into competitive companies in order to find motives of murder and suspects. Along the way they meet with a man who builds model planes and the glue is so pungent that Holmes must cover his nose with his scarf because as he reminds Watson he’s under specific duress to not get high. These are the things that make this version of the duo, Holmes in particular this episode, so enjoyable to watch. It’s the little things, the quirks, facial expressions and nuances that make this Holmes so comfortably familiar and yet also a total stranger. Viewers can watch him and know that this is in fact another revival of the Sherlock character and pinpoint characteristics that make him so, yet also distinguish that he’s a separate entity all together.

Later during the night Watson prepares to go to the dinner with Daddy Holmes despite Sherlock trying to dissuade her, and it appears that she should have taken his advice. Once at the restaurant she meets who she thinks is his father and a couple of brief moments into the conversation, after a very tongue and cheek question about the sex Watson and Holmes are having (nice joke from the writers to the naysayers) that she realizes he’s a fake. He tells her that Sherlock hired him to play along because he knew that his father would never actually show so the prank would work.

When she gets home she’s furious with Holmes for the trick he’s pulled. He tells her that she should’ve trusted him when he said his father wouldn’t show. She retaliates by saying that after weeks of living with him, essentially being glued to his side, she still barely knows him and how is she supposed to trust someone who’s still technically a stranger? He has no answer and goes about his business alone. It’s a quick scene, but important, and Lucy Liu plays it aptly as the tired woman who’s tried all she can to help and is throwing in the towel for the night.

Number One. If it’s already been weeks, how much longer until Watson is no longer needed as a sober companion? At the start of the series Joan had been hired for a six-week period and now, six episodes in, we learn she’s been with him for weeks. What are the writers going to do in order to explain why she’s still around after her allotted time is up and how are they going to accomplish it soon considering they can’t slow time down too much after alerting viewers how much time has already passed? There seems to be two big options. They can A, have the two become such close friends that they decide that they should continue living together as roomies, totally disregarding any other type of life Watson had. Or they can B, have Sherlock relapse which would require Watson’s assistance for a longer time and allow the writers more time to decide how they’re going to make the two close enough that it would be plausible for them to live together.

The other concern this discussion brought to light is how the difference in quality between character moments and procedural moments is still staggering. Not even to slight the criminal, deductive portion of the show, the character moments are just so good, so interesting and compelling that it makes the rest of the plot so much less so. Watson and Holmes are wonderfully crafted characters and when given the depth that Doherty has given them they almost fly off the screen. They’re so watchable, so instantaneously likeable and charming, that it makes it difficult to care about the mystery side of the show.

During his Watson-less time, Sherlock and Detective Bell have found a new prime suspect. Sherlock interrogates him saying that he’s been trafficking cocaine between flights and he would know what amount of weight would cause an imbalance in the plane, which is what caused the crash from earlier. Sherlock believes he killed the man and sabotaged the flight. The man denies it saying that he was with his boss during the incident so there’s no way it could be him.

That’s what they all say.

Despite the case taking up a large portion of his thought process, Holmes is bothered that Watson is still mad at him so he decides to disclose to her his secret fear of flying. However, he says that it’s not some irrational paranoia but instead a sensory overload. When he gets on a plane he notices everything and anything that could cause a catastrophe. It’s another instance where his gift is also a curse. She, however, tells him she’d already figured this out, so it serves as a symbol of trust.

No matter, the fantastic character exploration moment is over and there’s still a crime that needs loose ends tied up.

Because of the sand from earlier and the smell of glue that Sherlock had picked up on, they nail their killer whose motives are not entirely explained. It wasn’t the best procedural the show has ever done. Despite a promising first half the second ends up being wrapped up too quickly with little explanation as to the multitude of whys that hangs over the case.

Meanwhile, Watson visits Allister, that actor who pretended to be Sherlock’s father, at the bookstore he works at to gain more information. He divulges that he and Sherlock are actually old friends and he knew him during his darkest moments. Sherlock, it appears, had turned up on Allister’s doorstep so high that he could barely walk straight or form comprehensible sentences. He tells Watson that she’s greatly appreciated by him and that Sherlock isn’t the easiest person to understand but his friendship isn’t one to just toss away because it’s not too often that you get someone like him in your life. Watson, before she leaves, asks for one more question though about a name that Sherlock had mentioned in his drug-induced stupor to Allister.

As Watson confronts Sherlock and asks him about Irene Adler, we realize the viewers are getting their first look at his Achilles heel.

Let’s talk about Irene Adler. Despite my devotion to the Sherlock Holmes world, Adler is a particular character that’s been horribly bastardized ever since her first and only appearance in the Sir Arthur Conan Doyle novels. She was perfectly fine in the first of the Guy Ritchie films when she was played by Rachel McAdams. She wasn’t so fine when she was fridged in the second installment. (Fridged is when a female character, often time lover, is killed off, sometimes in horrific ways, in order to cause man angst for the protagonist.) In the BBC Steven Moffat version, Irene Adler starts out as a daring, strong female character, and ends up at Sherlock’s mercy and a disservice to female characters and feminists everywhere. Obviously, this character doesn’t have a fantastic reincarnation track record.

I’ll understand if they make Irene a love interest that broke Sherlock’ s heart, and I will understand if she has a multiple episode story arc rather than being a baddie of the week. What I will not understand is if the writers continue with the trend of making Sherlock the one with the upper hand. The pivotal aspect of Irene was always that she was the one who  bested Holmes. Make her strong, writers!

This was a very strong episode once again although its failings, once again, resided in the procedural portion of the show.

Next week there’s Adler and man angst, who isn’t looking forward to that?