Big stickers, shiny stickers, and even multicolored flashy stickers – the world of Paper Mario: Sticker Star is full of stickers for you to find, peel, and use. It’s every sticker collector’s dream come true, and it once again shows how Intelligent System makes the most of the fact that the game’s world is, well, made out of paper. But as fun as it is to explore, however, Sticker Star suffers from a few design choices that can sometimes leave players feeling licked.

The game begins during the Mushroom Kingdom’s Sticker Fest, held in celebration of the arrival of the Sticker Comet. Wanting its wish-granting powers, Bowser attempts to steal the comet, but instead shatters it into pieces releasing six Royal Stickers, steals one for himself, and runs away with Peach. Teaming up with a sticker sprite named Kersti, Mario embarks on a quest to get them back and rescue the princess. It’s not a very creative story, but it provides a reason as to why stickers are the core of the game.

Once again reinventing how the series plays out, Sticker Star makes away with the usual gameplay elements that have made the series play like a typical RPG. The game’s overworld map is like that of Super Mario Bros. 3, and completing a stage by finding its comet piece unlocks the way forward. Turn-based battles are still triggered by running into enemies, but battles won’t give you any experience points, nor will Mario level up or learn new attacks. Instead, each sticker you pick up acts as an attack or ability Mario can use during each turn. 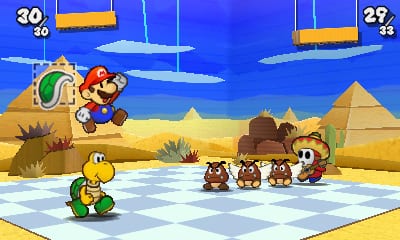 Stickers are one-time use items, so you’ll need to constantly make sure your sticker album is full of them before entering battle. But, because battles don’t really net you anything except for coins, (which are used to buy even more stickers), battles themselves feel detrimental to your progress as they only deplete your sticker supply. You’ll find a mix of strong (shiny) and weak (plain) stickers in each level, and they will always reappear once you reenter a stage, but it’s quite annoying when you save up a bunch of rare stickers only to end up having to use them to fight some weak Goombas. If you’re trying to conserve stickers, you’ll end up running away from battles as much as possible.

Aside from using them in battle, stickers can also be used to solve various puzzles in your environment. Kersti’s sticker powers let Mario “paperize” the environment, letting you stick stickers on to certain places or peel pieces off the scenery. For example, at one point you’ll need to peel off a piece of a wall, flip it over to reveal a hidden door, and stick it back on. Other puzzles get trickier, and you’ll often get stumped only to realize you need to paperize. The game doesn’t have a good hint system, so if you don’t pay attention to your surroundings or use a bit of logic, you will get, pardon the pun, stuck a few times.

Taking this puzzle concept even further, the game also introduces special stickers that you can create from “things” such as refrigerators, fans, and other household items that you’ll find. These stickers may let you pull off powerful attacks in battle, but their main role is to solve puzzles to move on with the story. The problem is that while the game gives you plenty of things to turn into stickers, it doesn’t let you experiment when finding solutions. You might go ahead and stick a radiator sticker onto a mound of snow expecting to melt it, but the game wants you to use another sticker you might not have realized would work. 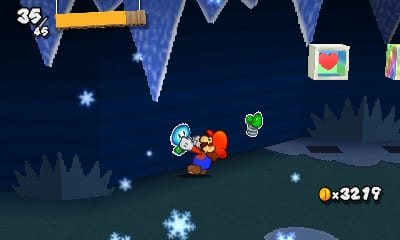 Further adding to the game’s strange design choices is that buying things to create stickers with isn’t cheap, so you might want to save your game before purchasing one. However, the game auto-saves every time you leave a stage, meaning this strategy won’t work. So not only are you stuck with a large thing sticker taking up space in your album if your solution is wrong, but you just wasted money and time. Trying several times to solve a seemingly-straightforward puzzle that could have been designed with several solutions is frustrating.

Boss battles, too, involve a bit of trial-and-error. Every boss has a special weakness against a thing sticker, but you won’t know what that weakness is until Kersti chimes in with a hint minutes after you start the battle. You’ll either need to run away (yes, the game lets you run from some bosses too), or restart your game and get the sticker you need to win. But if you never ran into the thing you needed, you’ll need to backtrack and search for it or else face losing all your stickers in a battle against an enemy with a health bar five times the size of yours. Bosses are clever, sticker-powered versions of Bowser’s minions, but just the act of figuring out how to defeat some of them is more tedious than fun.

However, once you figure out how to fight a boss or how to solve a puzzle, you can’t help but smile at the game for how it pulls you right back in. Levels aren’t that long, but their size is perfect for a portable title. Whether you’re floating down a river, participating in a gameshow, or purifying a haunted house, what you’ll end up doing in levels is always fresh and exciting. And since the environment is made up of flat layers of paper and cardboard stacked in different ways, the 3D effects easily make all the game’s colorful graphics pop right out.

You’ll hear jazzy renditions of popular Mario songs as well as brand new compositions that further invite you into its world. Its cheeky dialogue also perfectly embodies the humor the series is known for. (When was the last time you heard someone refer to Kamek as a hipster?) You won’t be burdened by many cutscenes, but when they happen, you’ll be in for a treat.

And that’s what ultimately makes Sticker Star such a great game. For all its strange design choices and frustrating moments, it provides players with that familiar Mario charm that makes playing it so worthwhile. It isn’t a perfect game by any means, but Sticker Star has plenty of high points that push you to keep going to discover all it has to offer.