A lot has changed over the past five years. While Master Chief’s been cryo-snoozing, Call of Duty claimed the top spot on Xbox Live, customization and perks have become a shooter standard, and the Covenant has been all but forgotten. But perhaps one of the biggest changes in the online shooter world was the passing of the Halo torch after Bungie’s departure from the series. Instead of letting its flagship franchise gather dust on a shelf like an over-sized, Legendary Edition Master Chief helmet, Microsoft created 343 Industries for the sole purpose of continuing work on series. While 343 Industries is responsible for the creation of Halo: Waypoint, Halo: CE Anniversary, and multiple map packs for Halo: Reach, they had yet to make a Halo title uniquely their own. Faced with the intimidating task of keeping the series fresh without altering the essence of the franchise, the fledgling developer stepped up to the plate and amazingly, knocked it out of the park.

The story picks up approximately five years after the events of Halo 3. Master Chief and Cortana are still awaiting rescue aboard Forward Unto Dawn. After a seemingly random encounter with a Covenant vessel, Cortana awakens Chief and all hell breaks loose. However this time, instead of landing on a “Ring” world, Cortana and Chief encounter a completely new planet with its own unique secrets.

Developed by:343 Industries
Published by: Microsoft
Genre: First-person-shooter-
Platform: Xbox 360
What works: The familiarity of Halo seamlessly blended with contemporary shooter concepts creates the game that fans of the series have been waiting for since Halo 2.
What doesn’t work: Too few multiplayer maps and Spartan Ops missions make the initial out-of-the-box content feel limited.
[rating:4.5/5]

One glaring difference between Halo 4 and the previous Halo titles is the story. Let’s face it, while Master Chief has spent a lot of time saving humanity, the notion of being human has never really been a part of Halo, that is, until now. Halo 4’s plot is not a one-dimensional, defeat-the-bad-guy-and save-the-universe excuse to kick a lot of alien ass. Instead, the narrative is more focused on the relationship between characters, namely Cortana’s very human, emotional relationship with Master Chief. The UNSC has moved on over the past five years, developing newer generations of Spartans, making Chief appear less like a mythic warrior, and more like an older, visibly worn veteran. This, coupled with Cortana’s growing mental deterioration into rampancy causes many to view the pair as antiquated, no doubt a metaphor the entire Halo series itself. The character animation, comparable to that of L.A. Noire, complimented by the very talented voice actors believably sell the script, providing the game with the most engrossing and emotionally engaging plot of any Halo title. 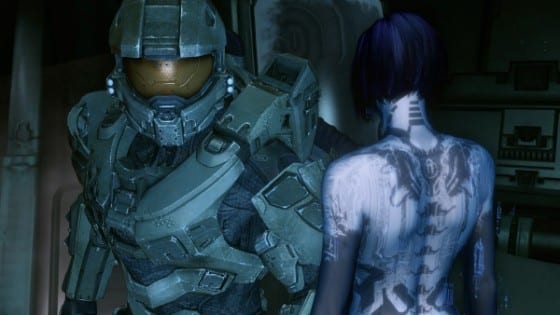 Cortana and Master Chief, sittin’ in a tree…

But don’t get me wrong, there is still a lot of alien ass kicking. It’s evident within the first few minutes of the campaign that the game retains the feeling of playing a Halo title. The franchise’s brilliantly simplistic mantra of balancing guns, melee attacks, and grenades still permeates the experience.  One obvious difference however would be the level of difficulty most Halo players are used to. When kicking it up from Normal to Heroic, enemies in Halo 4 are far tougher than they’ve been in the past, performing tactical maneuvers on the fly such as flanking and retreating based on the players behavior. Furthermore, rather than detract from the core Halo equation as many feared it would, 343’s slick additions such as new armor abilities, grenade indicators, new weapons, and so forth only serve to improve the experience.

The well-paced campaign unfolds across a pleasantly varied range of different environments, providing a great balance of on-foot and vehicle-based action sequences. While this variation does help prevent an overall feeling of repetition, it’s tough to ignore that despite how advanced forerunner technology is, it’s often easily controlled with the press of a couple buttons, and to save the universe, you’re going to need to press a lot of buttons.

When they’re not pressing big buttons or shooting aliens, it’s worth it for players to stop and take notice of their senses.  Halo 4 is downright gorgeous. The difference in visuals from Halo 3 to Halo 4 is a shining example of just how far developers can push the limits of a single console. Not only is Halo 4 far and away the prettiest title in the series, but it’s arguably one of the best looking games on the Xbox 360. Halo 4 doesn’t just offer up treats for the eyes, it offers ear candy as well. Every sound has been completely overhauled. Weapons sound meatier and more lethal. Enemy chatter sounds more alien and threatening. The musical score, which ranges from thrilling to haunting, is as new as it is identifiably Halo. 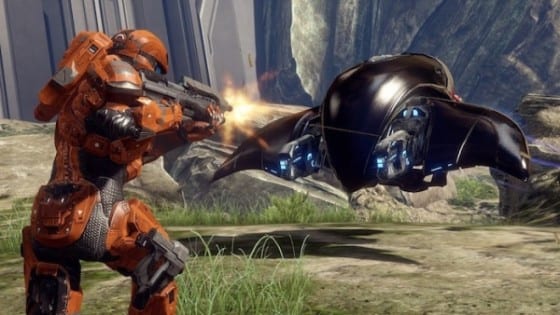 Splattering friends has never looked or sounded this satisfying.

Like previous titles in the series, the real meat of Halo 4 is in its multiplayer.  Fan favorites like Team Slayer, Oddball, and CTF, have of course made a return and are quite similar to their previous iterations; the only major difference being that certain strategies need altering due to loadouts and ordinance drops, but we’ll get to that in a minute.  The new game types include Regicide (a free-for-all slayer where greater points are distributed by killing the scoreboard leader), Flood (a more detailed and balanced version of zombies), and Dominion (think King of the Hill with upgradable bases), which has replaced Invasion. While varied and conducive to game types, there are sadly only ten different multiplayer maps available out of the box.  Nine more DLC maps are said to be on their way, but more disc content is always easier on the wallet. Firefight has also been ditched in favor of the free, episodic Spartan Ops.  Designed primarily with co-op in mind, Spartan Ops is comprised of campaign-style episodes divided into bize-sized chapters, each with their own objectives. While fun, there are currently very few Spartan Ops missions to choose from.  The overall quality of Spartan Ops has yet to be seen as its dependent upon the amount of support it receives from 343 Industries. If none of these modes sound appealing, one can always play custom games with friends, tweaking rules and maps to their liking via the comprehensive gamer editor and incredibly extensive Forge, which has been given a much needed user-friendly facelift.

The concept of loadouts has returned from Halo: Reach, however this time around, they are completely customizable as in most other shooters of today.  Players rank up by accumulating XP received from wins, kills, assists, and so forth. As they level up, they also receive points, which can in turn be spent on armor abilities, weapons, passive bonuses, and purely cosmetic armor permutations. Based on their performance, players are provided with ordinance drops during gameplay, from which the player is able to choose one of three randomly assigned helpful items such as special weapons, overshields, or damage multipliers.

Blast Factor:  Fear not, Halo purists. Although “loadouts” and “ordinance drops” will cause more than a few uninformed fanboys to accuse Halo 4 of turning the series into Call of Duty, it’s simply not the case. Halo 4 manages to evolve the series in a positive direction while remaining quintessentially Halo. 343 Industries set the bar above and beyond what anyone thought possible, making Halo 4 not just a contender for the best game of 2012, but quite possibly the best Halo title of all time.