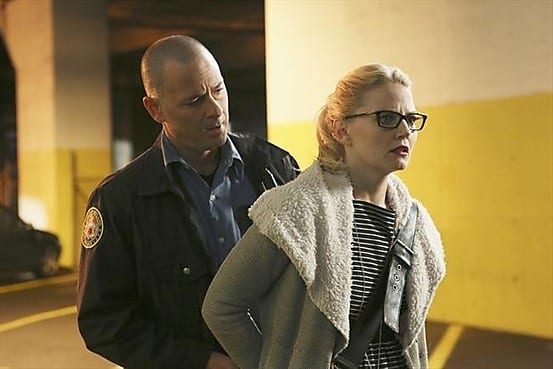 Emma (Jennifer Morrison) is betrayed while on the run.

Remember Emma? If your memory is a bit vague let me give you a refresher. Emma is the woman who came to Storybrooke a season and many creative ideas ago thanks to her precocious son Henry. Upon arrival, things began to change in the little town. Time started to move forward, memories began to resurface, albeit typically in a haze of self-doubt, and lovers began to seek each other out. She was so to speak, “the savior,” the “chosen one” if you will and all that jazz. She was a pinnacle character for the series who set many plotlines into motion and despite some sporadic writing and that awful red leather jacket, Jennifer Morrison did a good job carrying the majority of the story.

So why, you may ask, have audiences barely seen her thus far into season two? Beats me, although I’m assuming it’s the showrunners’ complete faith in the “let’s throw an idea out and whatever sticks wins” technique, what with the new characters and all. Tonight, however, she’s back—and happily so—in both real time and fairy tale world and in flashback mode. Maybe we’ll gain some new insights. Or at the very least, hopefully Emma and Hook share some definite chemistry since the two will be sharing a bunch of airtime.

There are two parts to this episode: the very good and the mildly cringeworthy.

The cringeworthy plot resides in the fairy tale world and I’ll be fair, mainly has to do with the CGI and apparent green screen set that Emma and Hook were walking around. I’ve seen video games with higher quality.

Hook and Emma have a mission for the episode, get to the top of the beanstalk, confront the giant, knock him out, grab the compass and run. Easy, right?

The duo begin their journey after Emma tells Mulan to cut down the beanstalk if she hasn’t returned in ten hours in order to keep Snow safe from the giant. As the two climb Hook tries to learn about Emma despite her hesitance in letting new people in. He tells her he can tell that she grew up alone and when she asks why he says he’s spent some time in Neverland and he says she shares the same look in her eyes as the lost boys, the boys who were abandoned or unloved. My excitement piqued at those words and then settled. The showrunners recent announcement that they weren’t planning on visiting Neverland this season was probably one of the most heartbreaking decisions they could’ve made. They obviously see no issue with juggling multiple storylines which span across multiple lands so how much harm is one more going to do?

However, their past showcases a failure at casting capable child actors so this may be a blessing to those who don’t wish to see characters like Peter Pan and the lost boys ruined.

They reach the top of the beanstalk and this is where the special effects begin to cause more harm than good. Distant wide shots have Jennifer Morrison and Colin O’Donoghue looking like they’re computerized rather than two actors on a green screen set. As Hook grabs a club to make noise in order to wake the giant, it looks like he’s grabbing air. Shows with sub-par CGI are fine though, look at all of Britain’s sci-fi genre series?

We knew from the very beginning that this episode would play to the kitschier side of the show. I mean, we all saw that Hurley from Lost was going to be playing the giant at the top of a horribly crafted, imaginary bean stalk. Still, viewers shouldn’t be cringing at the show. I shouldn’t feel the need to defend myself for watching it. I shouldn’t react to people catching me watch it by scrambling to the remote to quickly change the channel as if I were watching porn or god forbid, Glee. Yet Hurley the Giant, the CGI and the hilariously tacky green screen were all laughable, all cringeworthy, all easily placed in the second hand embarrassment category. If Doctor Who’s graphics are better than yours, and you’re on a network, it’s cause to pause and take note. Last season, the defense of the show was that they weren’t going out of their way trying to shoot an Emmy worthy show, rather they were simply attempting to create a fun one that was easily accessible, and it worked. So far in season two though it appears like they’ve just quit trying with the effects altogether, which is sad for this episode considering it’s the strongest of the season so far. Maybe it’s easier to believe that the shoddy special effects work is due to the amount of money that they show spends on the wardrobes, which almost makes up for it.

Emma and Hook and find the compass just as the giant awakes and begins to make a ruckus. In the middle of his temper tantrum he traps Hook under some rubble which leaves just him and Emma. However, Emma gets on his good side and plays to his emotions. He’s lonely and longing for company and he lets her go when she says she’s trying to find her son.

She gets Hook from under the pile of debris, but instead of having him come with her she instead chains him there to be let go after a couple hours so she can have a head start. He’s furious and asks her how she could mistrust him so much after all he’s done to help her? She says she can’t take the chance of being wrong about him and that he’ll be safe he just can’t travel with them. It was a great scene by O’Donoghue who played up the betrayal that Hook’s feeling. He’s a great addition to the cast and plays Hook with such a treacherous charm yet with a hint of heart, so that it’s easy to find him likeable.

Who else thinks that this decision is going to come back and haunt Emma later on? Yet as we learn with the flashback, there’s a reason for her to be distrustful of smooth-talking thieves.

Now, the very good part of the episode was the flashback. Although, it’s sad that the best portion of the episode of a show about fairytales is the part about one of the only two main characters that isn’t a fairytale character. It always surprises me that rather than trying to capitalize on their built-in fanbase and utilizing the source material for their classic characters the show runners instead make it up as they go on, mixing canon literature with ideas that fit their needs. Luckily for them, it worked this time.

It shows Emma before she was a rule-abiding citizen. She’s caught in the act of stealing a car by the man, Neal, who’s already stolen the car. They obviously instantly fall for one another. Nothing spells romance like the shared bond between two criminals.

The storyline that follows is the one about how Emma got to where she is today Morrison plays it wonderfully and it’s arguably her best showcase so far in the series. While her portrayal of an Emma who’s forlorn, bitter and bull headed can sometimes veer into the monotone, her Emma who’s yet to be completely stripped of faith in people is spunky, fun and highly enjoyable to watch. Morrison has a spark in her acting when she gets to portray Emma as youthful and in love and in regards to the robbery of a convenience store where she gets to pretend to be giving birth? Comedy. She’s very funny, and it was one of the few scenes where I laughed.

Although I have to find it humorous just how many men have fallen for Emma or have become potential love interests for her, she and Neal share an actual chemistry. (Who else at first believed it was going to be Rumpelstiltskin’s son Bae who’s yet to be found? Do I have to completely disregard that possibility now?)

Just as Emma and Neal are going to pull off a heist that will guarantee them a life of happiness and enough wealth to get them there, August returns to the scene to warn Neal off of the plan, saying that he’s getting in the way of Emma’s destiny. While it’s great to see Eion Bailey again as August, and I like that he envisions himself as a “guardian angel” of Emma’s, I want to know what was in that damn box that made Neal back off. What did August show him? Why didn’t August show Emma this mysterious box of secrets when he was trying to convince her of the magic of Storybrooke? Oh, plot holes.

Neal succumbs to the idea and the two set up Emma so that she ends up being arrested and thrown into jail for eleven months and while there, realizes that she’s pregnant. Neal makes August promise that if at any point the craziness surrounding her quiets that he’ll send him a note saying it’s clear.

This was an example of good character exploration rather than exposition that’s shoe-horned in. We have yet to learn this pivotal back story of Emma’s so why not do so while juxtaposing it with an Emma who no longer is trusting or naïve? Is this a Once Upon a Time that’s finally, FINALLY getting back on track?

I hope so, although the last scene almost did so much damage as to possibly tarnish my opinion of the episode as a whole. Henry wakes after a nightmare, the same nightmare that was mentioned before that Aurora was also having. His description of the nightmare and the link between him and Aurora has the possibility for some disastrous plotline so I’m hoping that it’s forgotten. We’ll have to wait and see.

For now the choice is to be cautiously optimistic. This was a very well done episode and next week appears to have a Red-heavy plotline which is always, always good in my book. Audiences—or maybe just me—need more Red on their screens.

Tentative optimism, that’s the plan. For now, viewers should just ignore the possibility of a Henry-heavy storyline and instead focus on how the writers finally managed to impress this season.