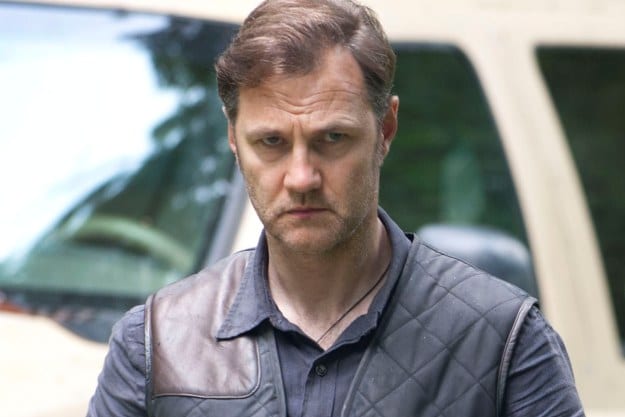 The entire episode this week took place outside of the prison we’ve been spending our time in with Rick and the regular gang and focused instead on Andrea and Michonne’s journey. A helicopter full of army men (why no military women, Walking Dead?) emerges in the distance and crashes in the woods. Andrea and Michonne, pet walkers in tow, see the smoke from the wreck and check it out.

When they get to it, Andrea promptly vomits because she’s still struggling with her sickness that we saw back in the pilot. It looks like there are no survivors, but Michonne doesn’t get the chance to check it out because a convoy of trucks rolls up to investigate. The women watch from the trees, horrified at the leader stabbing a soldier-turned walker in the skull. When Michonne’s pet walkers start to draw attention to them, she whips out her katana and beheads them without hesitation. I hope we’ll still get to find out about where they came from, but I respect Michonne for making tough decisions in an instant.

They still end up caught, however; a familiar voice comes from behind as the camera reveals Merle to be the one holding a gun to their heads. How surprising this was depends on how spoiled you were for this season; I knew beforehand, but I feel like the “previously” that explained Merle’s story from season one kind of gave it away. The hand he lost has been replaced with a knife contraption that’s—forgive me for this—rather handy for killing walkers.

Merle’s almost as shocked to see Andrea as she is to see him; she faints before they can talk, and she and Michonne are transported back to the crew’s camp blindfolded in the back of the truck. Andrea manages to see a walker body strung up in a tree outside the walls they pass through, and that should’ve been my first indication that this place was not going to be all that great.

The next thing we know, Andrea’s being patched up by a nurse inside a real house on a real bed with a real IV bag; this place, though creepy, is legit. Merle comes in to talk to them, flanked in the background by armed guards, and wants to know what’s been going on with Andrea and the group since Rick left him cuffed to that roof. Andrea rattles off a list of the dead from their group and gives a brief outline of where they’ve been. She tries to reassure him that Daryl would still be alive, but she hasn’t seen the group in 7 or 8 months.

Michonne doesn’t say much throughout this exchange; she mostly stands around looking suspicious. In fact, that’s how she spends ninety percent of this episode. It seems pretty in character from what we know about Michonne, but that doesn’t make Danai Gurira’s acting any less one note.

The leader of the group from before (David Morrissey) comes in and asks how they’re doing. Michonne demands to be given their weapons back, but he says they can only have them on their way out the gates. It’s not entirely clear to me whether this is just because they’re strangers or if no one besides the guards is allowed to have weapons inside the walls. In any case, he seems nice enough in that they can also take supplies with them when they leave.

Andrea and Michonne are still horrified that he stabbed corpses in the head, and he explains that it’s because they turned. When Michonne snaps that they hadn’t been bitten, he tells them the big secret: it doesn’t matter how you die, everyone turns in the end. The more I think about this particular plot twist, the more depressing it gets. Though it seems none of the characters have time for existential crises about it while trying to fend off walkers.

The Governor, as he tells them he’s nicknamed, gives them a tour of Woodbury, their walled up town. They’re guarded on all sides by walls and men with military grade weaponry to pick off walkers as they approach. Andrea thinks this is a lot of effort for a ghost town, but the Governor explains that there’s a whole community here; they’re just all in houses past curfew. I applaud Andrea for calling him out on his “nickname.” “Governor’s not a nickname, it’s a title,” she says. And from what we’ve seen, it looks self-elected. David Morrissey is great in this role, though; he pulls off the friendly host with just enough of the creepy vibe underneath that sets up the ending of this episode so beautifully.

The next day, a woman who works for the Governor gives Michonne and Andrea the tour of the place. The Governor’s strict rules and their walls keep them all safe, she explains, and they haven’t had a casualty in months. Andrea looks awestruck, and Michonne basically squints suspiciously at everything they pass.

The Governor and the nurse, meanwhile, question the pilot who survived the helicopter wreck. He tells them about his camp and how someone got bit somehow and the whole place quickly went to hell. He had a convoy off the highway, and he was out scouting with a small crew in the helicopter when they crashed. The Governor promises that if his men are still alive out there, they’ll bring them back safely.

On his way to meet up with a scientist in a mysterious-looking warehouse space, we see the exterior of the Governor’s house. It’s beautiful, and he literally has a yard guy. In the post-apocalypse, he has a gardener. Is that really what’s important right now, Governor?

Anyway, he meets with the scientist, who’s studying Michonne’s pet walkers (well, Woodbury residents call them biters. Is it a regional thing?). He’s learned that removing their ability to eat by taking off their arms and jaws removes their desire to eat and they become docile. They’re also camouflage; traveling with walkers makes others think you’re a walker too. It’s the less horrifying version of that time Rick and Glenn smeared themselves with fresh walker bits to get through a horde in Atlanta during season one.

The Governor and the scientist end up having breakfast with Andrea and Michonne to subtly interrogate them. Well, more subtly than Merle, at least. The Governor opens breakfast by talking about how much they must have thought about the different ways they could die while they were on the outside—yeah, that’s the conversation you want to have over eggs.

The scientist changes tack by asking whether Andrea and Michonne believe there’s anything left in walkers of the person they were before they turned. Andrea says she just tries not to think about it, and Michonne doesn’t react well to the scientist suggesting her pet walkers were people she knew. Which obviously makes me think they were people she knew. They were male walkers; maybe family members or a boyfriend? She doesn’t explain in this episode, not even when Andrea asks her outside in private.

Andrea asks the Governor what his secret is, and he says it’s “really big walls.” Really, though, he says it’s what’s inside them, people who get together and are trying to get back to the way things were before. They have schools and jobs and medical care in Woodbury, and the implication is that this civilization is thanks to the Governor and his code of rules.

Breakfast is cut short by the appearance of one of the guards, and Michonne tells Andrea outside that she doesn’t trust these people. Andrea asks if she’s ever trusted anyone, ever. The way Michonne says “Yes” is in a way that screams character back story, which I’m dying to hear about. Apparently, Andrea is too; she gets mad, saying that she hardly knows Michonne even after seven months braving the world together. Michonne doesn’t offer up any helpful character information, so Andrea suggests they stick around for a few days to relax and “get our shit together.” Michonne stops. “My shit has always been together,” she says. That one line and Danai Gurira’s perfect delivery is worth all the acting-by-squinting from the rest of the episode.

The final few scenes are what really make the episode for me. The Governor heads out to the highway where the pilot said his convoy was and waves a white flag of surrender. He tells them what happened to Lieutenant Wells (the pilot) and that he’s safe, and then promptly guns down the soldiers while they’re celebrating that their friend was alive. The slow motion here, while attempting to be epic, actually took away from the shock of the moment for me. It was almost silly in a way to see the soldiers dramatically fly through the air, and I thought the Governor’s (and his hidden team’s) ruthlessness was too sobering for that.

The men roll back into camp in their new Humvees with their new cache of weapons, food, and medicine courtesy of the men they just murdered. The people of Woodbury don’t know that part, though; they’re just accepting of the new supplies. It helps, of course, that the Governor gets up on the bed of a truck and delivers a crowd-pleasing lie of a speech about how the soldiers had fallen to the walkers before they arrived. The soldiers didn’t have these walls, he said, and they should honor their sacrifice by using the supplies they can’t use anymore. It’s clear he’s done this before, and that’s what keeps Woodbury running so smoothly. Logically speaking, his methods work out for him and his people, but from an ethical standpoint, this is all so wrong.

What makes it worse is that Andrea has bought into it hook, line, and sinker (or is at least acting like she does), offering to help in any way she can. She asks what his real name is, and he says he never tells anyone that. Not a good sign.

Everything gets even more twisted later that night. The woman who gave Andrea and Michonne the tour is asleep, naked, in his bed, but the Governor has other things on his mind. Taking his drink and his secret key from around his neck, he unlocks a secret door by the bookcase. There’s a picture of his family from before the virus, him, his wife, and a kid.

He sinks into his posh leather armchair in his secret room and stares off camera, deep in thought. The suspense was killing me here; less than a minute left in the episode and the camera was taking forever to pan over. When it finally did, I was horrified. The Governor was staring at his pyramid of walker heads kept in aquariums. At the top is the head of Lieutenant Wells; he must have killed him after he got the information he wanted.

All in all, this episode was less exciting than the first two of the season, though Woodbury and the Governor are one of the more fascinating turns the story has taken. Clearly, Rick and his group could be in danger if the Woodbury men happen upon them at the prison, though it’s not clear how far away the two locations are. Maybe it was someone from Woodbury was the one watching Carol from the trees last week. It seems like power and its effects on people is shaping up to be a big theme this season; I for one am interested to see how the two leaders on the show (Rick and the Governor) handle their power and what parallels there might be between them.