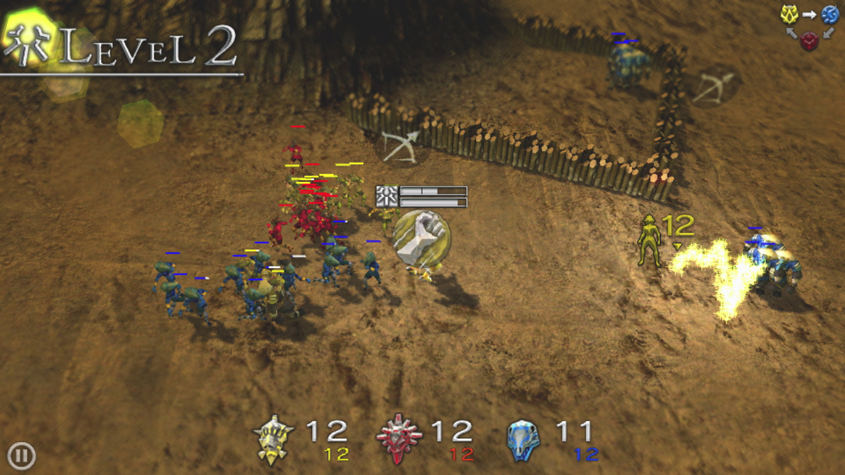 Remember when playing a rhythm game simply meant you were pressing buttons in sync with the music? These games are now more diverse and offer layers of gameplay that often blend different genres together to give us a more unique experience. Take Orgarhythm for example – a real-time strategy game that is also part rhythm game. While it may sound like a strange combination, Orgarythm manages to fuse both these components together to give players a finished product that is as innovative as it is fun to play.

Orgarhythm tells the story of a sibling rivalry between the god of light and the god of darkness, who are both vying for control over the planet’s surface. You control the god of light, who, instead of doing any actual fighting, marches through each on-rails level with a parade of followers. Your troops, as well as the enemies you’ll encounter, come in three different elements – fire, water, and earth – each with its own weaknesses and advantages, and like any RTS game, you can command them to do different types of attacks. The main difference here is that music plays a key role in how successful you are in battle.

Combat essentially becomes a rhythm game and you’ll need to tap your orders in tune with the music to increase your power. To initiate an order you need to perform a “tri-tap”: tapping the god of light, then the element of the soldiers you want to direct, and finally what type of attack you want them to do. Successfully tri-tapping increases your level, which, in turn, increases your number of followers and their overall strength and defense. As you can tell, battles aren’t that complicated, so the real trick lies in how successful you are at keeping the groove and your level maxed out and how well your troops fare against their enemies.

Once you complete a tri-tap, you then need to drag your finger over to where you want your followers to travel. Soon you’ll realize your followers aren’t very smart, and they will often run past enemies instead of homing in on them. Also, you can’t target enemies, so you’ll need to direct your followers to where you think an enemy will run to, andif you’re wrong, hope they’re smart enough to chase them down. This is especially noticeable when sending out archers to shoot enemies over barriers. Instead of taking out their bows in front of these structures, our followers would sometimes run into walls without doing anything. It’s frustrating when some controls are out of your hands especially when you’re relying on these followers to protect you. The busier levels, too, can sometimes make it difficult to discern where an enemy is as the game’s camera is static, preventing you from zooming in, so you need to keep an extra close eye on the battlefield to survive. If the god of light’s health bar reaches zero, you lose.

When things do go smoothly, battles quickly become enjoyable and require a bit of strategy and thinking. You don’t need to keep tapping the screen to the beat of the music, especially if you’re not attacking, but doing so increases your overall score for each level and simply becomes an addicting habit. As you increase your combo and defeat more enemies, the god of light’s ability bar also increases letting you deploy support-based commands such as defense and attack boosts, healing, and even a bolt of lightning onto enemies. Levels culminate in battles against giant bosses, which in conjunction with the game’s thumping soundtrack, soon become some of the highlights of the game. 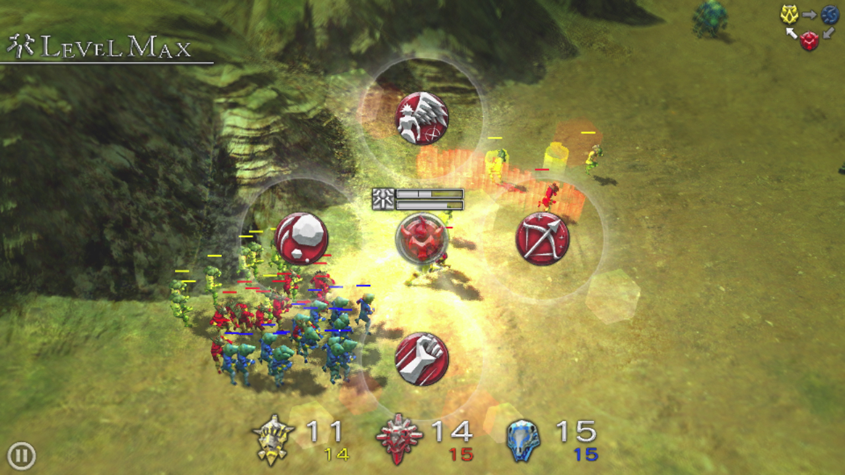 Playing through Orgarhythm’s twelve levels won’t take you long as each one lasts about ten minutes, so the real replay incentive is to achieve a perfect score on each level’s three difficulty settings, which isn’t an easy task. Their length also makes them perfect for quick pick-up-and-play sessions or when gaming on the go. There are also various boosts to equip before each battle that you can unlock the more you play, further changing the feel of each level. Additionally, the game features local multiplayer co-op and versus modes. We didn’t get a chance to test out these modes, but if the single player mode is any indication, playing against someone else should be twice as fun.

While it does have some AI problems and isn’t very long, like any rhythm game, Orgarhythm’s simple touch-based controls and catchy soundtrack manage to keep players satisfied even after they’ve finished the game. Levels are a blast to tap through but also reward you on how well you strategize your attacks. For what it’s worth, Orgarhythm is a successful blend of two genres and really showcases the best of both worlds.