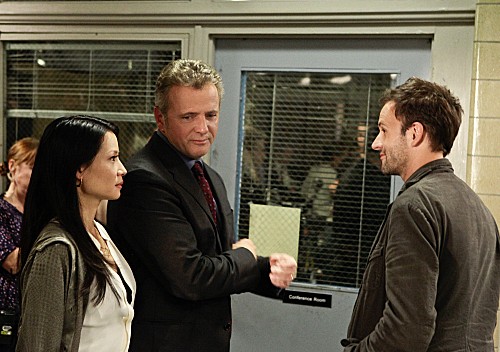 This week I was unfortunate enough to come across this article in The Guardian written by Victoria Coren. In this piece, Miss Victoria Coren spoke of how dismayed she was over Lucy Liu’s portrayal of Watson. Okay, that’s legitimate, you’re allowed to not like things sure. Well, Miss Coren, why don’t you like her? Is it due to poor acting, poor chemistry? No. Why? It’s because instead of it being Doctor John Watson, it’s Doctor Joan Watson. Yes! She is a woman, she is not bogged down by testosterone-fueled urges, and yes, sadly yes, this discussion continues to mindlessly press on. Just as it was originally, it’s still offensively doused with veiled sexism. I say veiled to be polite.

I addressed this a while back but this individual’s clear ignorance prompts me to repeat it. Watson being a woman does nothing, zero, to detract from the character. She’s sharp, on level ground with Sherlock, and is determined to do her best in the world. So, check off good writing, the show succeeds there. Lucy Liu is an incredibly watchable actress who shares a great rapport with Jonny Lee Miller’s Sherlock. It’s their acting capabilities that drew me to the show, not just the Holmes brand stamped on. So, cross good acting off the list, the show succeeds there too.

Lastly, to those of you who still believe that they only wrote Watson as a woman to devalue the duo’s friendship and ruin it with a “will they, won’t they” situation, showrunner Robert Doherty has assured viewers that is not the path they’re choosing to follow. To reassure those questioning naysayers a little more, the Robert Downey Jr. movies have ten times more the romantic subtext, the Steven Moffat version five times more the romantic subtext, than the current CBS incarnation, and I’ve yet to hear a complaint from a single fangirl of either of those versions. From what I’ve seen, they have often times been applauded.

I’m not fooled by those who trip over themselves trying to defend why they don’t like Lucy Liu’s version. As long as the characters are well written and are compatible and maybe even share characteristics from the Sir Arthur Conan Doyle novels (which they do), I will gladly watch and enjoy. They’re legitimate complaints to be argued about this show, and I’ve mentioned them before, but Watson’s gender and Watson’s race, are not them. If you’re one who still has a grievance, it may be time to reevaluate, and really dig into why you’re having the ludicrous complaints, because they seem pretty sexist to me.

Miss Coren, while I’m not sorry you’re missing out, you missed the best episode the show has done so far.

It’s a great thing to be able to watch a new show find its footing and truly develop the direction it wishes to take its actors and characters.

The episode’s title doesn’t lend itself to a very happy subject and to those rare individuals who read a review before watching the episode, be warned that this episode does in fact deal with child abduction and abuse. It’s a sensitive subject and often procedural shows will exploit the harrowing subject matter and use it to manipulate the audience’s emotions. Initially I was worried that this episode would do the same but I’m glad to report that they handled the content with the delicacy it deserves.

The episode jumps straight into the action with Sherlock pouring over missing children cases and trying to link them together and find a connection in order to discover the perpetrator of the crimes. Called in by Captain Gregson, they immediately go to the parents of the most recent victim, a missing little girl. Seeing they’re conducting a televised interview in order to reach out for help, Sherlock immediately puts a stop to it. He says that the immediacy of the murders in the past connected to the “Balloon Man” has often coincided with the amount of media attention. They gather information from the father about a suspect and seek her out for questioning. It’s from her that they develop their first lead; the suspect was driving a brown van and sped away from the scene of the crime. This leads them to the next development, a car with a large scrape along the side, from a brown van they deduce, speeding recklessly away.

Throughout the duration of those first few discoveries, Watson notes that Sherlock isn’t looking very well and realizes that he hasn’t being eating or sleeping. This, I might add, is a nod to classic Holmes. In Sir Arthur Conan Doyle’s stories Holmes would go days without food claiming that his metabolism working would only succeed in slowing his mind down. (I urge any avid reader who hasn’t already to read the collection of tales to do so.) Watson believes it’s linked to Holmes’ past addictions and his current recovery. Sherlock, changing the subject, mentions that Watson is a very good ear piece and says he appreciates her in a vague way. It’s mildly rude and condescending but it’s okay, because Doherty doesn’t allow it to be perceived as anything but.

Sherlock, Watson, Gregson and Detective Dell from last episode track down the brown van and the person who runs from it is not the suspect but the suspect’s very first victim, Adam, who is now nineteen years old and played by a versatile Johnny Simmons. Adam is brought in to the police station and interrogated in the hopes they’ll gather information about the whereabouts of the real suspect. The problem is he’s not speaking due to being in a state of shock. Sherlock believes that Adam has begun to sympathize with his kidnapper.

Sherlock asks Gregson if he could speak to Adam, despite his history of an inability to emphasize with delicate situations. Sherlock urges him saying he’d do everything to not jeopardize the little girl’s life.

Might I add how nice it is to see a Sherlock who works well with the police most of the time, rather than showing open disdain and contempt for them? He actually shows an appreciation for the people who allow him to work on the cases.

Once sitting across from Adam in the interrogation scene we’re treated to is arguably the best scene in the episode. Peter Blake, the man who penned the episode, makes sure to allow only a certain amount of honesty and depth to be displayed in the scene, while making it abundantly clear what Sherlock is talking about. Sherlock tells Adam that he understands what it’s like to have loathing towards an abuser turn to an odd affection; to have a weird affection for the individual who pays so much attention towards you, no matter if it’s negative. He tells Adam he won’t lie to him. We don’t know if what Sherlock is saying about a traumatizing childhood is fact or fiction but it seems to be leaning towards the truth, which allows a great new development in a character that viewers thought they knew so well.

From the questioning they have a clue about their suspect—he works night jobs. In one of the few lighthearted scenes Watson teaches him a trick about how to stay awake during a late night. I always appreciate a director who considers humor, and the way Watson and Sherlock bobbed in and out of frame while doing squats, grabbed more than a few laughs from me.

The next morning the case has developed and Sherlock and the police track down a house they believe the suspect to be in. Instead they find a bundle of balloons and a message. It’s a video saying that the suspect will give up the kidnapped girl if the police give him Adam. The little girl’s parents obviously urge the police to do it but they’re adamantly against it. This leads to Sherlock speaking to Adam again.

Adam tells him that he’s the only one who understands. Johnny Simmons is great here at playing a seemingly broken and confused young man, grappling with two loyalties. He’s especially powerful when asking Sherlock if the blood of his crimes will ever be washed completely from his hands and when reacting to Sherlock’s resounding no. Adam, because of Sherlock’s honesty, leads him to Samuel, the suspects, whereabouts.

However, once confronted, Samuel seemingly gives up and kills himself and lets the little girl free. Consequently, allowing Adam to not be persecuted for any crimes committed with Samuel.

Seeing Samuel’s body, Sherlock is confused, and says he expected someone less feeble, someone who would be more threatening and not wearing a back brace. On closer inspection of the house he realizes, to his dismay, that he’s been outwitted by Adam.

He confronts Adam alone and accuses him of the crimes, of being the true intellect behind the murders. He’s angry he’s been tricked, as it doesn’t happen very often.

Adam is confident. He turned the tables on his captor; he made it so others felt victimized so he had the upper hand. He used Samuel as vehicle to explore his fascination with power, and the way he gained it through seeing the faces of distraught parents on his TV screens, begging for their children to be returned to them.

The next day, as he takes his aggression out on the walls, he’s hit with a moment of clarity and enacts justice. All thanks to the back pain Watson’s squat technique induced.

He meets Adam in the park and talks to him about the one crime he committed without the aid of Samuel, as he had been bedridden with back complications. He proceeds to tell him that the police are on their way to incarcerate him and Adam leaves him with an ominous statement, saying he’ll get twelve months jail time at the most.

This was a very well-crafted episode. Black kept the suspense and pacing interesting, allowing the plot twists to actually surprise. Sherlock’s enforced dependence on himself rather than others is explored, as well is his scorn towards his father. And Miller is in top form, exploring a multitude of emotions and facades that his Holmes goes through this week. The music department deserves accolades and applause for the score that accompanied this week’s episode, a score that managed to elevate the written material. My only complaint is that Watson wasn’t utilized nearly enough for my taste.

This is what the growth of a show looks like. Embrace it, love it, curse the other shows you follow for not doing it and cross your fingers that Elementary continues in this fashion. If it does, audiences have a real treat to look forward to each week.