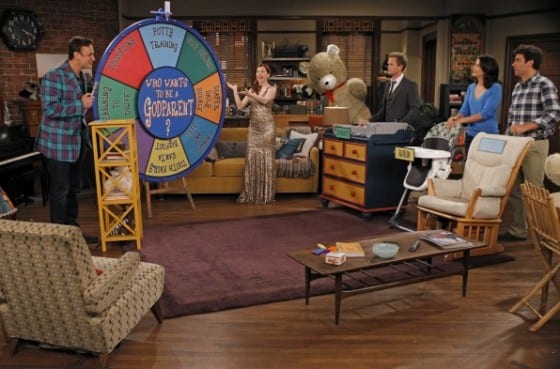 Lily and Marshall conduct a game show to determine who would be the best godparent.

In “Who Wants to Be a Godparent?” Marshall and Lily struggle to choose Marvin’s godparent, who would be responsible for taking care of him if they were to (cue Lily sniffle) die. The episode takes a break from the trials and tribulations of the others’ love lives in order to focus on the veteran couple’s newest challenge as parents—how to balance your time between your newborn and your best friends. The topic was a welcome respite from the show’s infatuation with Barney, Ted and Robin’s relationships and was a universal subject that both parents and those without kids could relate to.

Now that Lily and Marshall have found a part-time nanny in Lily’s father, the couple has time to return to MacLaren’s for some much needed catch-up time with their best buds. Future Ted reveals that he, Robin and Barney had promised Lily and Marshall after Marvin was born that they wouldn’t mention their problems unless they were an “eight or higher.” So when Lily asks the trio how they’re doing at MacLaren’s, they all simply say that they’re good.

Back at home, Lily and Marshall start to fill out a will.  They get to the part about choosing a godparent for Marvin, and after arguing about certain family members (Marshall’s brother, Lily’s mother) they realize that Ted and the others might be Marvin’s best hope. Each friend tries to woo them in their own way—Barney sings amusingly sexual nursery songs while Robin and Ted bring giant teddy bears. Marshall decides that the easiest way to decide between the three of them is to turn the competition into a fun game show-style event, dubbed “Who Wants to Be a Godparent?”  Barney, Robin and Ted all compete to be chosen as Marvin’s godparent, but they’re all equally offended when Marshall claims none of them are fit to take care of him. Eventually Lily and Marshall realize that they’ve been slacking off as friends, and head to MacLaren’s to make peace with the rest of the gang. When they make up with their friends, Ted mentions a snafu involving Victoria’s father and Robin complains about Nick’s eco-friendly motorbike.

“How I Met Your Mother” got back on track with “Who Wants to Be a Godparent?”  The comedy was excellent, catering to each character’s strong suit and resulting in a lot of laughs.  First of all, Marshall’s love of games is well-known to fans of the show (a round of Marshgammon, anybody?), so it was hilarious to watch him make a game out of his and Lily’s godparent predicament. Then, it was amusing to see how each character’s personality came through in their courting of Lily and Marshall and in their responses during “Who Wants to Be a Godparent?”  Barney of course reverted to a sexual theme, providing a new (and soon to be classic) rendition of “The Boobs on the Bus Go Up and Down” and explaining that his “birds and the bees” talk with Marvin would involve a trip to Amsterdam.  Ted’s answers mostly involved a sock puppet, highlighting his unimpeded corniness (and annoying-ness).  Finally, Robin’s methods reflected her dad’s tough-love style of parenting.  The episode-funniest award undoubtedly goes to Barney in this one, but the other characters certainly did their fair share to make “Who Wants to Be a Godparent?” a winner.

As eager as we all are to finally get to Ted meeting the mother, tonight’s episode was an appreciated departure from Ted, Barney and Robin’s storylines as a satisfying spotlight was put on Lily and Marshall.  New parents must’ve identified with the couple’s godparent dilemma, but the bigger picture was one that everyone could connect to. Most people have probably found themselves in Lily and Marshall’s situation, accidentally giving more of your time to something other than your friends—be it work, a significant other, your family, or something else.  So even though the dilemma in this episode of “HIMYM” was baby-related, it addressed a quandary that audiences of all ages could empathize with.

One of the questions that come with every hit show is whether or not it will be able to age well.  As the actors get older and the material has to change to accompany that inescapable truth, will the series be able to handle that transition well?   This predicament is usually most evident in teen dramas like “The OC,” in which a ticking clock continually counts down to the dreaded day that the main characters have to graduate and tackle life after high school.  That moment can often mean the demise of a show.  Though “How I Met Your Mother” began its run with the main players already out of college, it has still had to deal with this issue of maturity.  After seven seasons, it was only a matter of time until the topics of settling down, getting married, and having kids began to creep into more episodes.  But the series has handled the process exceptionally, and “Who Wants to Be a Godparent?” was a perfect example of how older characters with older troubles don’t have to mean the degradation of a once-beloved show.  That’s not to say that we’ll still be interested by the time Ted checks into a nursing home (and still has yet to meet the mother), but at this point a ninth and even tenth season don’t sound all that bad.

Like Ted mentions in “Who Wants to Be a Godparent?” some fans of “How I Met Your Mother” may miss the days when the gang closed MacLaren’s together. But just because our favorite characters have grown older and matured, that doesn’t mean the fun has to end.  This latest episode was a testament to the show’s longevity and how it continues to resonate with its fans eight years after it premiered.  And in addition to the moral behind the story, “Who Wants to Be a Godparent?” was downright funny.  Times are certainly changing for the “HIMYM” gang, but thankfully that doesn’t mean the brilliance of the show has to.