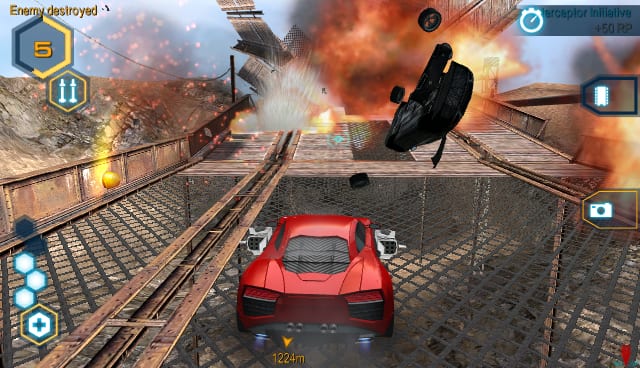 Much of the fun of playing a classic arcade game like Spy Hunter was getting a high score and flaunting it to anyone that tried beating it. It wasn’t lengthy either, so it was the perfect quarter-hungry game that was simple, uncomplicated, and still a blast to play. Times have changed, and while the latest Spy Hunter reboot puts you behind the wheel with nostalgia, it doesn’t quite give fans the game they were waiting for.

As always, players take on the role of a secret agent tasked with foiling the plans of a criminal mastermind using your Interceptor as both your method of transport and arsenal of high-tech weaponry. In fact, you have quite a few weapons at your disposal including rail guns, mines, and shockers that you can equip before each mission on the front, back, side, or roof of your car. These weapons do make you feel like a secret agent and give you several choices when dealing with enemies.

In fact, the game offers an extensive array of nifty gadgets that also take advantage of the Vita’s touchscreen. You can tap the screen at any time to send out a shock wave to repel enemies away from you or you can tap your scanner to download enemy intel or collect black boxes after vehicles are destroyed. Some missions even let you control an aerial bomber that lets you pan around from the sky and tap or slide your finger over any targets you want to annihilate. 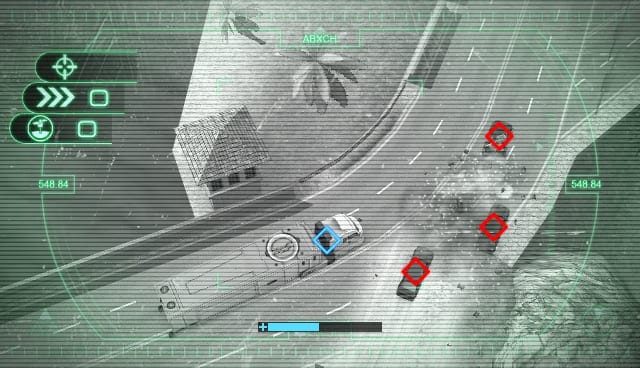 Most missions, however, don’t necessarily give you much variety as they mainly focus on defeating enemy vehicles or staying alive. You are confined to a car, after all, so there’s not much you can do except drive fast, attack, and occasionally tail an enemy. Granted, each mission you’ll encounter has different objectives and some do have storyline elements that make you feel like you’re doing something different, but again, they all come down to just taking out enemies.

Each mission does offer rewards for completing them effectively in the form of skill points you can use to power up your vehicle. You get points if you clear them with enough health, within a certain time, or if you manage to scan enough black boxes. Additionally, because each level offers alternate routes and branched paths, players do have an incentive to replay them again to collect skills points to fully upgrade their car. Unfortunately, scores aren’t posted to any online leaderboard, which is a bit bizarre considering the game’s arcade roots and the emphasis on high-scoring. Not only that, but the game can be easily cleared within a couple of hours, leaving you with nothing to do far too soon.

Visually, Spy Hunter does a decent job in its presentation. Graphics look crisp on the Vita’s screen, but most scenery and even your own car at times look flat and muddled. Your teammates also pop up on your screen with dialogue bubbles detailing your objectives, but the only voices you’ll hear belong to your car and the game’s raspy villain. The game also loves to enter cut-scene mode during critical moments, but because you’re still in control of the Interceptor during some of these scenes, they do more harm than good since you won’t always be able to see where you’re driving and might cost you some precious time. The music, while fitting the secret agent theme of the game, sounds repetitive after you’ve sat through the seventh remix of the Peter Gunn Theme.

Spy Hunter had a lot of potential to as a series reboot. The various new weapons, upgrade system, and the use of touchscreen controls definitely give it an upgrade, but the game falls short on how these additions are implemented into its repetitive format that only offers a few hours of entertainment. Those hours are fun, for sure, but it’s hard to recommend this game at its full $39.99 price tag considering how short it is. Spy Hunter is worth checking out, but wait a few months until you can find it in your store’s bargain bin.