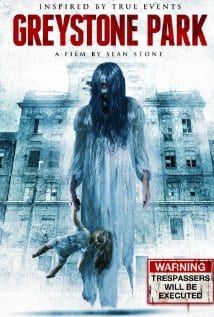 As it turns out, not really: the plot of “Greystone Park” , which will be released on DVD on October 16, is predictable, if unclear. Something goes wrong or someone gets possessed – I couldn’t really follow if there was an actual ghost or if the environment itself caused the victims to go insane.

In the end, though, that’s not too important. The strength of this film is in its mise en scene, editing and sound design.

“Greystone Park” is the feature directorial debut of Sean Stone, son of famed director Oliver Stone. I think Stone the Younger has done a smart thing: he’s chosen a genre completely unassociated with his father’s films, though it seems his father’s cache is needed to get “Greystone Park” off the ground. Oliver makes a cameo in the beginning, where, at a séance of sorts, he and others challenge Sean to visit a hospital rumored to be haunted.

Oliver is soon left behind, literally and figuratively, as Sean sets out to prove himself. Along with two friends, they sneak into the facility [Greystone Park] in the dead of night, armed only with a camera and a knife. One wonders why they didn’t bring more firepower. Whether the hospital is haunted or not, it could be occupied by squatters or gangs, and it seems quite incautious –even by horror film standards—to venture into this place without a gun.

But our intrepid explorers bring no such defense and stumble and jump at every turn once inside the hospital. For a time, it seems they are only scaring themselves, but soon real possession appears to take hold.

There are a number of films that come to mind when watching “Greystone Park”: “The Blair Witch Project”, “Session 9”, “Cloverfield”, and even “The Shining”. This movie does nothing new or inventive story-wise, but Stone does offer technical mastery. His direction, the cinematography, editing and sound design are all well done. This is a “medium is the message” movie, but if Stone wishes, he might be a strong experimental filmmaker in the mold of Stan Brakhage.

“Greystone Park” is a mind trip, with buzzes, pops, scratches, interruptions, and disorientation. These are all designed, I’m assuming, to keep the viewer unsettled, and to convey the feeling of losing one’s mind – all too appropriate as the ghosts of people who have suffered psychiatric experiments return to take revenge on the living.

While this is a straight-to-DVD product, that label might be unfair. This film may not be seen on thousands of screens in theaters, but that does not mean it shouldn’t have a robust audience. The marketing of the DVD is misleading. One expects a typical haunted house story –and in truth there is a lot of that—but what “Greystone Park” lacks in story it makes up in style, and it will be interesting to see where Sean Stone goes from here.