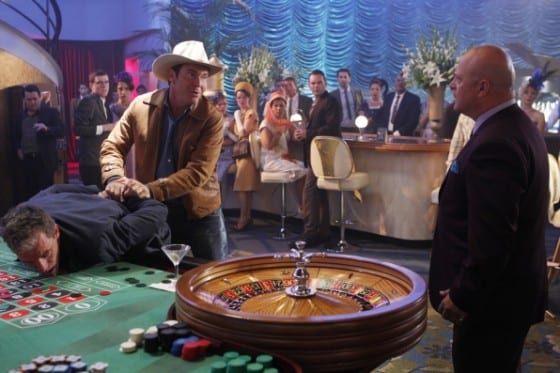 This week on “Vegas,” an Olympic gold-medal boxer winds up dead in the city streets and it’s up to Sheriff Lamb and his deputies to figure out who the killer is. While the cops try to crack the case, Vincent Savino welcomes a number of Chicago mob bosses to The Savoy. He hopes to eventually persuade them to fund the construction of an arena within the casino, which would make his casino the first one to do so on the strip.  As always, Ralph and Vinny’s paths cross, and when they do, it could mean the end of both Savino’s arena plans and Lamb’s life.

When the Chicago mobsters arrive in Sin City to visit Savino, one of them happens to be the father of The Savoy’s most recent employee, Mia Rizzo.  Her dad, Johnny Rizzo, carries a lot of sway with the bosses and Savino needs his help in persuading them to fund his big plans for The Savoy. Unfortunately for Vincent, Ralph Lamb knows that Rizzo is forbidden by law to gamble in the casino and threatens to throw him in jail if he sees it happening.  To circumvent the law, Savino puts Rizzo in his own private casino room that’s out of sight and out of mind.  But when Rizzo finds out that his dealer has been letting him win, he freaks out and winds up back out on the main floor of the casino.

As Vincent deals with Johnny Rizzo, Ralph is tasked with figuring out who killed visiting Olympic boxer Tommy Carol. The gold-medalist was seen bloody and delirious before collapsing in the street, where he then died.  Tommy’s teammate and best friend, Ray Humphries, claims that a pesky agent that’s been following the team around is the one responsible for the athlete’s death. The suspicious agent tells Lamb that Tommy sold him his gold medal because he needed money and that he saw needles falling out of his bag.  The needles lead Ralph to Tommy’s trainer, who explains that they were for medication to help him deal with a bad neck injury.

In the opening credits of “All That Glitters,” Tommy Carol and the other Olympic athletes fielded questions from reporters. At one point, Tommy gets fired up about a question concerning his defeat of the Russian’s boxer, spinning it into a rant about the way his African-American Olympian friend, Ray, has been treated because of the color of his skin.  While this civil-rights material was a step in the right direction for “Vegas,” the show didn’t go far enough with it.  What’s the point of bringing it up if you’re not going to actually do something with it?  So far, the show has made a point of emphasizing the 60’s backdrop through the dated cars, clothes, and mindsets. But it’s high time that “Vegas” did more than just show off old-timey cars and fedoras and instead used this specific moment in history to address what was happening not just in Las Vegas, but in the nation at this point in time. The hint at the Civil Rights movement was a good start, but now the history of the 1960s needs to be woven deeper into each episode’s storyline.

Inside Tommy’s locker, Ralph and his deputies find clues that lead them down a long and winding path, which eventually leads them to the discovery that Tommy was helping the abused wife of one of his teammates, Ronnie, run away. When Ronnie found out, he beat Tommy over the head with a pipe. But in the end, the coroner determines that Tommy died from a heart attack instead of blunt-force head trauma. Ralph figures out that the heart attack was the result of the boxer’s pain medication mixing with another medication, and that the medication was slipped to him by Ray Humphries. Humphries was only trying to make Tommy nauseous so that he couldn’t fight (and further injure his neck), but wound up mistakenly killing him.

When Johnny Rizzo finds his way back to the main floor of The Savoy casino, Ralph Lamb hears about it and arrests him. The mob quickly bails Rizzo out of jail, but now he’s pissed about being humiliated at the casino and wants Ralph dead. At a meeting with the Chicago bosses, he pleads for them to put a hit on the rancher-turned-cop, and Vincent must decide which is more important—getting his arena or preserving the appeal of Las Vegas.  In the end, he argues against killing Lamb, telling the bosses that if they were to whack him, he would be the 2nd dead sheriff in a brief amount of time.  If that were to happen, it would shake people’s faith in the city’s law enforcement and threaten the tourism industry in Vegas. The mob sides with Savino, but before they leave they tell him that he should forget about expanding The Savoy’s amenities.

The mob’s decision to spare Ralph Lamb proves that “Vegas” simply has no guts. This was a prime opportunity to build tension, create a multi-episode story arc, and make the show much more interesting.  Think of how much better the next episode would be if Lamb had to solve a case while also dodging mafia hit men!  But rather than take risks, “Vegas” took the easy road, giving Savino a lame excuse to leave him untouched.  Even if they did have to let him live, the least they could have done was rough the sheriff up a little bit.  Who knew that Chicago’s mobsters were such softies?  Ralph has been walking all over Savino and the mob from the start—at least they could give him a shiner or a broken arm to make him think twice the next time he had a chance to thwart one of their plans.

Besides “Vegas” having no real edge to it, it’s too often wincingly melodramatic and downright corny.  Much of the cheese comes from the overdone menace of Ralph Lamb, who’s frequently offering up horrible one-liners and dramatically lurking in the shadows. One moment that comes to mind is in “All That Glitters,” when the sheriff goes to arrest Ronnie, the Olympic athlete and abusive husband.  Dennis Quaid stands dramatically back-lit on the stairs, swinging a pair of handcuffs tauntingly in his hands.  And when Ronnie turns to run, the deputies step out of the shadows with rifles in hand.  It’s scenes like this that make “Vegas” a hard show to take seriously.  The series really seems to have an identity crisis here, as it constantly switches back and forth between a “gritty” crime drama and a lighter, hokey procedural.  That’s not to say that serious television can’t have some humor to it, but if you’re going to add a little comedy, make it brief and make it good.

Just like the past few installments, “All That Glitters” was an okay episode on a mediocre TV show. “Vegas” continues to take the easy routes and struggle with it’s identity.  Sometimes even the best television series take four or five episodes to really reach their stride and figure things out, so hopefully that’s the case for this one. But so much still has to change in order for “Vegas” to elevate itself from just another conventionally dull procedural drama that’s not worth an hour of your time.  Right now, there’s nothing going on that could give viewers an incentive to faithfully tune in every Tuesday night.  If “Vegas” doesn’t change things up soon, it could easily end up being one of this fall season’s one-and-done failures.