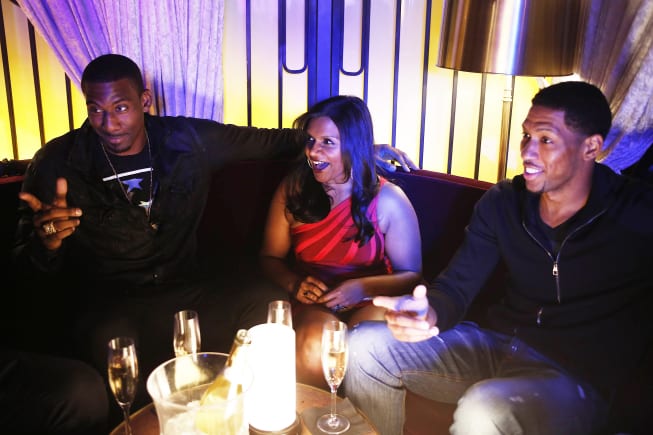 The Mindy Project is really starting to hit its stride now that we’re three episodes in. “In The Club” was a funny episode that showcased some of the minor characters while actually getting some early character growth for Mindy.

The episode starts not in the club, but at the office, where Mindy is chastising Danny and Jeremy for not answering her urgent emails this weekend but jumping at the mention of a sex tape in her email to them now. They each explain their respective weekends (Mindy pronounces Danny’s weekend “C-section sad” and Jeremy’s weekend sexcapades gross) and Mindy realizes she had the worst weekend of all. When Shauna comes in nursing a major hangover, Mindy gets the bright idea to have Shauna take her out clubbing. Shauna agrees in exchange for getting to move her desk away from the air vent.

Personally, I think this idea is almost as awkward as whatever accent Shauna’s supposed to be having. What boss asks their coworkers to take them clubbing? It seems weird, but once everyone in the office jumps on board “office club night” it’s a little less strange. Now they’re coworkers having a fun night out instead of a needy boss dragging herself along with a hip young employee. That the coworkers themselves (especially Morgan) are strange is just to be expected.

Mindy even invites her friend Gwen, who seems to exist just to be the put-together foil to Mindy’s chaotic personal life, to go clubbing with them but she declines. She’s too good for clubbing, is what her answer boils down to. But seriously, are we ever going to learn about Gwen in a meaningful way? I want to know about Mindy’s supposed best friend just as much as her coworkers.

In line for the club, Mindy is excited to hear that NBA players hang out here sometimes, and makes a comment about how much black guys love her. Her coworkers call her out as racist, which is a very good point, but Mindy being Mindy shrugs it off as simply the truth. Morgan has a duffel bag with him that we find out includes various fragrances, a Sudoku book (“for boring songs”), and an egg beater. There’s definitely something off about Morgan, but you know what? I enjoy him.

At first the night looks like it might be a bust; Jeremy’s up to his usual tricks eye-flirting with a bride-to-be across the room, Mindy tries and fails to strike up a conversation with a cute guy because of the music, and Betsey orders a $300 bottle of terrible, bright blue alcohol. Then Danny busts out his dance moves and all is right with the world because damn Chris Messina can dance.

Mindy catches Shauna gazing wistfully at the now-woman-covered Danny and calls her out on having a crush on him. Shauna so totally doesn’t, she says, but we all know that’s not true. I really, really hope they’re not going for a Mindy-Danny-Shauna love triangle down the road with this plotline. Danny has a lot of character work to do before I think he’d make a decent partner for anyone. The show seems determined to set him up with someone though, so I might be alone in that opinion.

Danny isn’t feeling it with Shauna though, and dances with her like an awkward 12 year-old before resuming his grinding with the other club women. Is he so dense he doesn’t notice her crush? Or does he know and not reciprocate? It’s hard to tell, it could be either. Jeremy has made his way into the bachelorette party across the club, and Morgan has decided to roll with people’s misperception of him as the men’s bathroom attendant. Hey, he gets tips.

Mindy ends up getting that coveted invite to the VIP area, where several NBA stars are hanging out. Betsey crashes her VIP party, completely wasted on whatever that drink she ordered was, but Mindy sets her in a corner with her phone as a distraction. Yeah, because drunk people and cell phones are always such a good combination.

Much to Mindy’s dismay, the guy who invited her to the VIP area is Josh (Tommy Dewey), not the NBA players. Josh is terrible at conversation, particularly the part where you subtly hit on someone you’re interested in, so as a sports attorney, he introduces Mindy to Amar’e Stoudemire, Danny Granger, and Baron Davis. Mindy is living her dream, and they all even discuss their favorite romantic comedies (Josh’s is Apollo 13, which is my favorite answer). I’d probably find this exchange funnier or more exciting if I knew anything about basketball, but it’s completely enjoyable even without that knowledge.

The guys invite Mindy to the after party, and she agrees, completely thrilled. First she has to save Betsey from a super creepy old guy (potentially a serial killer, we’ll never know) and drag her over to Shauna. Mindy actually notices that Shauna is having kind of a rough night, and tells her to forget about Danny. I completely agree. Mindy runs off just before Betsey pukes, which is superb timing on her part.

Mindy hesitates when it comes time to actually head to the after party though. She decides to turn down the offer despite Jamie Foxx being there in favor of staying with her work friends and finishing their office night out. She apologizes to Josh and heads back inside, and we’ve just seen our first real character growth from Mindy. She’s still self-centered, but it’s nice to see that in moments that count she can put her friends before herself.

Everyone’s glad Mindy’s back, and they head out to the dance floor amid confetti cannons after Morgan “settles” Betsey’s check with his bathroom attendant money. It’s really only $37, and that reveal after his triumphant moment is one of the funniest jokes of the episode for me.

Morgan steps in and saves Jeremy too, this time from the bad decision to sleep with that bride-to-be. I hope we get to see more Morgan and Jeremy time in the future, their interactions this episode were really enjoyable. Maybe now that we’ve been exposed to more of the characters we’ll get a chance to explore some of their friendships with each other and not just in relation to Mindy.

Their night ends on a high note, with a limo sent from Josh. He even bought Mindy’s pashmina back off of Amar’e, who kept it when she left it at the VIP table. Something tells me we might see Josh again. Everyone takes the limo home (minus Danny, who’s off with the girl he was kissing in the club) and chows down on pizza together. It’s a nice moment, and I hope the show will expand more in this direction. I want to see more interaction between the office characters; the actors play well off each other, and they all seem to have good comedic chemistry. Shifting the spotlight a bit away from Mindy every once in a while will be a good thing for the show.

Favorite Lines from “In The Club”

Mindy: “When I woke up, I spilled so much red wine on myself I thought I got shot.”

Betsey, to Dan: “You look handsome, like a youth minister.”