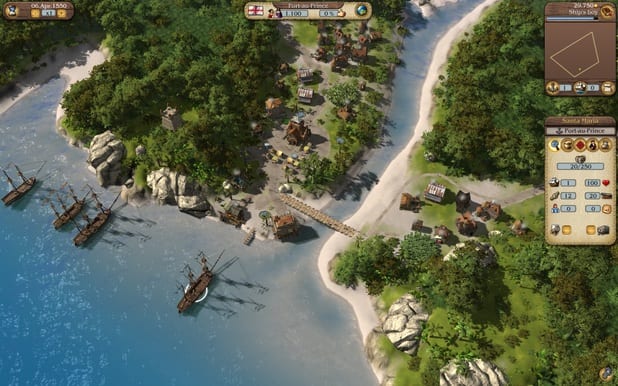 During the late 16th century, the seas were bustling with trade ships sailing to and from the various seaports dotted across the Caribbean. All this constant trading also resulted in the rise of piracy and historic naval battles that were often fought simply for spoils or goods. With such an epic backdrop, you’d think Port Royale 3: Pirates and Merchants would tell quite the tale, but what you end up with is ultimately a mundane and laborious spreadsheet.

Port Royale 3 is a trading game, meaning much of your time will be spent selling and buying goods and keeping track of your supply and income while also trying to increase your reputation and power across the colonies in the Caribbean. Like its PC counterpart, the game offers two campaign modes (sans an online multiplayer mode) that also double as extensive tutorials that show you the ins and outs of the game. You can choose to focus on being a trader or an adventurer, the latter of which focuses more on naval battles but still relies on sailing back and forth to different islands to rack up profits.

Trading with fellow colonies requires strategy, and while it may seem smart to buy large quantities and sell them for a higher profit, we soon found that this actually had us breaking even, stunting our growth. The trick to knowing where to buy and where to sell is understanding each colony’s specialty and what resource they severely lack. The overhead map indicates what they need, but you’ll need to memorize what town produces what to maximize the profits you get from buying cheap and selling high. This makes for a slow and tedious grinding process and a lot of time wasted on simply traveling from one place to the next.

Regardless of the campaign you choose, be prepared to look at the same overhead map of the Caribbean for a long time. Selecting a town enters town view mode, which gives you an up-close view of a colony and its buildings and also lets you select what ship you want to make your main trading vessel. There is no way to switch ships from the overhead map, mind you, and after you finish loading it up, you then need to exit this screen and return to the overhead map to select the location you want your ship to sail to. Once your ship reaches its destination, you can either enter the town view or simply open up that colony’s submenu to see what goods are available, what its specialty goods are, or to sell what you have onboard. Not only is the game’s interface cumbersome to sort through, but switching from the overhead map to each town requires you to sit through a brief loading screen.

Because the game heavily relies on trading, the only action you’ll mainly see is your ship’s movement across the map. Even naval battles, which you’d expect to be the most exciting thing about the game, feel more like dice-rolls than actual fighting. Success in pirate battles is dependent on how well-equipped your ships are for battle and how strong your defenses are. Once a battle begins, you can choose whether you want to participate in it or if you want the game to auto-resolve it for you, which adds your stats and the enemy’s together to randomly select the probability of victory, which will most often rule in your favor despite how badly equipped you may be.

Aside from trading and aimlessly defeating pirate ships, you will also encounter tasks that require you to track down pirate ships yourself. Not only do these missions often feel like wild goose chases as the directions you’re giving aren’t always accurate, but once you reach the alleged destination, chances are the ship has sailed away from it causing you to keep sailing around in circles. Your gold supply also decreases each day (since you do need to pay your crew and all) so sometimes these missions will be the opposite of a lucrative opportunity.

Visually, you’ll be staring at the same screen for most of your play session, but venturing into each location will reveal wonderfully rendered graphics and small details that set each colony apart from each other. The music that plays at each location, however, doesn’t match where you are, so you’ll sometimes hear upbeat guitars in the more jungle regions around South America when you’d expect to hear them in New Orleans, for example. The game’s tutorial is also narrated by someone that refers to ships as “ships” while the in-game text refers to them as vessels, making it quite confusing when trying to look through the game’s many submenus to check on your ship (or vessel’s) stats.

Port Royale 3 has a lot for you to do, but most of it will seem repetitive and more like micromanaging profit and loss than anything else. Aside from the two campaign modes, the game also offers a free play but this is essentially the same game minus objectives. It’s up to you to decide how much time you’re willing to devote to sailing around the ocean and trading goods for money, but just be aware most of your time will involve staring at a map.