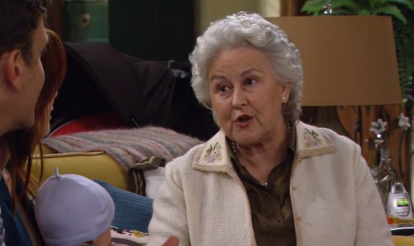 Mrs. Buckminster applies to be Lily and Marshall’s new nanny

Tonight’s episode, “Nannies,” was somewhere between the underwhelming, lack-luster season premiere and last week’s excellent outing, “The Pre-Nup”.   Lily and Marshall are plagued with the difficult task of finding a suitable nanny for little Marvin.  Meanwhile, Robin and Ted compete over who is in a more serious relationship and Barney copes with his recent breakup with Quinn by vigorously returning to his old playboy ways.  Ted and Robin’s rivalry was more annoying than amusing, but Lily and Marshall made up for it (as they always do) and Barney’s storyline had its moments as well. Overall, the comedy wasn’t as strong as it was last week, but on the plus size, “Nannies” brought us an episode closer to “a little ways down the road.”

With the end of his engagement to Quinn, Barney decides the best way to get back on his feet is to start “Bang-toberfest.”  He’s had $7,000 worth of merchandise made up in order to commemorate his return to single life and spread word to all available women that he’s back on the market.  Meanwhile, Marshall tells the gang that Lily’s dad, Mickey, randomly showed up on their doorstep after he burned his house down. Lily mentions needing to find a nanny, but when Robin suggests that Mickey could take care of Marvin, Lily quickly shoots the idea down. She explains that somebody who was never around for her childhood can’t be trusted to take care of her baby.  And since Ted and Robin are both in happy relationships (for now), they turn to sparring over who is the more serious couple.

Even though Barney’s swinger lifestyle has grown rather stale after about seven seasons of one-night-stands and alter egos, “Bang-toberfest” makes sense.  Since it is only a (hopefully short) matter of time before Barney and Robin get back together, the “Autumn of Breakups” can act as Barney’s last hurrah as a single guy.  Think of it as a “Hall of Fame” of sorts, in which he can use all his best lines and fake personas before officially throwing in the towel. Plus, kudos to the writers for finding a way to incorporate “Bang-toberfest” into Lily and Marshall’s troubles of finding a nanny.

Since Lily’s maternity leave is coming to an end, she and Marshall set out to find the perfect nanny for Marvin.  Unfortunately, reliable help is hard to find, as they interview comically under-qualified candidates. One qualified applicant named Mrs. Buckminster is just the grandmotherly figure they were looking for, but proves to be far too pricey. Finally, they find a girl who seems to be the right fit until Barney steps in and ruins everything.  After he tricks the potential nanny into sleeping with him, she refuses to work for people who would be friends with someone like Barney. Realizing that he’s screwed Lily and Marshall over, Barney makes up for his blunder by paying Mrs. Buckminster’s fee for them. But when Lily finally goes to hand Marvin over to her, she realizes that she’s not ready to leave him with a complete stranger.

So far, “How I Met Your Mother” is doing a decent job of creating humor from Lily and Marshall being new parents.  It didn’t take them long to work in a poop joke (Lily shirked diaper duty onto Marshall), but there are better jokes to come from their struggles. It’s hilarious watching Marshall so easily revert to being a kid again, especially when given access to fun new toys. He’s being immature, but at the same time you can’t help but feel like he’s going to be the perfect dad. As funny and enjoyable as the baby humor is, I hope that after a couple more episodes the writers can move past it and get back to some classic Marshall/Lily comedy.

When Lily turns Mrs. Buckminster away, it means that they’re out of nanny options.  But after Lily doses off, Mickey secretly slips Marvin from her arms and takes care of him all day while she sleeps. When Lily wakes up and finds out that her dad did okay with the baby, she realizes that she can trust Mickey after all. She asks him about never being around when she was a kid, and he shows her a photo album that he pulled out of his burning house.  The album shows that Mickey was there for Lily until her first day of pre-school, when his gambling addiction started. After hearing all of this, Lily decides that Mickey can be their nanny for the time being.

When Robin and Ted get talking about their relationships, they start trying to out-do one another over who is a more serious couple.  After complaining about their significant others’ flaws (Victoria is messy, Nick is emotional), Barney’s fragile state makes them realize that they’re just lucky to have someone.

Obviously not every episode of “How I Met Your Mother” has to have major plot developments that move the characters along to the next step.  Some of the show’s best episodes are bottle episodes, in which the strongest comedy happens but with little (or no) plot development occurring at all. But “Nannies” felt like a limp attempt compared to those classic episodes of seasons past. The sort of reconciliation between Lily and her dad was a nice touch, but otherwise the humor was only average and Ted and Robin even bordered on the annoying.  After three episodes of the new season of “How I Met Your Mother,” we’ve seen the bad, great, and middle-of-the-road episodes. Maybe next week, a steadier string of episodes will begin.