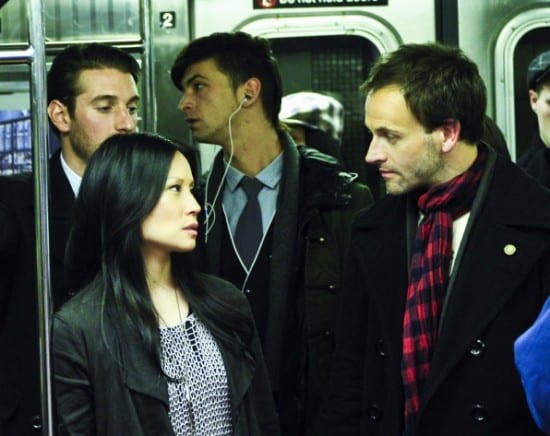 Sherlock (Jonny Lee Miller) and Watson (Lucy Liu) try and figure each other out in addition to solving crimes.

There is a magical thing that happens between the pilot and the second episode in a television series, where often times, while the tone of the show doesn’t change, there is a shift. The narrative stays the same but it becomes clearer. The pilot episode is the test run, the ‘let’s see how this works’ method. The second episode is clean up. They tie up the loose ends, get their pieces in order, and release an episode that may truly represent the show. With tonight’s installment of Elementary I think we’ve gotten a clearer look at where show runner Robert Doherty is pointing the direction of this show.

The episode begins with Joan and Sherlock in a mandatory AA meeting. As a man stands and shares his triumphs, Joan nudges Sherlock who appears troubled. In a funny gag, Sherlock quickly livens up, jumping to his feet once realizing the meeting is up, and walks out, informing Watson that he had in fact put himself into a trance. He’s not one for sob stories. The humor plays well and Jonny Lee Miller allows a childish sensibility to seep into his words as he tries to explain himself to Watson.

This first scene exemplifies how they’re doing right by the duo’s relationship, allowing it to be a slow burn rather than forcing the friendship. They just met recently, so they’re still working on trust. This is a naturalistic growth; they’re still learning each other’s quirks and ways. Doherty is building a stabilizing camaraderie, and isn’t that more interesting that having a fully developed one laid at our feet?

Sherlock gets a call from Gregson, beckoning him in as he needs his best consultant on the cast. Upon arrival at the scene of the crime, they find a body with a bullet between his eyes, and a new figure to the force, Detective Bell (played by John Michael Hill). The victim, Sherlock is informed, walked into the apartment and was shot point blank. As Sherlock begins to search for answers, Joan asks to be excused. Sherlock is confused by this, asking her how she isn’t able to cope being around dead bodies, after she was a surgeon for so many years. Watson is exasperated; Lucy Liu gives great annoyed face, and explains that the two aren’t even remotely the same. I’m glad this character trait was dealt with since I could already see the internet rumblings of complaints on the issue. The showrunners have done a good job in the past two weeks obliterating the basic complaints by naysayers.

Sherlock tells Gregson that there has been two crimes committed in the apartment. One, being the obvious murder, which he says was done by a woman because he can smell the deodorant she used all over the crime scene. The second, being theft, done by a male neighbor across the hall. At first Gregson and Dell say that this isn’t possible, but then Watson walks over with an incriminating photo, that shows where the missing furniture used to sit. The police arrest the neighbor, believing him to a suspect to the murder, much to the chagrin of Sherlock.

At the police station the neighbor is interrogated as Sherlock and Gregson watch on. Sherlock mutters about why no one is listening to him about the perpetrator being a woman. He is largely ignored. While I brought up the issue of the police’s intelligence last week, I don’t believe this is on the same level. Last week, the police missed such an obvious piece of evidence that it took a viewer out of the scene. This week it’s understandable. The neighbor stole the armoire as the man lay dead, and that doesn’t speak to an innocent conscience. The police used basic instinct to arrest him. Sherlock, on the other hand, has the notable ability at noticing what others can’t, in this case, the brand of deodorant used, but as he’s the only one who can tell it makes it rather difficult to sway the opinions of the officers.

Joan distracts Sherlock with a task to get some alone time with Gregson. She wants to know what Sherlock was like when the two worked together over in England. Gregson says he was irritating, but brilliant, and he says so with an affable affection for the man. Gregson was happy when Sherlock called him from London two weeks ago, he tells Watson. This confuses her because two weeks ago, Sherlock was supposed to be in rehab in New York.

Joan leaves to meet a friend and Sherlock asks when the last time was that she had slept with him. She tries to dismiss the issue but he powers on, giving her his approval, hoping it will improve her mood. At the actual dinner we learn that the man was a past lover, and still keeps his nose in most of her business. He tells her that her parents are worried about her. She used to be a surgeon, and now, in his words, she’s off babysitting drug addicts. He wants to know if she’s punishing herself. She stops that train of thought, she quit her job and now she’s simply going on with her life.

We cut to the next day with Watson and Holmes going about their business. The highlights of the episode are when we get a glimpse into the daily life of the duo. Watson makes coffee, Sherlock tries to get her to bring him some, Watson refuses, and repeat. Theirs is a give and take relationship, he antagonizes her, and she shuts him down, both strong personalities. They look at photos of the victim and notice a medical issue due to Joan’s useful knowledge.

She asks him why Gregson doesn’t know about rehab. He thinks it’s obvious, he wants to be hired, he thinks telling him will deter that possibility. Watson says it’s sad, having to lie to a man that seems like the closest thing Sherlock has to a friend. Sherlock brushes the comment off, but we can see that it hit the intended mark. Sherlock is a private individual, but more than that, it appears that rather than being protective of his job, he’s being protective of his pride.

There’s a lot that goes on with the case. They find the girl who resembles the girl who the neighbor saw running away from the scene of the crime. She’s in a coma and ruled out of the running. They instead realize that she has a twin and hunt her down as well. However, that is also a lost cause because despite Sherlock’s badgering, the woman is not letting anything up.

While stewing on the case, Watson finds Sherlock’s violin and urges him to play. He says no, saying that he forgot how to, claiming to have unlearned it. She doesn’t believe him and says that playing musical instruments can help relieve stress. He doesn’t think he’s stressed. She’s distracted by a call from her friend and walks away for a moment, allowing one of the silliest gags to take place. She’s in-focus with Sherlock in the background blurry and we see him rummaging about and pouring something on his violin. Just as we’ve caught up, he’s lit the instrument on fire. Watson notices and runs over, putting it out. Sherlock tells her that she was right, it did relieve his stress. Director John David Coles did an excellent job with the choreographing of the shot, allowing the humor to elevate with only a hint of what Sherlock’s doing.

Back on the case, there has been another murder. The two victims, they come to realize, were siblings. They discover a man who’s been involved with the two and who won’t at first cooperate until Sherlock’s drug addiction comes to use. He pulls the man aside and says he can tell he’s on methamphetamine, and that unless he gives up the information, Sherlock will go and find his stash in his drawers. The man cooperates, but not before Sherlock recommends him the rehab and AA meetings he’s going to. While sweet, it seems too saccharine for the version of the character we know. While a nicer, more emotionally attuned version of the character Sherlock could work, he shouldn’t be so sentimental.

The episode runs into problematic territory whenever the storyline strays from the bantering, playful, dynamically interesting pairing of Watson and Holmes. While the case this week isn’t nearly as absurd as the pilot episode and the outcome isn’t as predictable, it still causes the immediate lull in the progression. I understand that the show is more about the relationship than the crime, and it’s enjoyable and understandable. However, good and clever storylines shouldn’t be forsaken because of it. The show’s energy should play through all aspects of the episode, rather than the bits and pieces between the crimes being solved.

When Watson and Sherlock get back to his place they see that Watson’s friend is there after Sherlock had manipulated the situation to get him there. Watson is furious, telling him to stop invading her privacy. They have their first real fight, stating that they aren’t friends and don’t have to behave as such. Their secrets can remain their own and they just need to go about their basic day-to-day business and if in five weeks Sherlock is still sober they can go their separate ways. A great, flawed duo, both just desperately covering up insecurities.

They go to another AA meeting and during one of the member’s speeches Sherlock comes to a realization and rushes off to the hospital where the sisters await. They had learned that the murderer had wanted to kill anyone who had a possible connection to their father and their possible inheritance and now Sherlock realizes that there may have been more to the sisters’ lives. He stages a fight with Detective Dell and lies about there being another sibling in order to catch the suspect in the act and it works. It turns out that the sister in a coma had in fact been medically induced, and was having an affair with a Doctor who had done the medicating. Upon learning that there may be another link to the money, he wakes her.

The episode ends with Sherlock turning down a drink from Gregson and Dell, and sitting at home with take out and Watson. She tries to ask him about his addiction and whether denying himself simple pleasures such as playing the violin, is like some subconscious penance. All he responds with is, what’s the point of penance if it’s not acknowledged, essentially admitting to doing exactly what she accused him of. However, she’s doing the same thing. These are still two people living with their mistakes—their raw, harmful and destructive mistakes. They deny themselves bits of happiness because they’ve done wrong in the past. Ultimately though, they are honorable individuals, and prideful individuals. They feel the need to make up for the misdoings. These two aren’t perfect, and that’s what makes them and their growing—slowly growing—friendship so interesting.

The episode ends with Sherlock picking up the violin and beginning to play as Watson listens from up in her room. Is it a cliché? Sure, without a doubt. Is it effective regardless? Extremely.