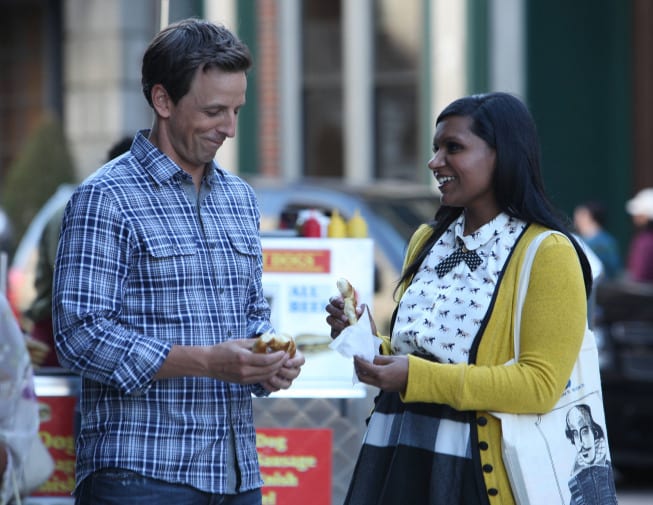 Well, the second episode of The Mindy Project wasn’t enough to sell me on it completely. It was nice to see more workplace interactions from Mindy and her coworkers, but the show still has that rushed quality to it that felt so off for me in the pilot. Maybe it’s just the rapid-fire, Gilmore Girls-esque dialogue, but I think the show just hasn’t found the right pace for itself yet.

This episode started with another Mindy voiceover—this time about observing different stages of love on the subway—that was quickly subverted when Danny cuts in to ask her to stop narrating. Apparently, she’s been monologuing out loud this entire time. I think this opening joke will get old fast, so I hope this is one of the last times they use it, but I enjoy seeing typical romantic comedy tropes turned on their head. In fact, that’s what I wish the show would do more of with Mindy’s character.

She meets her guest star beau of the week (Seth Meyers) in a bookstore, and they’re instantly flirty with each other about combining book purchases to get the free tote bag deal. They agree on joint custody of the bag, and he takes her out for frozen yogurt. After she hates several flavors, they settle on street vendor pretzels instead. He’s an architect, which Danny points out is “the kind of job guys have in the movies,” but we don’t get the chance to learn much else about his character. The rest of the episode turns out to be more of a workplace comedy than a romantic comedy. I think the show is trying to strike the right balance between the two, and while I like the workplace ensemble humor, I felt rushed out of Mindy’s romantic storyline this week.

The plot gets going when Mindy confronts one of the nurses, Beverly (Beth Grant), about some missing blood samples. Beverly is a little clueless and a lot cantankerous, which turns out to be pretty amusing. She flip-flops on her cover story for smoking pot in the office and when Mindy finds the missing (and mislabeled) blood samples in the conference room couch cushions, Big Boss Marc decides they need to fire her. He puts Jeremy on firing duty and Mindy fights for the right as one of the partners to hire the replacement nurse.

It turns out Danny, Mr. Macho (remember his “real man” discussion from the pilot?), has some insecurities about sharing power with Mindy as one of the partners. Shocker. Plus, he’s scared Mindy will hire someone exactly like herself, and that would be terrible, apparently. It feels like the show is pushing for an eventual trial period of togetherness for him and Mindy, and I would like to go on record now as not supporting it unless he changes a whole lot before then. This attitude combined with his 15 pounds comment from last week puts him at the top of my Please Don’t Be A Love Interest list.

Marc, however, seems to understand and maybe even share this concern about Mindy’s ability to hire a new nurse, and he tells Danny to “lend a helping hand” if she’s starting to do something that would be bad for the firm. Danny takes this to mean “please butt heads with Mindy every step of the way throughout this process,” and quickly vetoes a candidate Mindy had just been bonding with over Meg Ryan movies.

In the B plot, meanwhile, Jeremy is having serious trouble actually firing Beverly. He just can’t bring himself to do it, and he reveals to her over ice cream in the park that he has a lifelong inability to commit that stems from being sent to boarding school as a child. He’s getting at firing her in the most roundabout way possible (though I love that it sounds like a breakup scene) and she mistakes it for him flirting with her.

There’s a montage of various candidates who come in for a joint interview with Danny and Mindy, and they bicker in front of each and every one of them. Naturally, every time Danny likes a candidate, Mindy doesn’t, and vice versa. Finally, one woman blows up at them after witnessing one of their power squabbles and leaves in a huff. The two of them are being incredibly unprofessional, but the nurse’s comment about well-behaved child soldiers in Africa was an uncomfortable line for me.

I did like that Danny and Mindy bonded for a moment in their mutual dislike for the woman who pointed out their bad behavior; both characters seem very selfish so far, and both are the type to reject personal criticism. Maybe they’ll turn out to be workplace friends by the end of the season, who knows? For now, at least, they pretend to be for Marc’s sake when he calls them into his office.

The last nurse applicant of the day is a man who calls himself Ransom Tookers, but whose real name is Morgan (Ike Barinholtz). He’s twitchy and inappropriate and wearing a bright blue tracksuit. The tracksuit alone should have been enough to send him out the door, but Mindy and Danny only actually insist on him leaving when he reveals he was in prison. He went for carjacking with his cousin when they were younger, and as a reminder, Morgan has “No More Stealing Cars” tattooed in fancy script on his stomach. Even though he’s super sketchy, Morgan is odd in the best comedic potential way possible; if the show takes on the awkward humor The Office is known for (I swear, I’ll stop mentioning that show in every review), Morgan would be a goldmine for strange lines and stranger behaviors.

When Mindy finds out Jeremy chickened out of actually firing Beverly, she takes Beverly into her office to do it herself. She proves herself more than capable of dealing with the situation, doing what no one else had the guts (or respect for Beverly) to do. I don’t know if I can emphasize this enough, but especially after reviewing The Newsroom this summer, I adore that Mindy is portrayed as a woman who knows what she’s doing with her career. She has her job on lock.

Beverly takes the news like the mature, rational adult she is..and punches Mindy straight in the nose before running out of the office. Despite everyone being a medical professional in the office (well, with the exception of the two assistants I suppose), the one person to respond well to Mindy’s broken nose is Morgan, who’s thankfully still hanging around. Even though he’s a little creepy with his advice to Mindy about not having sex for a while after he pops her nose back into place, he still seems like he has the actual nursing part of his job down pat.

Mindy feels she’s earned the right to hire whoever she wants, so she picks Morgan. I appreciate that they didn’t shy away from pulling out the shock factor with Mindy’s broken nose—her face is covered in blood (and it looks fairly realistic, too). I think that willingness to “go there” is what might help set the show apart when all is said and done.

The episode ends with Danny and Mindy on the subway together once again. Mindy is feeling insecure about her looks with the nose cast on, remarking that “Unfortunately, we live in a society that puts a premium on white women with perfect noses. I’m 0 for 2.” This is one of the main concepts of the show that give it the potential to be great; Mindy knows she isn’t the typical rom-com lead, but she’s going to pursue her dream of true love anyway, and she’s going to do it like in the movies she knows and loves. And Mindy Kaling the writer has carved herself out this space in which to do this.

All in all, I feel the second episode was an improvement on the pilot. Obviously the show is still finding its footing in terms of tone and focus, but I think that potential for a great comedy is still there. I hope they start to live up to that potential sooner rather than later.

Favorite Lines from “Hiring and Firing”

Jeremy: “This is not a wetsuit, it’s skinny pants and a fitted shirt!”

Mindy: “What are your strengths?” Morgan: “Upper body.”