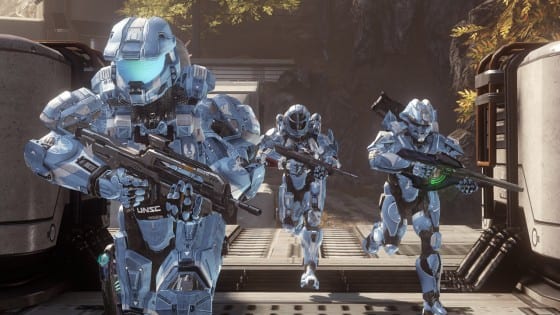 We had a big piece of news yesterday back in the office, which is that the game is literally finished at this point. They are handing it off through the various certification processes and that, and we’re done.

It’s been three years of incredibly hard work by about 300 people.

O’Connor’s announcement regarding the game’s gold status, which was later confirmed by a post on Microsoft Design Director and 343 Industries Sr. Mission Designer Tom French’s Facebook Page, was followed up with even more Spartan related news. In an interview with Eurogamer, O’Connor went on to indicate that Halo 4 would come on 2 separate discs, and unlike the previous games in the series, Halo 4 would run natively in 720p resolution.  He also went on to further admit that although the final build of the game may not look quite as pretty as some of the screenshots released by Microsoft, its beauty is comparable to some of the best looking games on the Xbox 360.

Although the majority of us will have to wait until November 6th to move forward unto dawn, some of the world’s most elite gamers will be getting their hands on it a bit earlier. Maintaining Halo’s long-standing association with the Major League Gaming community, MLG officials announced that Halo 4 will be featured in this year’s upcoming MLG Fall Championships in Dallas this November 3rd and 4th. Competitors will be given one day to cram in as much practice as possible before the competition, where they will duke it out for a chance to win up to $40,000 in prizes. If you’re interested in competing, or simply watching the 4v4 tournament, head to MajorLeagueGaming.com for Competitor Passes and a complete broadcast schedule.

Make sure to feast your greedy little eyes on most recent batch of Halo 4 visual goodness.