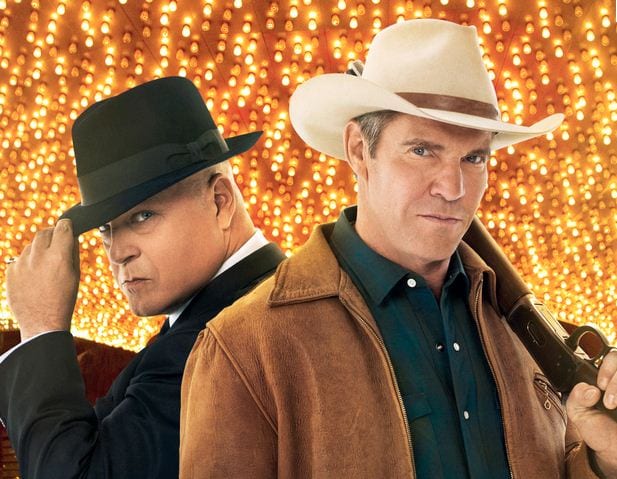 The last thing that television needs right now is another cut-and-dry crime procedural, where each episode provides characters with a new case to solve before those 60 minutes are up.  Shows like “CSI” and “Law and Order” focus so much on weekly whodunits that they often take years and multiple seasons to barely even get into the main characters’ backstories and their lives outside of work.  With that in mind, hopefully “Vegas” manages to dodge this repetitive formula and give audiences more character development, more plot twists, and more drama happening outside of each new criminal that the sheriff hunts down. The premiere of the show focused on a murder case, but there were positive signs that “Vegas” can and will be more than your run-of-the-mill crime solver.

The backdrop is Las Vegas in the early 1960s, right as Sin City is hitting its stride as a gambling Mecca full of expensive casinos, hotels, and lifestyles. All the glitter and gold brings Chicago crime boss Vincent Savino (Michael Chiklis) to town in the hopes that he can get a slice of the action and maybe even run of the town. But not everyone in Las Vegas is happy with the recent casino boom, especially rancher Ralph Lamb (Dennis Quaid), who is tired of planes flying over his land and spooking his cattle. All Lamb wants to do is herd his cows in peace, but that’s all about to change when the governor’s niece, Samantha Meade, turns up dead.

Unfortunately for Mayor Ted Bennett (Michael O’Neill), his sheriff is currently missing and he needs somebody he can trust to find out who killed Samantha. Bennett realizes that Ralph Lamb, who he served with in the army as a military police officer, is just the man for the job. Lamb’s hesitant to be a cop again, but eventually he agrees to take on the case in exchange for an end to the planes flying over his ranch.  What follows is your typical paint-by-numbers detective case, where Lamb snoops around Vegas and chases down leads in order to find the real killer. Along the way, he’s helped by his faithful, gun-toting brother Jack (“Terra Nova’s” Jason O’Mara) and his lady-killer son, Dixon (Taylor Handley). As expected, they follow the trail and eventually find the culprit to be Bob Perrin, an employee at the casino where Sam worked. And what a coincidence: that casino also happens to be under Vincent Savino’s control.

Michael Chiklis looks much more comfortable in the role of Vincent Savino than he does in comedies like the failed “No Ordinary Family.” The man is meant to play a badass, whether it be a good guy in “The Shield” or a crook in “Vegas.”  It’s obvious that Savino’s intensity will be limited due to the show being on a major network, but that doesn’t keep him from beating a guy senseless in the pilot. He poses a complicated issue for the mayor—his business is good for the city, but the whole mob boss thing is certainly a bit of problem. Little does Mayor Bennett know that the latter is only about to get worse, when Savino plays a hand in the missing sheriff’s permanent disappearance.  Though this guy is most definitely crooked, he’s still an intriguing character that’s fun to watch.

Carrie-Anne Moss drops in as assistant district attorney Katherine O’Connell, but ultimately she had little to do in the pilot. O’Connell is well-connected in the Las Vegas community and could be a valuable asset to Lamb as he tries to bring down the city’s riffraff. The premiere also hinted at some chemistry between Lamb and O’Connell, so we can expect that romance to blossom at some point down the road.

Though “Vegas” is at risk of becoming just another procedural (“Law and Order: 60’s Vegas”), there are signs that it could show some promise.  Setting the show in a dated Vegas rather than present day was a good move, one that’s benefitted other period-set shows like “Boardwalk Empire” and “Mad Men.”  Little was done with this feature in the pilot, but hopefully we can expect to see more time-period relevance in upcoming episodes.  Also helping “Vegas” is its considerable star power, with Dennis Quaid, Michael Chiklis, and Carrie-Anne Moss in featured roles.  It’s doubtful that any of those three actors will bring much of a fan base with them, but their presence means that audiences can look forward to respectable acting from film and TV veterans. Lastly, the creators of “Vegas” boast the credits of producing successful television (Greg Walker with “Smallville” and “Without a Trace”) and writing hit films (Nicholas Pileggi with “Goodfellas” and “Casino”), which speaks to the potential of this new show.

Still, the “Vegas” pilot wasn’t without its issues. First, audiences might have a hard time believing Dennis Quaid, who’s nearing 60 years old, as a tough guy and a force to be reckoned with. In the premiere, Quaid takes a punch and then single-handedly beats up three younger, stronger looking guys at the airport. If this kind of thing becomes a staple, it could become difficult to believe Quaid as a kick-ass sheriff.  Another possible obstacle for “Vegas” to overcome is simply the fact that it airs on CBS rather than on a channel like FX or even HBO.  It will be interesting to see how Pileggi adjusts to network television after writing plenty of graphic scenes in which characters bloodily get their heads bashed in or get riddled with bullets. The creators of “Vegas” are going to need to find a way to keep the show gritty while keeping it PG-13 for the network. And finally, perhaps the biggest hurdle for this show is to break the mold and not fall into the cookie-cutter format of every crime drama that has dominated CBS for the past ten years. If “Vegas” falls into the habit of using the murder-an-episode formula every week, no amount of cowboy hats, showgirls, or poker chips is going to save it from joining the ranks of all the other heavily-exhausted procedurals out there.

Overall, “Vegas” had a decent pilot that showed both promise and flaws. If anything, it’s worth watching the next few episodes to see how the show progresses as it gets into the swing of things. If “Vegas” can avoid the pitfalls of becoming just another version of the CBS network’s favorite type of show, than it could develop into something interesting. Otherwise, blending in with the others could spell an early demise for this show.