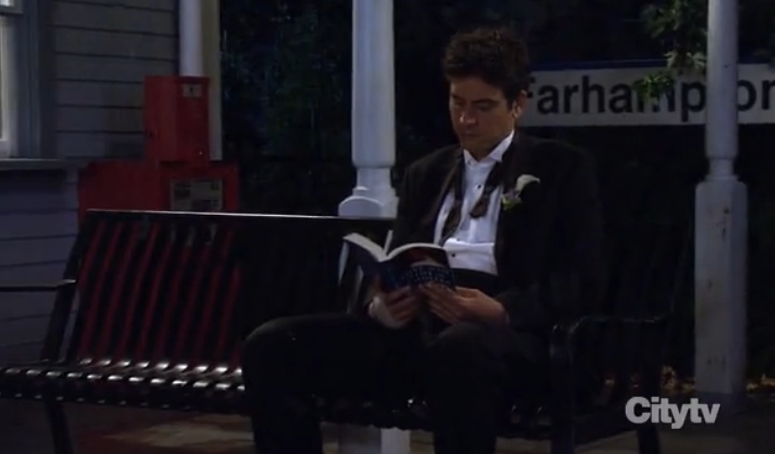 Ted waits at the Farhampton train station after leaving Barney and Robin’s wedding.

When the last season of “How I Met Your Mother” wrapped, we left Ted driving off with runaway bride Victoria, Lily finally giving birth to little Marvin Eriksen, Barney staging an elaborate marriage proposal for Quinn, and it was revealed that Barney’s future bride was none other than one Robin Scherbatsky.  “Farhampton” picks up right where last season left us, and things aren’t going so smoothly for the gang. Lily and Marshall are suffering from the lack of sleep that comes with being new parents, Ted and Victoria’s getaway drive is cut short, and Robin causes conflict in Barney and Quinn’s relationship.  Though “Farhampton” was as funny as episodes past, the doomed relationships that were the focus of this episode made it less enjoyable as a whole.

The title of the episode comes from the name of the train station that Ted is sitting at after coming from Barney and Robin’s wedding.  While he waits for the train, he tells a stranger about the difficulty of the wedding, where both bride and groom were having serious second thoughts.

Back in the present day, Ted and Victoria are driving away from her wedding, where she ran out on her husband-to-be, Klaus. But before they can get too far, Ted discovers that Victoria didn’t leave a note for Klaus, explaining why she’s left him at the altar.  Victoria doesn’t see why a note is so important, but Ted, thinking back to the note that Stella left him when she ditched him at their wedding, insists that they go back and leave a note.  Once they get back to the wedding, Ted goes through a comical series of trials in an attempt to deliver Victoria’s note for her.

It felt a little strange when Ted was perfectly content with helping Victoria do to poor Klaus what Stella did to him years ago.  The whole deal with the note in “Farhampton” seemed like an effort to make Ted seem at least a little guilty for helping Victoria commit the same act that devastated him in the past.  Still, his insisting that she leave a note wasn’t quite enough to rectify the situation. Plus, later on in the episode, Klaus’ mutual feeling of not wanting to go ahead with the wedding seems like an additional attempt to make Ted’s actions more palatable. But these Band-Aids don’t make up for the fact that Victoria’s return to the show could’ve been done in a better way.

Lily and Marshall didn’t get much screen time in the season premiere as their story was reduced to the simple factor that they are dead-tired from trials of being new parents.  They aren’t absorbing anything that the others are saying, they look exhausted, and they’re even mixing up their sentences (Marshall had the best line: “We’re not going to be one of those parents that have a zombie and become total babies!”). It was hysterical to watch Marshall and Lily struggle with the challenges of having a newborn baby, and there should be much more baby-themed comedy ahead in episodes to come. Here’s to hoping that they get more attention later on and don’t continue to get sidelined by the boring love life of Ted Mosby.

Barney and Quinn’s relationship is threatened with a rough patch when Robin finds out that Quinn doesn’t know she and Barney were together at one point. Barney claims that he’s insured that Quinn will never find out by destroying all evidence of him and Robin ever being together (explained with the help of a series of hilarious Photoshopped pictures).  However, an exhausted Lily accidentally lets the secret slip while Quinn is in the room. Quinn demands that Barney tell her the full story of him and Robin, and in an instant-classic moment, he effectively summarizes the entire tale, rapid-fire fashion, in less than a minute.  Not only is Quinn unimpressed, she storms off in a huff.

Robin insists that Quinn doesn’t have to worry about her and Barney still having feelings for one another, explaining that she has a new boyfriend named Nick. Quinn is reluctant to stop worrying, but when she sees how attractive Nick is (along with his washboard abs), she quickly dismisses her concerns. While Quinn heads to the bar, Robin admits to Barney that it hurt to hear about him destroying any evidence of them being together.  Barney gives her a key and an address to go to, and when she goes there she finds a storage unit containing a collection of keepsakes from their relationship that he didn’t get rid of.

The new season has just begun, and already the demise of Quinn and Barney’s engagement draws near. Judging by how emotional Robin was when she was sifting through that box of memories, it might not be too long until Robin cuts in and puts an end to the engagement. A quick death might be the best thing for it, really. Quinn has been an amusing squeeze for Barney and they’ve had their moments, but why delay the inevitable?  Robin has to get into her wedding dress and Barney into his tux eventually, so it would be better to get there sooner rather than later. Watching Quinn and Barney be happy together is like watching a joyous scene from Titanic before the ship hits the iceberg.  There’s no chance they’re going to steer clear.

Meanwhile, Ted successfully leaves Victoria’s note for Klaus but then accidentally leaves the car keys behind.  This scenario hardly makes sense—with Victoria waiting for him in the car, why would he have needed to bring the keys with him?  Regardless, on the way back into the wedding chapel Ted meets Klaus as he’s running away himself.  He tells Ted that he can’t go through with the wedding and that he left a note for Victoria (which Ted appreciates). Ted seizes the opportunity, swapping Klaus’ note with Victoria’s to make it seem like she ran off after reading his note.

Later on, Ted meets up with Klaus at the Farhampton train stop and asks him why he couldn’t go through with the wedding.  Klaus tells Ted that even though Victoria was wunderbar (he’s VERY German), she wasn’t The One.  He explains that some day, Ted will meet someone and know instantly that she is The One. The episode flashes forward to Ted sitting at the Farhampton station after Barney and Robin’s wedding, and of course a woman (whose face we never see) arrives at the station carrying her signature yellow umbrella.

Overall, “Farhampton” was a decent return to the “How I Met Your Mother” that we all know and love.  The comedy was as solid as it’s ever been, but the storylines are where the premiere – and the show in general – was really lacking.  The big question for the upcoming eighth season is: why should we care?  It’s already clear that Quinn and Barney aren’t going to work out, since in the future, he and Robin are on the verge of getting married.  Since this is the case, what’s the point in caring about whatever is going on between them in the present day?  Sure, at the beginning of “Farhampton” Robin revealed that she was as nervous about getting married as Barney was, as if to say “they may not end up getting married after all.” But at this point it seems likely that they will end up together, which means that Quinn is as good as gone and any time spent focusing on her relationship with Barney is time wasted.

The same goes for Ted and Victoria. Again, there’s a slim chance that Victoria ends up being the woman under that yellow umbrella at the train station. But judging by how lame it would be to have the big reveal (eight seasons in the making, mind you) turn out to be a character we’ve known all along, the mother isn’t likely to be her.  There’s no doubt on anybody’s mind that “How I Met Your Mother” is nearing its end, so why make us wait any longer?  Let this be a plea to the writers: reveal who the mother is, have Barney and Robin finally settle down (whether it’s with one another or other people), and give us at least one season in which everyone can be happily in love.  Other shows have proven that main characters can get together before the very end of the show and still make things interesting.  Hopefully “How I Met Your Mother” takes a cue from its predecessors and ties things up soon, because otherwise these empty relationships are going to end up dragging the show down.