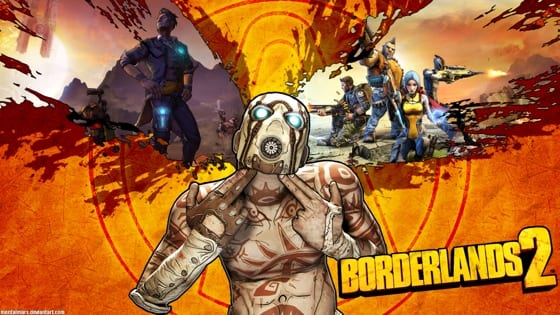 There’s an idea out there that less is more — that subtlety trumps extravagence. It’s an idea that apparently no one told Gearbox Software as their long awaited shooter, RPG hybrid Borderlands 2 is nothing but over the top, but that’s the point. Borderlands 2 delivers on everything fans of the original wanted, and gives them more of it. In the process though, Borderlands 2 carves out an identity all its own — as a sleek and stylish shooter that’s easily one of the best games of the year.

Borderlands 2 picks up almost directly after the events of the original — you play as one of four new vault hunters and through a series of plot twists and turns, you’ll be quested with stopping the Hyperion corporation, who has all but taken over the planet of Pandora since the events of the first game; and giving their douche of a boss Handsome Jack a messy and untimely end. In truth, it’s a story you’ve heard a million times before, but the key here is that it’s a coherent one, which puts it miles ahead of its predecessor.

The campaign of Borderlands 2 is filled with some impressively rewarding payoff moments, as well as a few that can even be viewed as touching and downright hilarious — thanks to incredible animation and remarkable voice work. As a fan of the first game, I’ll admit I got a bit emotional when I first heard Claptrap, but I was pleasantly surprised at just how good the voice acting was. I have to admit though, I’m partial to Handsome Jack — I mean, how many video game baddies can ask you to off yourself while complaining about how much the pretzels he’s eating suck.

But this is Borderlands, as well as it may be done you don’t care about the story or character development; you’re here for very simple reasons — lots of loot and lots of guns, and it’s here that Borderlands delivers in spades. Sure, the main story and all of its side quests will have you fetching and retrieving everything from weapons to the hair off beasts (no, really), but they’ll all end with you aiming down ironsights leaving someone full of lead.

Luckily, the game’s gun mechanics feel so fluid and precise that it literally never gets old. It also doesn’t hurt that there’s an almost ridiculous amount of guns to collect and experiment with/upgrade to your heart’s content. One of my favorite moments came when playing online with a colleague and just talking about the different guns we’ve come across.

Though the guns are great, it’s the loot that will keep you coming back to Pandora. There’s nothing like walking away from a heavy firefight victorious and going to town on dropped items and weapons. Even better is when you find those rare items that you weren’t expecting at all. The sheer amount of loot in Borderlands 2 (as it was in Borderlands) makes exploration a must, and incredibly enjoyable. Borderlands is always loads more fun when playing with someone else, and that’s never more evident than when you’re exploring and looting.

Perhaps the true genius of Borderlands 2 is how it comes so packed with content and choice but never once feels overwhelming. Literally everything in Borderlands 2 is either customizable or upgradable and there are plenty of ways to go about upgrading your character. the easiest way of course is by grinding through the game, but there are also challenges to take part in that reward your ability to do specific tasks like headshots with a specific gun our looting a certain type of chest. Admittedly, the visual upgrades aren’t all that impressive,. but you’ll get enough to differentiate your character from the others.

In all fairness, Borderlands 2 can be looked at as two very different games. Playing on your own is great, but it can drag and you’re really missing a lot of what the game has to offer when you’re playing with other vault hunters. It’s here that you’re actually able to experiment with different classes, see how they work together and allot points how you want to use them. The game also employs a system that adapts the difficulty based on the skill of your party, so no two play-throughs will be the same.

The Blast Factor:Sequels rarely deliver on the promise of their predecessors, but Borderlands 2 manages to top it in nearly every way. Rather than trying to redefine a working formula, Gearbox has just given fans more — more guns, more action, more loot — and that works very well. Borderlands 2 is not only one hell of a shooter — it’s also one of this year’s best games period.