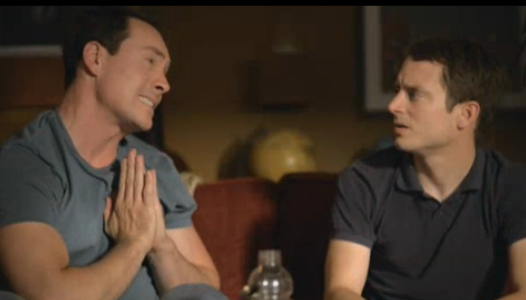 A week without Wilfred feels like a year, but it is coming back with a bang! Actually, it’s a wedding—Jenna’s and Drew’s. What could possibly go wrong? The proper question is, what can’t go wrong?

Ryan is outside watering the lawn and sees Drew pull up next door. Jenna greets him happily, which is absolutely noticed by Ryan, who tries to hide. Wilfred comes up and starts fighting with the water, blowing up Ryan’s spot. Jenna comes over and starts talking with Ryan. Every time Wilfred starts to refute Ryan’s excuses (babysitting his nephew and claiming to have mailed in the RSVP), Ryan sprays him with the hose. He tells her that he’s going to the wedding.

Wilfred is trying out his walks down the aisle while out walking with Ryan. He asks what Ryan’s problem is and Ryan spits out a bitter response. Wilfred calls him out on his jealousy and Ryan admits about being sad about not having Amanda. Wilfred suggests calling her (stop teasing us!) but Ryan brushes that idea aside. A dog runs over toward the end of a fence and Wilfred uses him as an example of anger and resentment and what it can do to someone/something. I wonder what the theme is this week…

Wilfred is talking to a group of dogs (including Jellybeans!) and Drew calls Ryan over. Jenna wants them to write their own vows and Drew wants help from Ryan. He’s looking for weed for “inspiration.” Cut to Ryan and Drew sitting in Ryan’s house while they both get high. Awesome! Wilfred is concerned about the vows and making sure they’re perfect. He suggests this insane fantasy of how Drew would show up (a hologram a la Tupac and riding on a panda with Eddie van Halen playing guitar in the background). Drew makes a comment about how it would be if Wilfred could talk. Ha, if he only knew.

He keeps tossing snacks at Wilfred, who catches every single one in his mouth. He leaves, annoyed that neither of them will help him with the vows. Drew confesses to Ryan that Jenna cheated on him. They had a huge fight, they stopped talking, and she cheated. He says that he doesn’t know how to describe how much he loves her when it comes to their vows. He even had a hard time figuring out what to inscribe on her ring. He tosses it to Ryan to show him. Drew gets Ryan to agree to walk Wilfred down the aisle. Ryan gets to keep Jenna’s ring, since he’s a ring bearer now. Not Ryan’s ideal situation. He has made it obvious he doesn’t want anything to do with the wedding, he just wants to be left alone.

Wilfred is annoyed that Ryan is now co-ring bearer and is coming up with alternate titles. Ryan is just overly upset about how happy Jenna and Drew are and how they’re still together—despite their issues—but he can’t even have a decent relationship. He doesn’t want to be a ring bearer, and tosses the ring toward Wilfred, who instinctively catches it…in his mouth…and then swallows. Totally didn’t see that coming (Seriously! No sarcasm this time.).

Wilfred is outside trying to poop and Ryan accuses him of purposely swallowing the ring to screw him over. Wilfred is still upset about Ryan saying that Jenna cheated, which is the same as saying Jenna would cheat on Wilfred—by petting another dog. He sees it first hand and gets all upset. In the basement, Wilfred is getting insanely high. He gets ill just thinking about the dogs that Jenna has petted. Ryan hopes that there might be a ring, but no luck. “That would be too easy.” Wilfred is also still refusing to poop for Ryan, causing Ryan to come to the decision to simply buy another ring.

Ryan leaves to talk to Drew and catches him and Jenna making out. He finds out that the ring was a family heirloom in Drew’s family, so that’s a no-go on buying another ring. Wilfred shows up screaming and horribly drunk. Jenna comes back in her wedding dress (gorgeous, by the way). Wilfred freaks out and Drew ends up being shot in the leg, and the blood gets onto Jenna’s dress.

Ryan is putting up posters of a missing dog with Wilfred’s picture on them. He has now become that dog behind the fence. Ryan walks up and asks what he’s doing there. Wilfred is so upset about being called a bad dog and Jenna petting other dogs. Ryan tries to talk some sense into him, telling him that holding in his poop isn’t hurting Jenna, just himself. They both say “Just let it go and get on with your life!” Just as the chained dog from earlier (apparently Wilfred was not alone behind the fence) is about to attack, Wilfred finally poops. He climbs out, picking up the ring on the way. Ryan asks where it is and Wilfred opens his mouth—it’s on his tongue.

Ryan brings Wilfred back home and he greets Jenna happily. Drew is on crutches and he needs surgery on their wedding day, so they’re settling for a civil ceremony at a courthouse (not to mention that Jenna’s dress needs to be cleaned, and all the other crap involved with weddings). Ryan says he won’t let them have the wedding at a courthouse—he’s going to throw them one. Jenna screams in happiness and laughter, as does Wilfred after Ryan tells him he can walk down the aisle too. Drew and Jenna thank him, then head inside the house. Ryan expresses the desire to have what they have and Wilfred tells him that it’s all up to him.

Ryan walks up to a door and knocks on it. Amanda opens it. YAY! They share a smile and cut to black. So excited right now. Jumping up and down in my seat. Doesn’t Allison Mack look fantastic? What does this mean for Ryan and Amanda in the future? Is Ryan going to confess all to her?

Ryan and Wilfred in the basement, discussing Drew’s vows that Wilfred has written. So far, so good…until Ryan recognizes them as lyrics to Sweet Child Of Mine by Guns N’ Roses. Wilfred tries to deny it, but Ryan points out that he wrote “guitar solo” in the vows. Wilfred decides to keep working on it.

In the final scene of the night, Ryan finds his t-shirt behind a cushion and questions why it was there. Wilfred says he wanted something that smelled like him to cuddle with because he was lonely. Ryan thinks that’s cute, until Wilfred admits to making love on it.

So, the most important part of this episode, is how skanky Jenna is for cheating on her guys.

Where will Ryan and Amanda go from here? Will Ryan open up to Amanda..completely? More importantly, what will that mean for Wilfred and Ryan? There is no way that those two aspects of Ryan’s life (Wilfred and Amanda, for simplicity purposes) can co-exist. Yes, they did for a while during this season, but that came to an end because Ryan couldn’t completely be himself with Amanda. Amanda is a scientific person. If Ryan tells her the truth, it will lead to her encouraging Ryan to seek professional help, perhaps even land him in an institution like his mother. This doesn’t necessarily mean the series would end, it would just bring a different dynamic. One that wouldn’t be nearly as successful as this current formula is. This show is nothing without Jason Gann in a fuzzy dog costume.

Speaking of the formula, it was pretty good tonight. Plenty of gross comedy (vomit and poop, oh my!) and dogs doing what dogs do. Wilfred’s over-the-top reaction to Jenna’s “cheating” almost seemed plausible, except for the crazy, sexualized moaning going on in his mind. Petting dogs is not that orgasmic. Trust me. However, the moaning montage in Wilfred’s head was most certainly the most entertaining scene of the night.

I did not anticipate Wilfred swallowing the ring. That was definitely one of those “Oh no. Oh no no no no no.” moments, and also probably something that should have been picked up on when Drew was tossing all those snacks at him.

It was wonderful seeing Chris Klein reprise his role as Drew. Personally, I’ve enjoyed watching Chris Klein playing such a character, which is different than what I’ve seen him in. High-Drew is much more funny than Regular-Drew. It was amusing that he turned to Ryan for weed and that they got high together. That was kind of like a bonding moment, right?

Next week’s episode is titled “Secrets.” Does this mean that Ryan will indeed come clean to Amanda? Maybe. We also don’t know if this is the season finale or a series finale. No renewal word yet from FX. They better get on that, and soon!