You feel that? The air is getting cooler, the leaves are starting to turn and most importantly — it’s the first week of the NFL season — or as Minnesota Vikings fans call it; oh no, not again. Yes, it’s that time of year again and here at Blast Towers — we couldn’t be more excited, so we turned to the closest thing we could get to real NFL football at 3AM — Madden NFL 13 (reviewed here of course) to simulate all of the first week.  So here’s how it works, we took the current rosters on Madden NFL 13 and let the game controlled both teams, so no — this has nothing to do with our NFL allegiances, because if it did, the Packers would be winning 145-3 and Guilfoil would force me to make sure The Steelers took off Peyton Manning’s head. We’ll update later to see how the game did. Let’s Football! 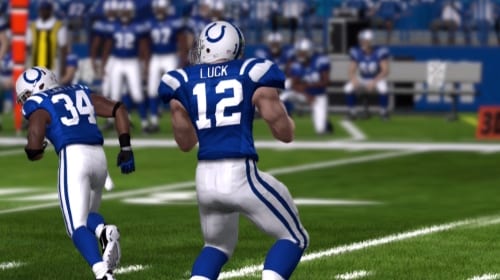 Perhaps no one has more to prove this NFL season than the first pick of this year’s NFL Draft — Andrew Luck; touted as “the most ready rookie quarterback in years,” Luck steps into a Colt’s team in transition, will that translate to success against a Bears team looking to make a statement. How will LB Brian Urlacher hold up?

In a close game that went to overtime, Chicago edged out The Colts, and ruined Andrew Luck’s debut by a FG, winning 13-10. Interestingly enough,  Chicago’s only touchdown came from a Devin Hester return, and the highly anticipated team-up of Brandon Marshall and Jay Cutler did little to help Da Bears.

The Eagles have been quiet this year, I guess they learned their lesson after calling themselves the Dream Team and then proceeding to blow every game. Perhaps the biggest question is whether or not quarterback Michael Vick can stay healthy.

Nope. In our sim, Vick went out with a broken leg in the first play of the second quarter when it was tied 7-7. No matter though, The Eagles still managed to defeat the Dog pound, 20-17. 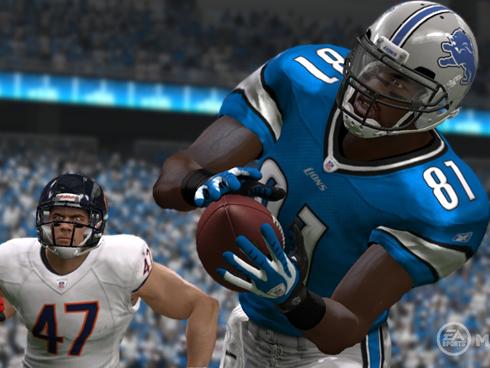 Last year the Lion’s were the surprise of the NFL season. Winning their first five games, the Lions are a dramatically improved team from the winless season a few years ago. Oh, and the team’s main receiver Calvin Johnson is on the cover — so there’s that. On the other side of the ball, Ram’s Quarterback Sam Bradford is looking to make a statement, will these be the start of his breakout year?

In another low scoring game, that saw only one touchdown pass on a Quarterback scramble by Bradford, the Lion’s got field goal happy, winning 12-9. Apparently this year team’s don’t like to score. Go figure.

The Texans are on a lot of people’s watch lists for this year, with an improved offense and a solid defense, the team is poised to make a lengthy run into the post season, as long as they can keep Foster healthy. The Dolphins are in a rebuilding year..and well, they’re the Dolphins.

In expected fashion, the Texans win this one easily 23-0.

This game is going to be….amazing…Oh, I’ll admit it, I feel asleep a bit. Alright, when the biggest story for both teams is a running back who holds out for the entire preseason..you know where this one is going to end up. Maybe Jarred Allen will have a new mullet to entertain us with.

Two years ago, experts had the Falcons picked as the favorite to win the NFC, but they never realized their potential — can they this year?

Well, if this game is any indication…maybe. Matt Cassel and the Chiefs came out to a surprising 24-point lead, but Matt Ryan led the Falcons back on the strength of a stellar fourth quarter, taking them within three, but the Chiefs were able to hold on 24-21. 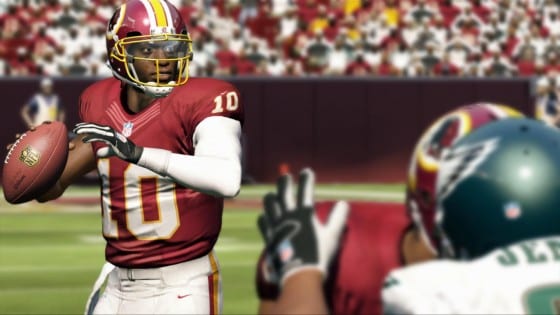 No game in week one of the NFL comes with more storylines than this ones.  The Saints are without their head coach Sean Payton in the wake of the bounty scandal and the Redskins are hoping that the introduction of Heisman winner and second all around pick Robert Griffin III can spark their offense. Can RGIII have a better NFL debut than Andrew Luck?

The Redskins came out to an early 14-0 lead on the back of two RGIII touchdown passes, but then the Saints came back to tie the game. Griffin had one more in them though, leading the Redskins to a 21-14 victory.

The bills were another surprise from last year, and the Jets, complete with the Tebow circus are the only team in the league if you ask ESPN. Can the big green machine put all of the hype behind them and get back to their winning ways or are we destined to see the end of Rex Ryan’s time in NY?

The Jets easily defeated the Bills 26-14

Tom Brady, good news — you don’t have to play the New York Giants this week.  Heck, they lost anyways. You do have to play a Titans team that could surprise a lot of people. They’re either going to be this year’s sleeper, or one of the worst team’s in the league. Yeah, they’re that team.

And it looks like it’s going to be the later as Tom Brady takes the Pats to a 20-7 victory.

All offseason it looked like Matt Flynn would be leading the Seahawks this year, but after a stellar pre-season, Seattle is going with rookie quarterback Russel Wilson to start. Will the rookie lead Seattle back to the top of the NFC, or will Flynn get his chance to win his job back?

Wilson threw for one touchdown and ran for another, leading his team to a 17-10 victory. Can Wilson become this year’s offensive Rookie of the Year? 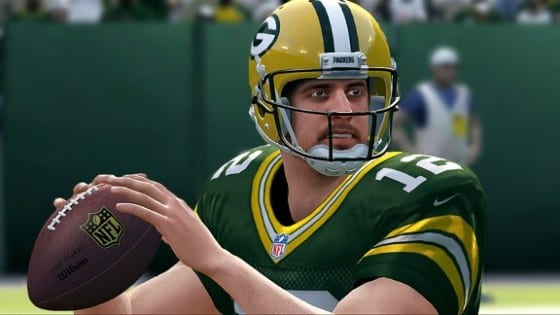 Last year, both teams were riding high as two of the premiere teams’s in the NFC, only to be bounced by the hot giants. Can reigning MVP Aaron Rodgers lead the Packers back to the Superbowl, or is it the year of 49ers?

In a hotly contested game, Rodgers through for three touchdowns and Cedric Benson ran in for one, leading the Pack to slightly edge out a tough San Francisco team 28-24. Look for both of these teams to go deep this season.

Last year’s Rookie of the year Cam Newton gave Panthers fans something to cheer about for the first time in a long time, now it’s time for him to prove that he isn’t a one hit wonder and make his team a threat in the league. On the other side, the Buccaneers were a surprise threat two years ago, but found themselves at the bottom of the league again last season. Can they right the ship?

Tampa was up with less than a minute to go, but Cam Newton heroically ran it in for a touchdown to send the game to overtime tied at 17, but on their first possession after regulation, the Buccaneers were able to score, winning 23-17.

This game marks the regular season debut of Peyton Manning for his new club — the Denver Broncos. You have to wonder though, will the game be a success if Manning doesn’t lose his neck?

It took Manning a while to find his rhythm, but the quarterback eventually found his way to the endzone in route to a 10-7 Bronco victory.

The Ravens were a play away from a trip to the Superbowl last year, and are on a lot of lists to win the AFC this year. Can they take that first step against a Bengals team that’s proven that they can be a threat to any team?

The Chargers are one of those teams that are always on people’s lists for team’s that could surprise you, can they return to their winning ways of the past against Raider Nation?

Nope. The Raiders actually crushed the Chargers 34-0. This is the upset of the week folks!

Who do you have this week? Let us know below!