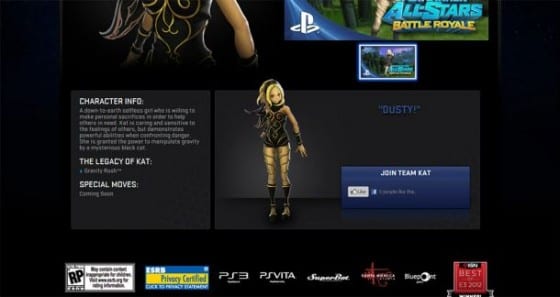 A new image posted on All Games Beta gives a lot of credibility to the rumor that Kat, the protagonist from the PlayStation Vita game Gravity Rush is playable in the upcoming Sony brawler PlayStation Allstars: Battle Royale.

The image above is reportedly from the game’s official site and reportedly shows the character’s bio along with her in-game character model. Could the image be photoshopped? Of course, but the rumor of Kat being playable has been around since earlier this year when a supposed image of her fighting in an Ape Escape stage hit the internet, and then another screen of the character in the LocoRoco stage.

Given the game’s track record of confirming leaks so0n after they hit, expect some sort of reveal this week.