It’s been a decade since the first Planetside game was released and a lot has changed in the gaming landscape. Back in 2003, World of Warcraft hadn’t released yet, the largest MMO was Everquest and people were still playing Counter Strike 1.6. Today, the MMO landscape has been reinvented by several types of games, social networking has taken over our lives, and people have two other Counter Strikes to pick from (but some still play 1.6. Some things must never change.) So, when looking at what Planetside 2 has to offer, it may not seem out of place in the present context. A massively multiplayer first person shooter with ongoing skill progression, faction building, and a unique online marketplace. Yet, what makes Planetside 2 stand out, lies in the numbers. 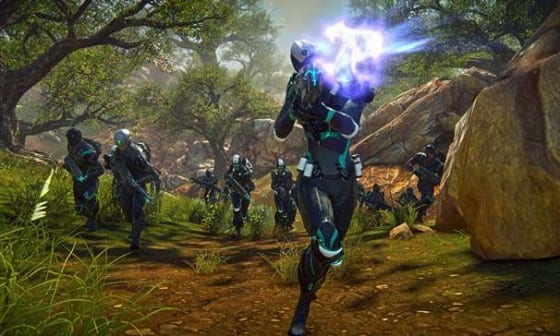 3: That’s how many factions are in the game. Online warfare has always been defined by white and black, good and bad, Counter Terrorist and Terrorist. When you add a third faction, things get interesting. Each of the factions in the game have unique goals and ideals, crafted to bring out the moral stances of each player. The Terran Republic are a conservative, totalitarian and unified nation. They see full government control over the populace as the only way to maintain order and peace. The New Conglomerate are a sect of freedom fighters, dedicated to provide liberty to all who are oppressed, standing up for the rights of the individual. Finally, the Vanu Sovereignty are a group of intellectuals allied with the vision of utilizing alien technology to further human consciousness. They are past the illusion of government; they follow faith in higher knowledge. The three different factions have clear aesthetical differences, and each benefits from slight changes in their weapon and vehicle functions. If you thought a battle where you only have to worry about one enemy was bad, imagine one where three groups of people are trying to gain control. It gets beautifully ugly. 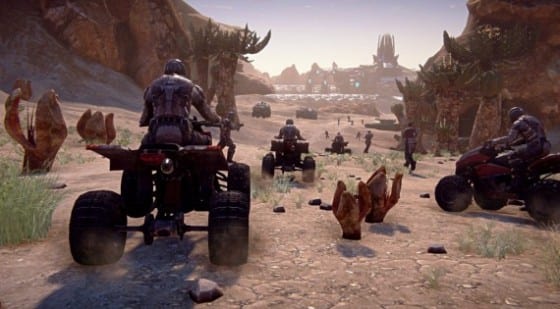 2,000: That is how many players are supported in each server…at once. This is no joke. While my time spent in the beta never reached that level, I was active in a 1,500 player server and (to the anger of my computer) I took part in a 200 player battle for one of the central control points. With the game a couple of months form release, it is not out of the question that Sony Online Entertainment can launch the game with their goal met. Each continent is massive, meaning you will rarely see more than a couple of dozens of players in each encounter. However, the constant battle of attrition makes it clear that a well-organized faction can remain dominant over a server if done right. 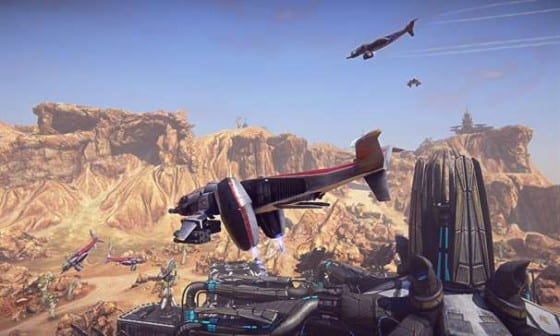 0: This is how much the game costs. Once it releases this holiday season, there will be no initial cost for players. Just download and start playing. Much like many successful MMO’s and online shooters in years prior, Planetside 2 will maintain its economy with in game purchases. However, everything that can be bought with real cash can also be earned with in game currency. Looking at the store in the beta, the amounts do not seem ridiculous, and there is nothing there that a couple of hours of hard in game work will not earn you.

Despite all of these figures, the game cannot be properly described unless you play it. Much like those epic childhood battles in your imagination, a lot of the standout moments are in the little things: While I was playing as part of the New Conglomerate I spawned in the massive main base at the edge of the map. As I picked my class I received a message from a fellow soldier telling me that he had a Galaxy (a twelve person drop-ship) stationed outside of the vehicle spawn and he was going to fly deep into Vanu Territory in order to capture a crucial control point. The ship was leaving in 5 minutes, all were welcome to come. I hopped on the ship which quickly filled up and we were on our way. 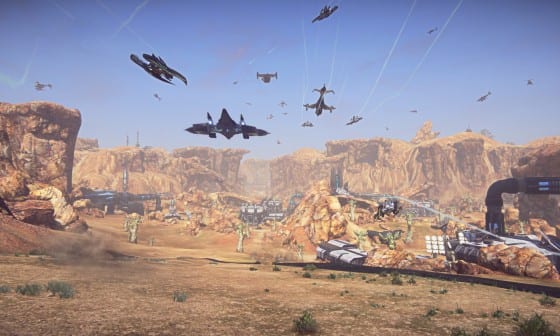 As I sat in the gunner seat I saw two fighter ships join in the squad chat and alert us that they were providing cover. Flying over the massive landscape I saw several battles going on underneath us, each containing dozens of players. The moment we crossed the frontline into enemy territory, we were assaulted by anti-air flak. The fighter planes broke formation and engaged other enemy ships in aerial dogfights, the bomber we brought along did strafing runs to destroy the AA guns tearing us apart, and I as a gunner began opening fire on anything that seemed hostile. Our pilot announced our landing spot as he got closer and begged players for backup. The moment the ship touched down, twelve players rushed outside and began to partake in small arms fire. The Galaxy engaged its shields so that snipers could take cover while engineers began repairing the smoking cruiser. I followed my teammates into the thick of the battle, seeing my shields drop but quickly come back as a medic began administering help. I was an anti-vehicle specialist, so I began scouting for enemy tanks or other nuisances that would be weak to my rocket launcher. As the battle raged on into the night (thanks to the persistent day-night cycle), I spotted a friendly Galaxy fly overhead. I pressed Q to bring up a communications scroll-wheel, letting me alert them to the desperate need of backup in the ground. The pilot heard my call and made an emergency landing, bringing more soldiers to our aide. The territory was hours in about half an hour. After taking over it I logged out for the day. The next morning, the territory had switched sides once again, this time going to the Terran Republic. All three factions were engaged in a firefight. 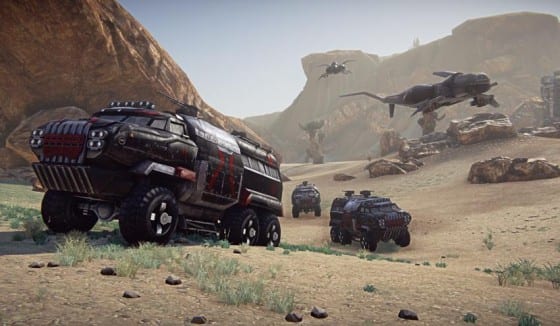 Imagine when you were a kid. In those hot summer days when your parents forced you to go outside instead of playing video games or those bitter cold winter nights when you and your friends would stay inside and have basement sleepovers. Chances are at some point you imagined being intergalactic warriors in battles full of thousands of soldiers. Maybe after watching Star Wars, or Starship Troopers, your imagination took you to these massive battles where you and your friends would fight for every inch. Planetside 2 lets you play out these battles. It may be much to say, but Planetside 2 lets you relive your childhood. It is just that good.