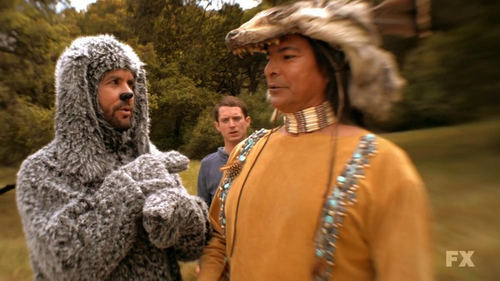 Listen, I got this.

Tonight, Wilfred and Ryan take the trip of a lifetime. Or what you can fit into half an hour.

Kristen and Ryan are talking about boy names but he’s too uncomfortable about her nursing around him to really care. The baby’s name is apparently, Joffrey. I hope he doesn’t cut off any heads, or just turn into a huge twat once he’s given the Iron Throne of Westeros (Game of Thrones references! YAY!) She tells Ryan that the baby needs a male influence in his life and then hands the baby over to get something to drink. Ryan starts to have some freaky panic attack after holding the baby for a while. He runs into the basement and his panic causes Wilfred to panic. Wilfred’s stress level is causing him to shed, which is directly caused by Ryan’s panic. He wants to find the reason for Ryan’s panic level.

At the pot shop, the clerk suggests a certain kind of whatever and the boys seem pretty interested in it (begins with an ‘a’ ends in ‘huanacaca’ or something funky like that). He offers to sell them some and Ryan buys. He warns them about following their trip completely, which causes Ryan to change his mind, but there are no refunds. Oh well. This is going to be a fun experience.

Kristen calls Ryan asking for Joffrey’s pacifier (by the way, always have a back-up pacifier…and a back-up for the back-up and a back-up for the back-up…all right all right, you get it). He starts to panic when he hears the baby crying, again. Wilfred starts to panic and ends up ripping a piece off Bear (Oh Bear! So much abuse has been heaped on you courtesy of Wilfred). Ryan, who is hesitant of using the weed he had bought earlier, finds out that he has been drinking it the whole time.

Ryan starts to worry and pace about being dosed with a hallucinogenic. Wilfred talks to him to try to calm him down. Then the trip starts.

The boys are in some kind of field/forest place. Wilfred is beyond excited about this. Ryan, of course, has to rain on the parade by claiming that none of it is real. Wilfred brushes him off and encourages him to enjoy himself. Ryan meets Red Wolf, his spirit guide. Wilfred interrupts and tries to get rid of Red Wolf. They bicker until Ryan breaks it up and tells Red Wolf that he’ll go with him. Ryan asks Wilfred who he is, and Red Wolf asks if that’s his question. Ryan decides that yes, that is his question. He makes Wilfred stay where he is and goes off with his spirit guide.

Red Wolf and Ryan are in some kind of mountainy, hilly, field thing and it turns out Ryan’s mind is forming things from a movie. His phone ringing interrupts—it’s Jenna calling. Wilfred (the not trip one, you know) shushes him and Ryan ignores the call.

Back on the trip, Ryan’s mind is shaping his trip. Jenna and Kristen are having some creepy make out session. Red Wolf moves them onto some truth water where Ryan asks his question: “What is Wilfred?” Just as something starts happening, Red Wolf goes down with an arrow into his throat, courtesy of Wilfred. Ryan confronts his best friend, pointing out that he won’t get the answer without Red Wolf. Wilfred offers to be his spirit guide (oh no) and Ryan agrees. Wilfred comes up with “Yeah, we’re lost.” Awesome guiding there, Wilfred, and awesome shot (the latter is not being said sarcastically).

The girl-on-girl kissing seems…ehhh, don’t you think? Dorian Brown and Fiona Gubelmann are both incredibly attractive young women. If I said more skin would have made it better, would that be too typical? Yeah? Probably? All right then.

The moon is rising on their trip and Wilfred says he’d like to apologize, but it doesn’t seem that it’s necessary. Ryan complains about freezing to death in his own mind. Wilfred tricks him into drinking more of the original drug, by claiming that it’ll warm him up. Now begins the trip within a trip.

Ryan is in a black room where a red light goes on. In the room is a gentleman dealing with pictures. The man asks about Wilfred and if he’s behaving. A couch—Ryan’s couch—appears and the man asks what Ryan’s question is. Ryan wants to know why he’s panicking. The man develops a picture and shows it to Ryan. It’s of a bedroom, Ryan’s bedroom. We see a scene of a younger Kristen trying to comfort a younger Ryan and telling him not to cry. Ryan figures out that it wasn’t the baby crying, it was Kristen telling the baby not to cry that made him panic, because it reminded him of their childhood. The man hands Ryan a photo of Amanda and him and tells him that maybe it’s time.

Ryan wakes up, twice, to Wilfred eating vomit off his shirt. He looks at his phone and sees the picture, then confesses to being sad. Wilfred, of course, really has to pee, but fights that urge to sit down and cuddle up next to Ryan. They sit there for a few moments, with Ryan crying, until Wilfred reminds Ryan that he really does need to go out, earning a chuckle from his buddy.

First word that comes to mind following the end of this episode? Heartbreaking, quickly followed by funny as hell (yeah yeah, that’s three words). Knowing that Ryan’s mind was shaping his trip made this episode pretty entertaining. He had a Native American as a spirit guide—since that was what he thought of when he heard the phrase–and the surroundings were natural and quiet. The second trip was sparser and creepier (because we were deeper into his mind or because there was a time limit, who knows?).

While answers about Wilfred would be fantastic, we should all know that for those to come to light, it would probably mean the end of the series (and if you didn’t think that, I’d have to wonder if we’re following the same show). Once we find out who (or what) Wilfred is, he won’t be the Wilfred we’ve known and grown to love. So, for now, little to no answers about Wilfred (while generally annoying) can be tolerated.

Speaking of Wilfred, I enjoy it when the writers throw certain actions and words in there to remind us that, hey, Wilfred is still a dog. For example, Wilfred eating the vomit off Ryan’s shirt (ew, by the way). A human being wouldn’t do that—I hope—even if he is dressed in a dog suit. A dog probably would though. A dog would also stay when told to, most of the time. Anybody else curious as to what Wilfred looks like other than a man in a dog suit?

Next week’s episode is titled “Resentment” and I can only imagine where that will take our two main characters. Perhaps we will finally meet Ryan’s father?