Tonight’s season finale, echoing the season premiere, was actually two brand new episodes back-to-back. The first of these episodes, “31st Century Fox,” was significantly more enjoyable than the second episode, “Naturama.” The rating reflects an average of both.

In “31st Century Fox,” the plot kicks off with the Planet Express staff asking for new uniforms after Mothzilla attacked their closet in Tokyo. Apparently, the Professor promised them new ones a year ago and never delivered on it, so they head to ‘Nvasions ‘N Such Space Uniforms in the Garment District. I know I bring this up a lot in my reviews, but the clever signs are my favorite part of the Futurama humor.

The shopkeeper is a Zoidberg-esque gentleman who cycles the gang through several different uniforms (including Fry as a Red Shirt from Star Trek and Zoidberg in a Storm Trooper uniform) before happening upon year-old uniforms ordered by an unpleasant man who never paid. Naturally, they’re Planet Express branded uniforms the Professor never picked up. Bender is more interested in a fox hunting getup, and returns to Planet Express in that outfit instead.

Leela protests Bender’s newfound interest in fox hunting, claiming it’s a cruel injustice. This has been my first season of Futurama, so I don’t know if Leela’s activism has been a huge part of her character in the past, but it just made so much sense. “Save the Fox” protest sign in hand, she joins Bender and the rest of the gang at a posh New Jersey fox hunting lodge.

After Bender tries to hunt the fox the easy way (with a hammer while it’s still in its cage), the Hunt Master gives the fox thirty minutes’ head start before they release the dogs and chase after it. Leela attempts to block their path, but gets caught up in the Hunt Master’s forest of booby traps. Honestly, all I could think about during the hunt scene was the fox hunt in Mary Poppins, of all things; at least, until Bender’s horse tripped on a fence and ended up riding Bender for part of the way. That was definitely Futurama funny.

The dogs corner the fox and start to rip it apart; I had braced myself for uncomfortable animated carnage, but the fox turned out to be a robot. Leela suddenly became okay with the sport, though Bender replaced her as group protestor. Back at Planet Express, he rallies some other robots together to stamp out robot animal violence, only to find out that the robots were built for the tasks that in our real life world cause cruelty to animals. The show doesn’t delve too far into it, but the question of robot ethics in science fiction is endlessly fascinating to me. If this weren’t a comedy, I think this plot could have taken quite a different, philosophically heavy turn.

As it stands, though, Bender just wants to go back and rescue the robot fox from the hunt. Fry and Leela help him free the fox in the middle of the night, and Bender stays in the cage to give the hunters a real surprise in the morning. He’s the one to be surprised, though, as they decide to just hunt him instead. He wastes his half an hour head start torn between hiding in the dark forest or running through an open meadow, but the Hunt Master gives him another chance.

Meanwhile, the robot fox is wooing everyone at Planet Express with his cuteness. At least, until it destroys their brand new uniforms everyone loved, ate one of Amy’s prize chickens (side note: Amy keeps chickens?), and ruined Leela’s perfect protest sign. They chase the fox at gunpoint until it hops a train back to New Jersey.

In the New Jersey woods, Bender is having trouble surviving on his own, and ends up with his foot in a trap. The robot fox comes to his aid and gnaws Bender’s ankle free of his trapped foot and the two team up to trap the Hunt Master. Leela and Fry have come in pursuit of the fox, and Leela’s in the midst of a lecture about right and wrong when she notices the Hunt Master is missing. He’s gone rogue, hunting Bender and the fox on foot, and he falls right into Bender’s anti-gravity trap.

It’s a very intense moment, and even the animation changes markedly to reflect the drama of Bender’s monologue about feeling hunted as he looks down the trigger at the Hunt Master. He can’t shoot him, though; at least, not until Fry returns his trigger finger to him. It’s amusing, and a callback to when Bender couldn’t shoot the Professor, but only because the safety was on. The fox attacks before Bender does, and flies at the Hunt Master’s face, revealing the circuitry beneath. Leela’s busy trying to puzzle out if all the parties involved being robots still makes the hunt wrong or not, but ice cream and the Hunt Master’s head mounted on Bender’s wall seem to erase her of her doubts.

Overall, this first episode of the season finale was a perfectly average, amusing episode of Futurama. Nothing to get terribly excited over, but definitely the stronger of the two new episodes that ended the season.

Bender: “Well, I am descended from Prince Albert’s can.”

Fry: “Can we stop for ice cream on the way back?” Leela: “And on the way there?”

Bender: “I wish I’d remembered more survival skills from Boy Scouts. Too bad my only merit badge was in interpretive dance.” 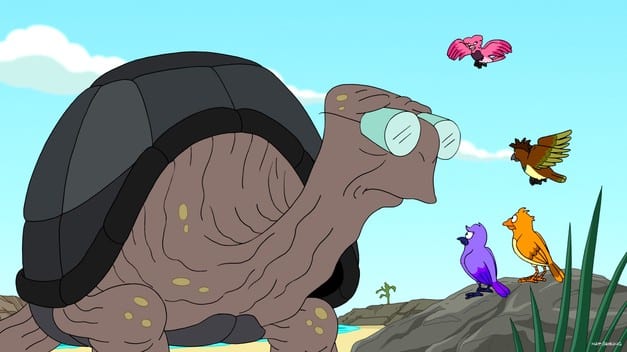 “Naturama,” the second half of the season finale, was different starting with the theme song. Instead of the usual tour around New New York, we were treated to the introduction to Mutual of Omicron’s Wild Universe, a nature documentary about animal life on planet Earth. The “documentary” is split into three parts: the Planet Express gang as salmon, as Galapagos Island wild life, and as elephant seals. There were funny lines sprinkled throughout, and I did enjoy the narrator’s pessimism about the wonders of nature, but overall this episode didn’t resonate with me.

The first third of the episode focuses on the gang as salmon while the narrator describes the salmon’s admittedly strange life cycle. Well, I say “the gang,” but Zoidberg is a real lobster instead of a fish like the rest of them. I will readily admit to not recognizing all of the minor characters that featured as a few of the salmon, but they’re quickly killed off in the migration process anyway, leaving Fry, Bender, Amy, Hermes, and the Professor to make it to the ocean.

Salmon Fry meets Salmon Leela and they agree to go back upstream together when they’re mature to make little salmon babies, even despite Salmon Zapp trying to get Leela for himself. Fry and Leela have a mini-montage of romantic undersea dates, including a Lady and the Tramp-type sharing of an underwater worm. But when the time comes to return to the stream they were born in, it turns out Leela was born one stream over from Fry, and they can’t just switch. Even the narrator can’t explain it, which was a welcome change for me from most nature documentaries.

Luckily for Fry, Zapp gets eaten by a bear before he can, you know, fertilize Leela’s eggs. Fry manages to hop across streams, but only makes it as far as the bank, where he’s saved by the bear’s nagging wife. He and Leela finally get together… and then instantly die. This is only slightly exaggerated; real salmon mate and then die within two weeks. I have to agree with the narrator’s bleak summary of the salmon: it seems they lived and died for no reason.

The middle part of the “documentary” features the Planet Express gang as Galapagos Island animals. Most are finches, but Bender is a marine iguana, Zoidberg is a quickly ignored blue-footed booby, and the Professor is the focus of the film: Lonesome Hubert, the last male Penta Island tortoise.

Lonesome Hubert only wants to ensure the continuation of his species before he dies. He remembers seeing “a hot piece of shell” on the far side of the island fifty years ago. Really, it’s a hundred feet away from his current location, but it takes the Professor and the gang eighteen months to get there. Fry is now the great-grandson of the first Fry, and his beak is slightly different to eat better on this side of the island, though it really doesn’t help much. Darwinian humor, in retrospect, is really not the funniest.

The Professor finds a rock vaguely in the shape of a tortoise and is in the midst of making his moves on it when he’s interrupted by the tortoise version of Mom, who’s been saving herself for Lonesome Hubert. She pushes the rock off the edge in a fit of rage at the “hussy” to Finch Leela points out how ridiculously uncomfortable witnessing this whole thing is, because I was concerned I was the only one with the urge to change the channel. Or at least to mute it; the Professor’s drawn out quavering moan was almost more than I could deal with.

The species saved with Mom’s three eggs, the animals went their separate ways. The three eggs hatch into admittedly adorable baby tortoises who topple down to the beach only to get crushed by the rock that the Professor thought was such a babe. And so ends their species as well as the middle part of the episode.

The final third of “Naturama” features the Planet Express folks as elephant seals relaxing on a beach. Bender, the biggest and most obnoxious seal (how fitting), is the beach master, rewarded with a harem of seal ladies. Fry, the Professor, Kif, and Hermes are the beta males of the group, but Kif falls in love with Seal Amy, much as real Kif has fallen in love with real Amy in the regular Futurama universe. He attempts to woo her away from Bender with a tasty squid snack (it’s Zoidberg, of course; the poor guy can’t catch a break no matter the setting, it seems), but it’s unsuccessful.

Kif challenges Bender to a duel for the right to be beach master, and they slam their seal torsos together for days on end. “The battle will rage for hours,” the narrator intones dramatically. Bender ends up smashing Kif into oblivion, which was only to be expected considering his monstrous size. While the seagulls clean up the mess, it appears that the other beta males have snuck around with the beach master’s ladies while he was distracted; each of them have a little mini-me baby seal in front of them at the end of the “documentary.”

I don’t know if there would have been more potential for humor if each of these three parts had been given more time or if it was just the odd subject matter that threw me, but in any case, “Naturama” was not a shining example of what I’ve seen of Futurama this season. I’d say it was by far the weakest episode I’ve seen to date. I enjoyed that Futurama was willing to play with its usual setting and format, but the nature documentaries just weren’t as funny as I’ve seen the show be before. I hope the show will return to form when it returns for its next season, because up until this last episode, I’ve really enjoyed my season-long introduction to Futurama.

Zapp: “You haven’t ignored the last of me!”

The Narrator: “200 million years of evolution snuffed out. For in the end nature is horrific and teaches us nothing. Coming up next, the hilarious antics of the elephant seal, the clown of the sea.”

The Professor: “Harem? I can barely see ‘em!”