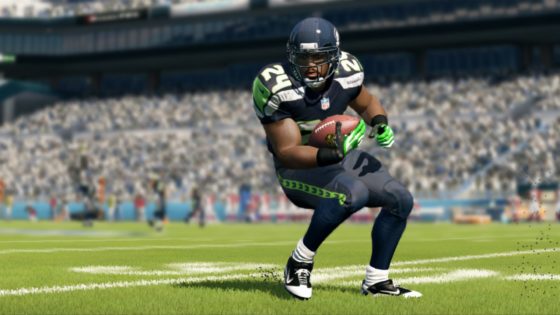 If last year’s Madden were an NFL Team, it would have been one of those “rebuilding years.” They would have fired their head coach, if not their entire coaching staff and spent a significant amount of time snagging up free-agents and investing in the draft.

The result of all of this off-season work is Madden NFL 13 — far from a mere roster update, this year’s game adds a ton of new features including a brand new physics engine, new commentary system and an innovative (if not somewhat misguided) interface that blends all of the franchise’s signature modes together. Thanks to a may not be ready for a Superbowl run, but in one year Madden has gone from running joke to serious contender.

The star of this year’s game is the new Infinity Physics Engine, which adds an incredible amount of realism to the game. In short, physics and contact matters for the first time in a Madden game — and it’s very cool to watch. Playing as my beloved Green Bay Packers, Aaron Rodgers heaved a burner of a pass over the middle to fullback John Kuhn, who leaped up — caught it and used his falling momentum to knock over and drag a defender a few extra yards. There are plenty of new animations that give the game a much more authentic feel and create plenty of moments that are sure to make you jump out of your chair — especially when you’re playing your friends.

The Infinity Engine adds a much more emphasized sense of weight to the Madden formula. Players no longer feel like mere game pieces on a board and instead everything from pursuit angles to distance of of course, mass matter that much more. One of my favorite moments came when Aaron Rodgers fought his way out of the pocket and a pursuing Jared Allen, almost falling down twice in the process.

The Infinity Engine adds a bit of an unpredictable element to the game (not to mention the fact that it lessens the amount of tackles animations you’ll see repeated) but it’s not perfect. There were plenty of times when players would be near each other and the game would trigger an animation that would result in a wonky animation or play.

Year after year, one of the biggest complaints about the Madden franchise is the fact that the game always looks the same. Sure, the game still features the same basic graphics package as years before, but Madden 13 has a slew of small touches that add up to a big jump in production values.

The first is the inclusion of the inclusion of CBS Sports’ A-Team, Jim Nantz and Phil Simms on commentary. The duo’s natural chemistry and conversational tone are a good fit for Madden, and a welcome change from the “Oh My God Everything is so exciting!” tone of Gus Johnston from last year’s game. Simms and Nantz discuss team’s and happenings around the league very naturally and they rarely seem like they’re just sitting in a booth recording lines. 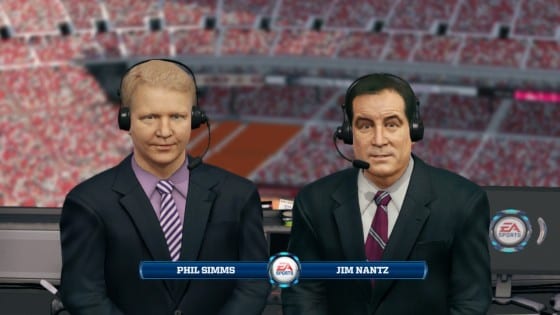 Along with the new commentary system, the game’s visuals have been given a remarkable update that provides the most realistic visuals in recent memory. Games now feature much more dramatic intros and CBS style overlays and a new dramatic lighting system makes for a very realistic version of a our favorite Sunday afternoon pastime. Even the sound of on-field chatter sounds better. Of course, there are still those weird Madden-isms that include strange animations and weird visual disappearances but they’re not quite as noticeable this year.

The biggest gameplay change this year is the addition of Connected Careers, which takes the place of franchise, onlinre and superstar modes. Essentially, Connected Careers is your one-stop-shop for all-things not exhibition play. You’ll start out as either a coach or a player — either choice lets you choose either a current player or coach, a legend or one that you’ve created. Selecting a coach essentially puts you into the franchise mode of old. You’re given your season goals and have full control over the team, and selecting a player puts you into the superstar mode of old and your goal is to become a starter and then eventually make it into the Hall of Fame as one of the most successful players of all time.

Where connected careers sets itself apart is that it plays out less like sport’s game and more like a RPG. For each task you complete, you gain experience points and allot them as you see fit to make your player or coach that much better. In a nice touch, the game gives you some of the most experience points for running drills in practice, allowing for younger players who may not be starting to get the experience points they need.The virtual Twitter feeds of ESPN personalities like Trey Wingo and Skip Bayless are a nice touch as well.

If there was a complaint about Connected Careers, it would be that it gives the oplayer all of these options – -without explaining them all that well. Connected Careers is one of the biggest changes the franchise has seen in recent years, and comes with a slew of different options that fans have never seen, and changes to some options that they’ve come to know and as a result, I found myself searching for certain things in the (much improved) menu system. To the game’s credit though, once you get into the mode and spend some time with it, it’s easy to navigate.

There are of course a few other tweaks and additions under the hood — like the addition of NCAA 13’s passing system (read: you’re going to get picked off a lot if you play like previous games). If you’re playing on the Xbox 360, you can use Kinect for a number of different things, but they never go past gimmicky. You can scan in your face to use in the created player suite, as well as calling plays or audibles at the line with your voice. While that may seem fun, all you’re really doing is navigating through menus in a different — less efficient way.

The Blast Factor: By now we’ve all heard the complaints about Madden. It’s never more than just a roster update, it’s the same game every year — all of these are now no longer valid. Madden NFL 13 adds a slew of new features that make a genuine difference in between franchise iterations. The commentary? Better. the gameplay? Better. The gameplay? Miles ahead of last year. It may have it’s quirks, but Madden NFL 13 is how to silence critics and rebuild an aging sport’s franchise.