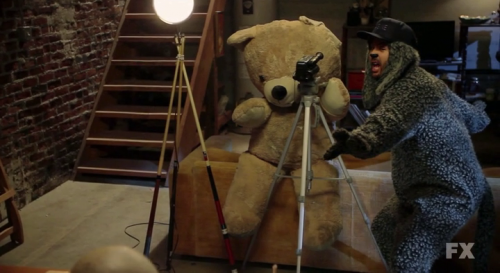 The one-liner synopsis for this episode–“Ryan and Wilfred go to extraordinary lengths to help Jenna’s career”–does not even begin to explain this episode, however ‘extraordinary’ is a fantastic word for it.

Jenna shows Ryan an article about his ex-coworker who sold secrets to a rival company, which explains why his boss killed himself and the company was ruined. Ryan discovers, from Jenna, that the coworker’s lawyer is Ryan’s father. Jenna wants to get her career back on track and thinks this is the way to do it–she wants Ryan to get his dad to talk to her. Wilfred has a scratch on his face, which Jenna thinks is from bushes (clearly not how that happened, but all right). Jenna’s been reduced to 30 second segments (they cleverly titled them ‘Squish’). Ryan offers to talk to his dad for her, feeling guilty for being the reason why she’s in her current position. Wilfred attempts to convince Ryan to tell Jenna the truth about what happened with the Squishy Tits Situation. Wilfred admits to getting into a scuffle with some Dobermans (probably not the true story too), which Ryan has never seen before.

Introducing the Dilemma of the Night: Jenna’s career. We all know why she hasn’t had much luck (I’ll give you three guesses and the first two don’t count) so it was only a matter of time before this was brought back up again. It’s a bit annoying that it took this long to come back to and that it didn’t play a large role in the season. Jenna wasn’t around enough for us to know how her career was doing until this point. Wilfred is up to something, and it’s bound to be an interesting situation for all parties involved.

Wilfred is reenacting the fight with the Dobermans in the basement. Ryan hears a cat’s meow, and Wilfred reveals a hidden door underneath the coffee table (under a rug, if that’s important). On the other side of the door is the missing cat, along with a few more furry friends, to bring the total to 6.

Wilfred is telling the real story about the reason for the scratches on his face–a cat. Wilfred took the cats as revenge for the scratch. He’s going to drive them insane by dangling string above them (and probably kill them).

While we see Wilfred as a man dressed up in a dog suit, we’re reminded of his dog status by choice words or phrases spoken by Wilfred, or his opinions that crop up every now and then. Tonight is a good example of that. Wilfred, seemingly, despises cats and has taken that a step further by kidnapping the cats (catnapping?). Taking the cats is just another way for us to remember that Wilfred is indeed a dog.

Ryan thinks that the six cats missing are going to be a big enough deal to get Jenna’s career back on track. She isn’t impressed and asks if he’s heard back from his dad. Ryan tells her that he said no (when will we meet this mysterious father?). Jenna thinks it’s time to try a different career (her cousin is a rep who sells sleep apnea equipment and they’re apparently looking for new reps). She leaves and Ryan informs Wilfred that when it gets dark, the cats will be released. Of course Ryan tries to take the easy way out by trying to find another story that would resuscitate Jenna’s career. Anything as long as he doesn’t listen to Wilfred, right?

Ryan is gathering the cats together, and Wilfred wants to make a suit from their hair/fur. Ryan’s phone is ringing and it’s Jenna. She got an email from a psychopath claiming to have the cats. He’s supposedly sex-butchering the cats and recording the act, promising to send the video to her in time for her to air it the next day. Oh Wilfred.

Ryan is freaking out about the situation Wilfred has once again put him in. Wilfred points out that neither he or Jenna would be in their current predicament if Ryan would just come clean about what happened. Not happening. Ryan asks if they’re making the video and Wilfred says they are. Was there really any doubt?

Wilfred is directing the video, with Bear behind the camera (hey Bear!), and Ryan is acting as the killer. Wilfred cuts a couple times looking for more from Ryan. “And now, let the first blood be spilled!” Ryan cuts this time, refusing to kill the cats. Wilfred, of course, throws a fit (reminiscent of Christian Bale’s rant). He ends up kicking the camera over, sighing, and agreeing to shoot it with stuffed cats instead. Best scene of the night, hands down. Christian Bale’s rant was amusing the first time around, and now that it’s been Wilfred-ized, it’s downright hilarious. It can’t be possible to damn god anymore than Wilfred did in this scene. His calm demeanor following his rant is equally as funny.

Ryan is editing the video and he’s clearly annoyed about the situation. Wilfred is over his shoulder giving his opinion on it and not making Ryan’s mood any better. He departs and we’re flashed to the next morning. Jenna arrives with the video and she plays it for Ryan and Wilfred. It’s so not the video that Ryan was working on. Instead, it’s like one of those animal abuse videos, villianizing cats for scratching dogs and targeting postal workers. Jenna is completely crushed and seems well on her way to selling sleep apnea masks door-to-door. How is Ryan still surprised about what Wilfred is capable of?

Wilfred is clearly pleased with himself and now Ryan’s upset about Jenna getting ready to quit her job all because of…(drumroll please) him! Enter the Realization of the Week, where Ryan finally understands who is to blame for Jenna’s career being in shambles. Wilfred points out that Ryan wasn’t honest with Amanda and that he lost her, suggesting that maybe honesty is the best policy in this case. Ryan catches up with Jenna and finally tells her the truth–about the candy and the urine switch…and the blackmail. She flips, as any sane woman would do in that situation. Wilfred really did think it would work out and is sad to see that he was wrong.

Jenna is on TV doing a segment on candy (specifically pot candy and how it looks similar to regular candy) and Ryan comments on how great it is. He’s depressed about Jenna never talking to him again. Wilfred is laying down and cuddling with the kitties that he catnapped. Ryan’s annoyed that he’s now lost his relationship with Jenna for being honest when Wilfred wasn’t being honest about liking cats.

Outside, Ryan and Wilfred are taking the box of cats to let them go when Ryan notices Jenna. They talk. Jenna takes partial blame for making him care. She admits to using him and noticing the crush he had on her. “You did everything for me and all I did was smile and flirt and string you along.” She apologizes and they hug. All better now, with their relationship and Jenna’s career. She credits him with inspiring her to do the pot candy segment, which is leading to some great opportunities for her.

Ryan and Wilfred are unloading the box of cats and Wilfred is saying his personal goodbyes. Suddenly, there’s barking and we see three Dobermans charging toward the released cats. Let’s just say, it turns messy. RIP kitties.

The episode formula was apparent tonight, however the comedy was fantastic and spot-on. It seems that things are starting to get wrapped up–loose ends are starting to get tied. We discovered the reasoning behind Ryan (and the rest of the employees) losing their jobs and their boss committing suicide (not a long string to be tied, but still nice). We finally got Jenna back and from what I hear, it’s for the rest of the season (source: Twitter). The elephant in the room between Jenna and Ryan has now been shrunk to a easy to deal with mouse-size.

There is one thing that should be mentioned. Jenna began to say something about how the false positive pregnancy test was the reason for…and then it was dropped. Perhaps this new revelation means that her relationship with Drew will cease to exist? That is something to pay attention to for the next episode, which is entitled Questions. Will Jenna be asking herself questions about her relationship with Drew? Or will it somehow be about Ryan’s father? We can only wonder (and hope it’s the latter).