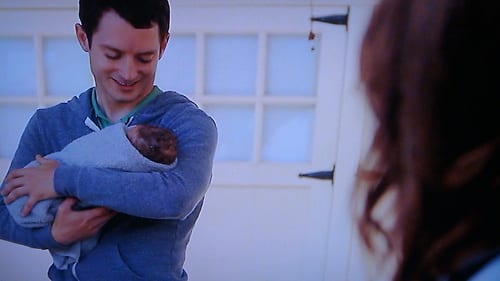 Mary Steenburgen reprises her role as Catherine, Ryan’s and Kristen’s mother, and it leads to quite the interesting road trip between her, Ryan, and Wilfred.

At work, one of Ryan’s co-workers asks about Amanda. We find out she’s been out sick. Poor Amanda. Wilfred walks in being…well, Wilfred. Annoying, obnoxious, and adorable–all rolled into one fuzzy large package. There’s an office meeting going on, and we learn that things are not looking good at Ryan’s place of employment (they lost, big time). Ryan’s boss tells some story about his grandfather being stuck in a mine for days, and he never gave up hope about getting out. The story and the following speech seems to give everyone a good feeling. Then the boss leaves and we hear a gunshot and see a splatter of blood. Now nobody has a job. Wilfred walks over with blood all over his mouth, saying that someone might have eaten the boss’ brains. Ew. This is really turning out to be a bad few weeks for Ryan, isn’t it?

In the basement, Ryan is getting high when he gets a phone call from his sister. Kristen is calling from her appointment, which Ryan decided to skip. Kristen doesn’t want to be alone in the delivery room and instead of supporting her, Ryan asks if she can find someone else. Somebody needs to teach Ryan how to deal with a pregnant woman. Wilfred is his happy-go-lucky self, but Ryan is as depressed as ever. (Jenna is out of town, AGAIN, by the way. Just in case you were wondering.) Wilfred is teaching a lesson about service and getting up to help others. Ryan gets a text from his mother, Catherine, asking him to visit.Mittens, Catherine’s cat, is dead and that is her reason for asking Ryan and Kristen over. Mittens was very close to Catherine and she’s taking the death a little hard. “So is the baby a mulatto?” Catherine asks Kristen following Mittens’ burial.

Ryan suggests that their mom help Kristen in preparing for the baby. Kristen seems less than thrilled, but she accepts the help. Atta girl, Kristen.They go to the doctor to ask for her mother’s release, but the doctor says no way. He suggests managed care (a more stringent form of care than she’s currently receiving) and asks for their help in convincing their mother. He also hands Ryan a business card of a therapist who helped him out. We’ll never see that card again. Ryan is talking to his mother and she’s regretful for not being there for Ryan and Kristen. She expresses a desire to run away from everything. Ryan echoes the idea to escape and to be free.

Ryan is speaking to Wilfred about taking a trip to Mexico. Wilfred refuses to go and Ryan walks away. Wilfred calls him on his bluff and Ryan jingles the keys. Nothing gets a dog moving like the jingling of keys.

On the road, Ryan gets a text from Kristen asking where he is. He ignores it and seems to be enjoying himself with his mother. Wilfred is freaking out about being in the car for so long. Ryan tells him to sit down, and when he won’t, he swerves the car and Wilfred smacks into the side of the car. Haha, oh Wilfred. Catherine and Ryan reminisce about the old days and it’s clear that she really isn’t doing that well.

Wilfred confronts Ryan about this road trip idea, asking if this is really what’s best for his mother. He points out her earlier mistake about saying “the kids” instead of “you and your sister” and says that this isn’t going to help her at all. Ryan gets a call from Kristen asking where he is and mentions that their mother needs to take her medication…which they don’t have. Ryan does find a bag full of kitty litter though. Kitty litter is totally going to keep the crazy away, don’t they know that?

Back in the car, Ryan tries to convince his mother to turn around and go back. She brushes him off (of course) and Wilfred starts to freak out. They get pulled over by a cop on a motorcycle. She tells him to stay cool and Ryan finds out that she stole a few things from their last stop. She also doesn’t have a license with her and when he asks for her to step out of the car, she proceeds to back up into the cop’s motorcycle. This causes Ryan to absolutely freak out. Catherine calls him ‘Henry’ and Ryan reminds her that he’s not his dad. He almost convinces her to let him drive, but she decides to drive away without him…but with Wilfred. Uh oh.

Kristen picks up Ryan and is on the phone with the police. She scolds Ryan for his decision, but Ryan figures out where they are (free kittens!). Kristen tries to get Catherine to take her medication, but she smacks it out of Kristen’s hand. Kristen bends over in pain, clearly heading into labor. Wilfred tells Ryan to just help his sister out (lesson learned, again) even if it means looking at her “slop-hole.”

Ryan’s holding the baby while Kristen is rolled (on a stretcher) toward an ambulance. He sits down with his mother and explains to her that the best way to help Kristen is to help herself. He offers her the baby and she takes it (him? her? I have no idea). Wilfred walks over with blood on his face again, claiming that someone ate Kristen’s placenta.

Wilfred and Ryan are talking about something, and it turns out Ryan is visiting his mother in her new “situation.” She’s doing really well and they have a cute, bonding moment. Definitely a different sort of “last scene” than we usually see…and then we get the norm. Ryan and Wilfred hanging out in the basement and Wilfred starts kicking his legs in his sleep. He gets up and runs right into a wall. He had a dream about someone in a g-string. It was very real.

Tonight’s episode was a nice change from last week’s. It was wonderful to see Dorian Brown back as Kristen. She is a stunning woman and she’s great with comedy, even in the few scenes she was in.

This episode was a lot lighter than the last and the comedy was a bit better. This kind of episode is what I think of when I think about Wilfred. Wilfred, once again, taught Ryan a valuable lesson and managed to pull him out of his slump, while maintaining and bringing the laughs. The typical dog things that they include for Wilfred to do are hilarious. The jingling of the keys, the swerving of the car (twice) to make Wilfred smack the side of the car, and eating just about anything (preferably bloody and gross).

The real scene stealer tonight was Mary Steenburgen. She is such a fantastic actress who really can nail her lines. Her role as Catherine really shows us what life could be for Ryan–or end up being, depending on the route they seem to be heading in. She plays it brilliantly, even with the balancing between being crazy-funny and crazy-off-her-meds-sad-yet-funny.

Next week’s episode is titled “Honesty” and one can only imagine where that’s going to lead Wilfred and Ryan. Can we see Fiona Gubelmann soon? Please?