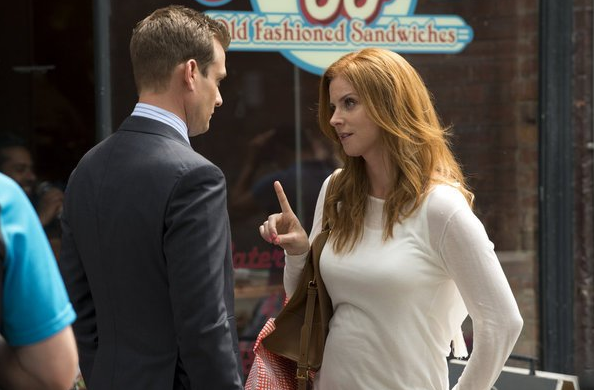 After putting up a brief fight, Donna agrees to return to Pearson Hardman

With Asterisk, “Suits” went back to its nearly flawless writing and provided an effective setup to next week’s final episode before the midseason break.  The vote between Jessica and Hardman has almost arrived at Pearson Hardman, and one man is at the center of it all:  Louis Litt.  Asterisk brilliantly highlighted Louis’ relationships with Jessica, Hardman, and Harvey and exposed all the factors that will go into his deciding vote.  As Donna returns and Mike and Rachel seem to be rekindling their feelings for one another, everything is coming together for one hell of a midseason finale.

Harvey intends to make good on his promise to Jessica at the end of the last episode, so he meets up with Donna and begs her to come back.  The ensuing conversation may have revealed certain aspects about the relationship between the two of them.   Donna is clearly upset about Louis making it look like she’s in love with Harvey and insists that she loves him like a brother but nothing more.  But there are hints at a past romance between them, when Harvey tells Donna that, “You once told me…” and when Donna references a dinner party and “the other time.”  Both of their comments are vague enough to be passed off as something innocent, but at the same time, this could be the first real evidence of a past Harvey/Donna hookup.

Unfortunately, Donna’s return to Pearson Hardman was the most disappointing part of Asterisk.  In an instant, she goes from pissed off and hurt to happily accepting Harvey’s offer to come back to the firm.  Also, when she asks how Jessica feels about her return, Harvey informs her that he’s already cleared it with her.  How does that make any sense whatsoever?  There’s a reason Donna was fired—she destroyed evidence after concealing it from Harvey years ago, and her actions could have resulted in the downfall of the entire firm.  And yet, Jessica has no problem with her coming back and greets her merrily as if nothing ever happened.  Plus, why doesn’t Hardman have anything to say about her return?  If somebody is going to make a stink about it, surely it would be him.  But no, Donna strolls back into the office with a bounce in her step and not a soul at the firm has a thing to say against it.

Obviously the writers had to bring Donna back, that’s a no-brainer.  She’s one of the most likeable and funny characters on the show, and her relationships with Mike, Harvey, Louis, and even Rachel are all entertaining for their own reasons.  If Donna hadn’t returned, it would have been a huge mistake.  But the exceptional writers of “Suits” are more than capable of coming up with a reason for Donna’s comeback that actually makes sense.  It shouldn’t have been so easy, and the fact that it was makes it seem like her triumphant rebound was a bit of a rush job in the writing room.

Meanwhile, Louis is handing out bonus checks and when he gets to Mike, he doesn’t have one for him.  Mike goes to Harvey to investigate this, and Harvey reveals that he wanted to give him the check personally.  When Mike remarks at how big the bonus is, Harvey explains that it’s partially due to the people he persuaded to vote for Jessica.  Reluctantly, Mike admits that they lost one of their supporters, which means Hardman and Jessica are dead even for votes.

The bad news for Jessica’s team is that Hardman has already come to this realization and has focused his efforts in getting Louis’ vote.  As we’ve seen all season, Hardman has been slowly but steadily convincing Louis that he appreciates his hard work at the firm, unlike Jessica and Harvey.  By preying on Louis’ need for recognition and appreciation, Hardman has clearly pulled ahead in the bid for Louis’ loyalty and his vote.  To help seal the deal, Hardman offers to finally promote Louis to senior partner.

It is really kind of sad to see how easily Louis can be wooed by Hardman’s senior partner offer.  Though Hardman may be the one doing the bribing, the fault rests squarely on Jessica’s shoulders.  Later in Asterisk we see how resistant Louis is to joining Jessica’s side, and with good reason.  Louis has every right to be pissed at her, because he’s right in calling her out for never showing him the respect he deserves.  Even Harvey admitted to the fact that Louis is the hardest working lawyer at Pearson Hardman, so where’s his promotion to prove it?

Louis approaches the newly reinstated Donna while riding high on his wave of just making senior partner at the firm.  First, he offers Donna a heartfelt apology for the way he attacked her during the mock trial.  Then, he excitedly hands over season tickets for a show that Donna loves.  When she comically asks him, “Do I have to go with you?” he exclaims, “Hell no!”  After Louis makes a comment about how the day couldn’t get any better, Donna puts everything together and recognizes the situation.  She brings Louis’ recent promotion to Jessica’s attention, and the bidding war for Louis’ vote officially begins.

Jessica confronts Hardman about buying Louis’ vote by promoting him to senior partner.  Hardman explains that Louis earned the position years ago, and that her failure to promote him demonstrates how her decisions have hurt the firm.  Is it okay to agree with the villain?  Hardman is clearly the antagonist and the bad guy in this second season of “Suits,” but at this moment he’s making perfect sense.  Jessica really should have made Louis senior partner ages ago, and it’s only fitting that her misstep could now cost her the vote.  Maybe this sticky situation will finally teach her a lesson.

In typical Jessica fashion, she asks Harvey to fix everything for her.  She demands that he figure out a way to change Louis’ mind and get him back on their side.  Try as he might, “the best closer in New York City” just can’t get Louis to change his mind.  Harvey takes Louis to dinner to congratulate him on making senior partner, but in reality he uses the opportunity to tell Louis that Hardman tried to frame him for embezzlement before he left the firm years ago.  Despite this news, Louis refuses to give Jessica his vote and storms out of the restaurant.  Later, Harvey’s figurative speech about baseball and Louis having an asterisk next to his title of senior partner (because Hardman bought him with it) doesn’t convince him either.

When Harvey reports back to Jessica with his failings, she explains that she always planned on talking to Louis personally.  She didn’t think that Louis would believe what Jessica has to say unless she sent Harvey first.  She admits that she has to tell Louis that he deserves to be senior partner, but Harvey insists that she needs to do more.  Harvey explains that Louis’ anger runs deep and that he’ll only be satisfied if they feel pain.  He suggests that Jessica gives him that satisfaction by giving him Harvey’s office.

This chain of events was fun to watch.  It was great to see Louis stand up to Harvey and not buy into his baseball metaphor speech.  Too often in television, the hero gives such a rousing speech, and the antagonist is instantly persuaded.  It was quite enjoyable to see Louis deny Harvey again and again despite Harvey’s best-laid plans.  The conversation between Jessica and Harvey was interesting too.  Harvey’s willingness to sacrifice his office for Jessica’s benefit was surprising and moving.  It was great how he reminded Jessica about their prior conversation regarding Harvey’s ability to put her needs and the needs of the firm above his own.

Instead of going the apology route, Jessica decides to threaten Louis instead.  She tells him that she doesn’t take kindly to being threatened, and that when she wins the vote, if Louis is on the wrong side there will be no coming back.  On the flip side, Hardman apologizes for trying to frame Louis for embezzlement and insists that he isn’t the man that he was five years ago.  Now that both sides have made their cases, it’s up to Louis to make his decision.

While the Jessica / Daniel war was raging on, Mike and Rachel were beginning to reestablish their old flame.  Mike is on the hunt for a new apartment for his grandmother, and Rachel helps him find the perfect place.  Also, Mike opens Rachel’s test results for the LSATs and celebrates with her when they discover that she passed.  In their last scene together, Rachel breaks the news to Mike that his grandmother passed away, and embraces him as he breaks down.  The teaser for next week’s episode showed a glimpse of Mike and Rachel kissing, so it would seem that they’ll be heading back to romantic territories sooner rather than later.

As is always the case with “Suits,” so many things were packed into this one episode.  Donna came back, Mike’s grandmother died, Mike and Rachel seem to be headed back toward being together, Louis found himself caught between Jessica and Hardman, and so on and so forth.  And in between all that, there was somehow still time for a brief case about a Yankee player doping.  Almost every Thursday night, this show continues to amaze me by packing so much material into just an hour-long show.  Asterisk was no exception, putting all the pieces in place for an epic conclusion before the show goes on its midseason break.  This show is at the height of it’s game, with no signs of slowing down any time soon.