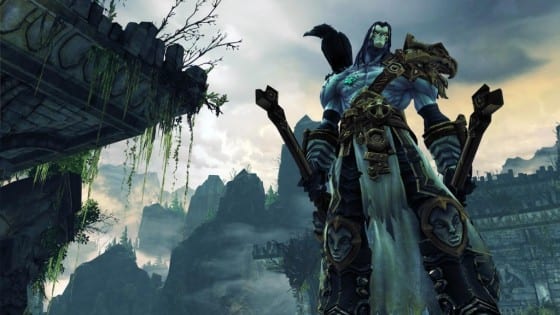 When it was originally released in 2010, Darksiders surprised a lot of people. It was a fantastic, if not flawed mix of elements from some of our favorite franchises. It had the puzzle elements of The Legend of Zelda, the combat of God of War and some surprisingly great platforming mechanics.Now, two years later the sequel has finally hit shelves, and amazingly enough, it’s those same features that somehow hinder it.

With Darksiders II, Vigil does a lot right, it offers a ton of new content and gameplay mechanics — but none of them seem like they’re all they could have been and you can’t help but wonder how great the game would be if it just focused on one thing instead of shooting for the moon. Still, Darksiders II is a fun and at times daring adventure that is more than worth your time.

Darksiders II does away with War, the horsemen protagonist from the original in favor of his brother Death, who believes that his brother is innocent of crimes that resulted in humanity’s destruction and sets out to prove it. Just how does he do that? Apparently jumping from platform to platform and mercilessly slashing a bunch of dudes in half. There’s a narrative here, and it’s long winded and goofy, but it never stops being entertaining. It echoes the best (and sometimes most cheesy moments) of films like Lord of the Rings and Clash of the Titans, and if you don’t mind the occasional eye-rolling dialogue, you’ll have a good time here.

Death’s adventure will find you traveling through some pretty unique locations, as the sequel dwarves the original in terms of content and land mass. Most of the original took place on Earth, but the sequel creates its own worlds and the art direction is impressive to say the least. These locations range from fire-scorched wastelands to lush fields and even snow covered caverns. It may have its issues, but Darksiders II has created one hell of an imaginative setting.

Much of Darksiders II plays virtually the same — you’ll run, jump and cut a bunch of undead baddies in your quest to restore your brother’s name. Death has the ability to carry two weapons, one dealing out quick damage and the other of the more slow and punishing variety. As you play through the game you’ll have the ability to pick up items and weapons from fallen enemies and cast some pretty cool spells (I was partial to being able to summon spirits from hell to do my bidding).

The problem with this though is that it never really feels like it matters all that much. Besides a few sequences where you’ll be required to learn a new spell or move to complete a task, a lot of Darksiders II is repetitive and boils down to your most basic hack and slash mechanics. Perhaps most disappointing is that the game features a deceptively deep upgrade system that only really matters as much as you want it to as very few enemies require much strategy besides running up, mashing buttons and occasionally dodging attacks. That doesn’t mean that the combat here isn’t satisfying, as you’ll thoroughly enjoy slashing up your attackers — at least for a bit.

It’s also frustrating to be in the midst of combat and have to fend off not only hordes of enemies, but a camera that seems to be intent on showing off how awesome the art is on Death’s back. The game constantly takes cheap shots by positioning the camera in the worst possible position and as enemies keep coming after you from off screen fights turn into you constantly running around to get a better vantage point..attacking and then repeating. Amazingly, it even has the same effect on the game’s best feature — it’s remarkable boss fights.

The Blast Factor: Darksiders II is that kid in school who takes every extracurricular activity in an effort to impress others. Sure, it’s impressive — but maybe it’s time would be best served focusing on and perfecting one thing. Don’t be fooled though — Darksiders II is still incredibly entertaining and worth picking up — faults and all.