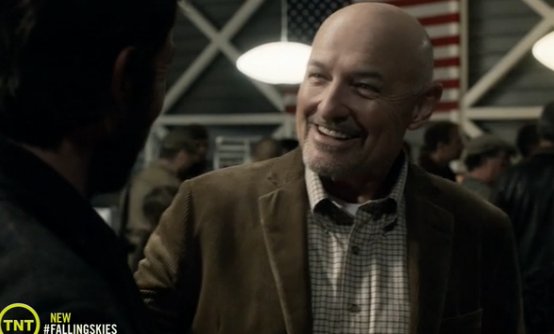 In “The Price of Greatness,” the 2nd Mass was finally introduced to the heart of the human resistance movement in the new capital of the United States—Charleston, South Carolina. The residents of Charleston initially welcome the 2nd Mass with applause and praise, but the group’s popularity fades quickly. Once Tom starts preaching about an alliance with the skitter rebels and news gets around about his abduction (as well as Weaver’s illness), the new arrivals are soon treated as a potential threat to the colony. “The Price of Greatness” was a decent episode that effectively leads into next week’s season finale.

As Porter leads Tom Mason and the 2nd Mass down into the underground city of Charleston, the group is ushered in with cheers from the colonists who have gathered to greet them. Mason, Weaver and the rest of the gang marvel at the good food, comfy beds, and general sophistication of the colony (it even has a school). To further sweeten their new surroundings, Weaver is reunited with his daughter Jean and Charleston’s leader turns out to be Tom’s old college professor, Arthur Manchester (Terry O’Quinn, formerly of “Lost”). Plus, Anne and Lourdes start new positions at Charleston’s hospital.

Arthur invites Tom to meet with him in his office. He asks Tom to support him when the community takes a vote over Arthur’s continuing role as the Majority Leader of the new colony. He also would like Tom to play a key role in the leadership of the city and the rebuilding of the United States government in this post-invasion world. But Tom has something else on his mind: the skitter rebellion. He pleads with Arthur to consider joining forces with the skitter rebels, but Arthur sees it as a crazy idea and advises Tom not to speak of such a thing again.

It’s easy to see where Arthur is coming from with not wanting to go on the offensive just yet. It makes perfect sense for him to want to hide out and lay low for now, especially if the aliens have no idea about what lies beneath the ruins of Charleston. The biggest issue that the human survivors have faced thus far has been not having the time to build a strong enough force to fight back against the aliens. While on the run, there’s only time to think about living another day and that’s it. But this hidden city has given the survivors precious time to strengthen their forces, create solid plans, gather intel about their enemy, and eventually plot an offensive with the greatest chance of success.

Unfortunately, Matt and Ben Mason eradicated the possibility of all these opportunities. The existence of Charleston remained a secret until Matt went blabbing all about it to that harnessed girl that they picked up on their way to the city. He revealed their plans to travel to Charleston and even asked her to come with them. Once word gets back to the aliens that the 2nd Mass was headed to a demolished city, they may decide to investigate the ruins and look more closely for a settlement of human survivors. Even if that girl was part of the skitter rebellion, that information could easily fall into the wrong hands. Plus, Ben knows about Charleston, and if he were to get captured by the aliens, they could easily torture this information out of him as well. Way to go, Mason boys.

Within the first day of being at Charleston, Pope makes it clear that he doesn’t plan on staying very long. Inconveniently, the Charleston militia forces every member of the 2nd Mass (including the Berserkers) to turn his or her guns over.  This leaves Pope plotting a way to reclaim his weapons (and take some extras while he’s at it) and then escape from Charleston before anybody catches on. While Pope and a few other Berserkers raid the gun supply, Maggie shows up and stops them from stealing any weapons. But then the Charleston military arrives on the scene, and they arrest the whole lot of them, including Maggie.

Meanwhile, Tom isn’t making many new friends either—he continues to push Arthur to form an alliance with the skitter rebels and get back to fighting the aliens. At the community meeting, Tom uses the opportunity to preach to the people of Charleston about the need to fight back against the aliens and do it now rather than later. Tom’s speech is interrupted by the urgent news that a de-harnessed kid has showed up at the border, and he has a message for Tom Mason. The kid (who doesn’t turn out to be Ben) tells them that Red Eye, the leader of the rebel skitters, wants to speak to Tom about forming an alliance. When Arthur hears this offer, he has the kid locked up and forbids any communication with Red Eye.

At this point, Arthur ought to give up the fight. If Red Eye knew about Charleston’s existence and sent a messenger to them, then it’s clear the word is out.  It is only a matter of time until the aliens find out about the settlement, one way or another. Rather than wait for that day to come, why not take this opportunity to possibly defeat the aliens once and for all?  Arthur is a smart man, so he could figure out a plan that would give him control of their rendezvous with Red Eye, in case the entire thing was a setup. If it wasn’t obvious before, it is clear now that Arthur is more focused on being the leader of the new government than doing what’s best for the people.

Now that Arthur has established Tom Mason as a threat to his vision and power, he goes to Pope for dirt on Mason.  He tries to strike a deal with Pope: in exchange for useful information, Arthur will grant Pope his freedom.  But Pope insists that he wants to be the one to bring Tom Mason down, and refuses Arthur’s offer. Pope’s decision is probably based on two things—not trusting Arthur, and wanting the satisfaction of ruining Tom himself.  Clearly he’s a bit hesitant to trust this shady new character that he knows so little about.

Hal disables the guard who is watching Maggie and the Berserkers and lets Maggie out. He tells her that he is joining Tom, Weaver, and a bunch of other 2nd Mass members who are planning on leaving Charleston and meeting up with Red Eye and his rebels. Porter surprisingly helps them out, giving them back their guns and leading them towards the exit. But before they can escape, General Bresler and the Charleston military surround them and take them into custody on Arthur’s orders.  Meanwhile, the rest of the 2nd Mass—including civilians like Matt, Anne and Lourdes—are rounded up and locked up as well.

Eventually, Tom convinces Bresler to stand up to Arthur by instituting a Marshall Law and throwing him in lock-up.  With Arthur behind bars, Bresler tells Tom that now is his best chance to leave town and meet up with the skitter rebels. Finally, the human resistance efforts could have a chance at dealing the aliens a fatal blow.

“The Price of Greatness” was far from TV greatness, but it was certainly an improvement over recent “Falling Skies” episodes. Even though the arrival of the 2nd Mass at Charleston didn’t go as well as expected, it was still an uplifting thing for viewers to see.  Up to this point, the show has constantly been following one small, helpless band of survivors that are constantly running from the aliens. Their enthusiasm for surviving and somehow defeating the aliens has been admirable, but never feasible.  The notion that such a small band of humans could bring down the enormity of the invading aliens was always suspect.

But the introduction of this thriving colony of people, at the “new capital of the United States,” has given hope both to the people of the 2nd Mass and viewers at home.  With the assistance of the skitter rebellion, there may actually be a possibility of human victory here. The existence of Charleston and seeing what the leaders have been able to do there gives the show more material to work with as well.  Kicking alien ass can be plenty entertaining, but if there’s no indication that the situation will change, then the formula gets tired quickly. Charleston is a chance for “Falling Skies” to break its worn-out pattern of survivors constantly on the run and transition into something bigger and better.  Seeing the promises of Charleston materialize in “The Price of Greatness” gave fans new hope for the future of “Falling Skies.”