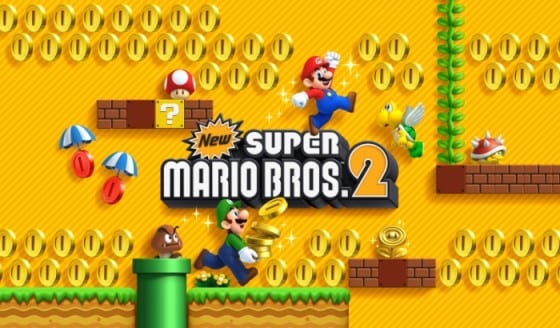 Much like in everything; there are a few things you can always count on in the video game industry. There will be a new Madden every summer, Call of Duty is going to sell a ton of copies even though everyone seems to hate it and Nintendo will keep releasing updates to its hardware — complete with a new Mario game to accompany it. The latest comes in the form of New Super Mario Bros 2, and the brand new(ish) 3DS XL system (reviewed here), and while there’s really no better way to christen your new ‘Merican sized portable, the Italian plumber’s latest adventure feels a bit misguided and lacks some of what made previous games so incredible.

New Super Mario Bros 2 features the same amazing level design and core gameplay that makes the series what it is — but it lacks the imagination previous instalments featured. Still though, you’re bound to have fun with mario’s latest adventure in the Mushroom Kingdom.

Even if you’ve never played a Mario game before, you know what’s going on here. You are of course the Mario Bros, and you’re in search of your captured Princess, who always happens to be in another castle. In an interesting turn though, New Super Mario Bros 2 employs the long forgotten Koopalings as bosses. They’ll pop up at the end of each world in predictable, yet still entertaining fashion.

The key novelty of New Super Mario Bros 2 is the pure abundance of coins throughout the world. Though they may be trivial in previous games, the official currency of the Mushroom Kingdom plays a pivotal role in your journey and they erupt from literally everything in fantastic displays of yellow and sparkles.From the power-ups to extras missions, coins literally play a role in just about everything in New Super Mario Bros 2. One of the most interesting of these power-ups is the ability to literally turn enemies into gold, giving you an even bigger reward for jumping on their head and sending them to Koopaling hell.

The new power-ups are a lot of fun to use at first, but after a short-while, they begin to lose their muster and it’s obvious that they lack some of the imagination that the power-ups introduced in previous games. In fact, that’s a bit of the problem with New Super Mario Bros 2 — it never feels quite like it lives up to its own legacy. Though there’s plenty to love here, everything feels more like a 1.5 than a true sequel, and if you’ve played through the previous game extensively, you’re bound to feel a bit of deja-vu here.

That doesn’t mean though that New Super Mario Bros 2 isn’t one hell of a fun experience. It of course features the astonishingly good level you’ve come to know and love from gaming’s most well-known name and all of the personality to go with it. As has become tradition, the game mixes in fan favorites from previous games so there’s always that sense of nostalgia running through the experience. Even after all these years, there’s nothing like stomping Goombas to the old familiar theme — there’s simply no denying how fun a game like New Super Mario Bros 2 is.

There’s co-op here, but it often feels like it wasn’t given quite as much thought as the single player campaign.The main annoyance comes from the fact that the smaller screen has an issue keeping up with both players at the same time, and can cause a number of frustrating issues like losing powerups and of course, dying. New Super Mario Bros 2 also doesn’t benefit from the 3D effects of the system quite as much as Super Mario 3D Land — in fact, it almost seems inconsequential in most areas.

Blast Factor: It’s hard to fault a game like New Super Mario bros 2 — it instantly takes us back to a time when gaming was as simple as running, jumping and collecting power-ups. It may lack some of the imagination and surprise that previous Mario games have had, but the superb level design and pure fun factor make New Super mario Bros 2 an instant recommendation.