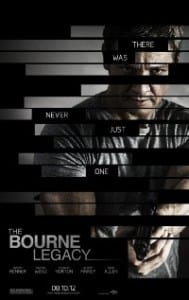 Coming back from “The Bourne Legacy,” which as you will see below I generally liked, I was heartlessly accused by a colleague of enjoying the movie simply because Jeremy Renner spends about a good portion of it with his shirt off.

That’s a ridiculous insinuation. Renner’s bare chest is only like 20 percent of the reason I liked this movie.

Mainly, though, I liked “Legacy” because it is the perfect movie for the latter part of the Summer- blessedly light and fun, with a decent chase scene and all sorts of exotic locales. And it’s maybe the most fun you’ll have watching a movie that actively pushes into the uneasy world of drone warfare. But is this a fourth film in a series, a whole new reboot, an inspiration? Director Tony Gilroy, who wrote all three of the first Bourne films, seems unsure, and that hesitation ends with everything scrambled and incomplete.

The plot starts out reasonably enough. In the wake of Pamela Landy’s (Joan Allen) exposure of Bourne’s bosses, the CIA decides to burn all their projects related to the scandal, starting with the other agents already in the field. The only one to survive the cleanse is Cross, an agent on a punishment training exercise in Alaska for an unnamed breach of conduct.

Unlike the original three movies, which would at times seem simply oppressive with the amount of chase scenes, intrigues and switchbacks, this “Bourne” is lighter than air, skipping along in time and place with alacrity and elegance. It introduces new hero Aaron Cross (Jeremy Renner) as a more laid-back, almost zen-like contrast to Matt Damon’s tortured Jason Bourne. He’s not afraid to shake hands with a man who might have been sent to kill him, or flirt gently with his doctor (Rachel Weisz) who’d pumping him full of performance-enhancing medication. His easygoing vibe makes the brutality with which he later dispatches his enemies all that more impressive and unsettling.

The plot starts to derail about the second act, which becomes a race for Cross to get to the Philippines to infect himself with a virus that will make the genetic alterations made to his body and mind permanent. I don’t know enough science to know if that’s remotely feasible, but my instinct says that infecting yourself with a virus powerful enough to affect your genetic code will most likely render you viciously ill for more than the 12 hours that Renner spends looking a little handsomely feverish. It culminates in a long signature Bourne chase scene through the streets of Manila, stalked by yet another government program agent who’s even more genetically awesome than all the other agents combined, or whatever. It’s generally well-executed, but lackluster and unenthused. I still remember the scene from “The Bourne Ultimatum” where Matt Damon leaps like the world’s most muscular flying squirrel over the rooftops of Morocco and eventually beats someone to death with a hardcover book. I doubt this movie will have that kind of staying power.

Weisz puts in a lovely performance as the doctor who assists Cross in his quest, but her character is a little too “You go, girl!” for my taste. Seriously, try not to roll your eyes when she exclaims in despair about her work for the government, “I was just doing it for the science!” Edward Norton basically phones it in as the government bigwig trying to keep the Bourne scandal contained, but Edward Norton phoning it in is still more interesting than most guys chewing the scenery.

The end of the movie comes too soon and too abruptly- though I normally like it when a movie comes in under two hours, I actually wish there had been another level to “The Bourne Legacy”- another chase scene, another red herring, another layer of intrigue. Sure, you’ve got to save something for the inevitable sequel, but the result seems very unfinished. I don’t mind though, because whatever I think of Jeremy Renner and his chest, he’s got undoubtable star power and good instincts on-screen. He’s a likely heir to Matt Damon’s throne, and I can’t wait to see what he does next.