Following last year’s shaky launch, Nintendo’s release of an improved 3DS model was just bound to happen. Nintendo made the smart choice to mark down their handheld’s initial price to increase profits following lackluster sales figures months after it hit stores. A weak library of games didn’t help attract an audience either. A year after it launched, more mainstream titles are finally taking advantage of what the system has to offer and are making it the preferred handheld console to own (sorry, Vita). The introduction of the 3DS XL, then, should be seen as another push the 3DS needs that will help it stay afloat and ahead of its competitors – and this is one supersized push.

As its name implies, the 3DS XL is bigger than the previous model and feels a lot more comfortable to the touch. When I first played with the original 3DS, I remember noticing how sharp the system felt and how my hands would often get cramped after long play sessions of Ocarina of Time that would require me to keep pressing and holding the L button. Not anymore. The system’s bigger size lets your hands extend more comfortably and its rounded corners prevent it from digging into your palms. Its shoulder buttons are longer and easier to hold onto as well. The stylus has also been repositioned to the right side of the device making it even easier to pop it out with a quick nudge from your finger.

In addition to its more ergonomic design, both the inside and outside of the XL now have a smooth matte finish that gives the system a better grip and makes it less of a fingerprint magnet. The system isn’t glossy anymore and the face buttons and D-pad no longer have that squeaky quality to them. Another big improvement is the design of the Start, Select, and Home buttons. On the 3DS, these buttons were hard to push down and felt out-of-place among the others, but now, they are softer to press and feel like actual buttons. 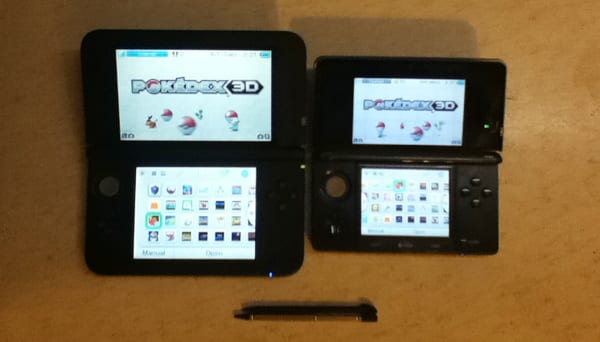 While everything feels better to the touch, the touchscreen actually feels rougher. The first time I swiped the screen with my stylus, it felt like I was rubbing it on a gritty surface. Though there were no actual scratches on the screen, this feeling made me hesitant to even use my XL without a screen protector since the added film made it quite smoother. Another bit of fright came when I opened the system for the first time. The system clicks into place before reaching the desired angle, so if you’re not prepared for it, you might think you just cracked something.

Along with the bigger device comes more screen real estate– 90% more to be exact. It feels great to play games on a bigger screen as you can appreciate their immersive qualities a whole lot more, but as seen with the DSi XL, the increase in size also reveals a game’s imperfections. Jagged corners, blocky textures, and even blurry graphics stand out more and the larger size lets you make out each individual pixel on the screen. Over time, however, I barely noticed this difference and my eyes just got used to the new display. It’s not bad as the DSi XL’s resolution by any means, but it’s a small price to pay for more viewing space. The system’s 3D effects are now more subtle and don’t feel quite as deep. You need to hold the XL further away from you to actually see the graphics pop out, and holding it up close not only reveals individual pixels, but decreases these effects too. Additionally, the 3D slider is sturdier and clicks “off” preventing it from being accidentally turned on in your pocket.

The 3DS only achieved max brightness when it was plugged into its charger; turning on its 3D effects made its screen get darker too. This time, the XL achieves max brightness even when it’s not plugged in and is as bright as the original’s. Turning on the 3D also doesn’t dim the screen as much, so you won’t notice as big a difference as before. I did notice that the volume coming out of the speakers on the XL wasn’t as loud as that on the 3DS. Plugging in some headphones, however, still gives you the same range of sounds you’ve heard before. It’s only a shame the system’s speakers didn’t get bigger too. 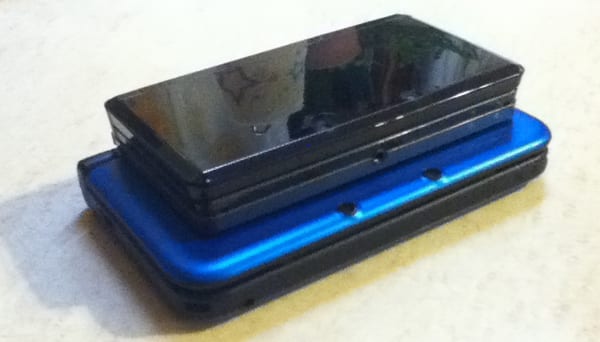 If you already have a 3DS and are on the fence about upgrading to the XL, you’ll have to ask yourself whether or not you mind sacrificing portability (the XL is bulkier after all) for more screen space and added battery life. While my original 3DS only gave me 3 hours and 13 minutes worth of game time with Wi-Fi turned on and sound, 3D, and brightness turned up to max, the XL gave me 3 hours and 30 minutes – a meager 17-minute increase. These results will vary per user, and you won’t always be playing with the 3D on max all the time, so Nintendo’s promise of 3.5 to 6.5 hours of battery life could still hold true.

Bigger screens, longer battery life, and a more comfortable design make this the no-brainer model to own for first-time buyers. It may not fit as easily into your pocket, but current 3DS owners wishing to upgrade will find a way to lug around their XLs after realizing how its improvements truly enhance their overall gaming experience. They may not be groundbreaking changes, and they don’t even include a second Circle Pad built-in, but the 3DS XL is a prime example that the saying “bigger is better” still holds true even in today’s world of shrinking electronics.