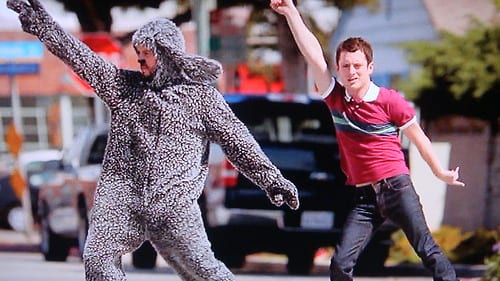 Dancing in the street!

A blast from Ryan’s past leads Wilfred to teach his friend a lesson about avoidance. Dancing ensues.

Kristen (Ryan’s sister) and Ryan are sharing a meal together. Kristen is still pregnant, and thankfully done with that loser doctor. Ryan’s old best friend from his law school days walks over and invites Ryan out to catch up. After he walks away, Kristen remarks that she thinks he’s cute. Ryan doesn’t want anything to do with him. It’s great to see Dorian Brown again, even if it’s a brief guest spot. It was also a pleasant surprise to see Eugene Byrd as James. (For those of you wondering what you’ve seen him in, he’s played a Squintern on Bones, as well as sharing the big screen with Eminem in 8 Mile.) Kristen’s attempts at flirting with James are pretty amusing. It seemed a little odd to me though. Are they trying to play up her hormones? Or was it just to make the situation awkward?

Wilfred asks about James and what happened there. It turns out they both worked for Ryan’s dad and didn’t enjoy it much. They decided to leave and start their own firm, however James took a promotion and stayed with Ryan’s dad instead. Wilfred tells him he should hear James’ side of the story. Wilfred seems to upset Ryan by stating that Dennis is his best friend, even though Ryan considers Wilfred to be his best friend. Oh the best friend wars. I remember that. ‘But I thought I was your best friend!’ It’s an entertaining scene, especially watching Ryan’s reactions to the whole thing.

Jenna takes Wilfred to a doggy dance class. The instructor announces that there is a recital on Sunday, but Jenna can’t take him—she will be in Wisconsin with Drew. Wilfred finds out and asks Ryan to help him. Ryan tells him to ask Dennis, and we find out that Dennis is out of town this weekend, so Ryan it is.

The friends are in Ryan’s basement practicing. Wilfred changes the music and ties up his tail. He tries to dance with Ryan but he doesn’t move well. Boy’s got no rhythm in his hips. Wilfred turns off the music, sits down, and asks Ryan to tell him when he first had sex. He tells Ryan to remember that feeling, then turns the music back on and starts to dance again. What a funny and cringe-worthy scene. Wilfred describing his first time was hilarious, but at the same time you can’t help but cringe a bit thinking about it. Jason Gann does such a brilliant acting job that I could picture the whole thing in my head. Not a good picture.

Wilfred’s trying to teach Ryan how to dance, with plenty of dancing in the streets montages. Ryan finally gets the hang of it. The duo are playing in the backyard when Wilfred pulls something in his groin. Ryan starts to rub it out and Wilfred has a little too much fun. It totally freaks Ryan out, so Ryan decides to head to the Saloon to meet up with James, leaving Wilfred to wonder what happened. “Is it because I jizz-blasted you?”

The dancing in this episode is completely entertaining. I was intrigued when I saw the preview for this episode, but then I wondered how they were going to do it. It just kind of comes up on you while you’re watching, to the point that you get so engrossed in the dancing that you forget what you’re watching.

At the Saloon, James is clearly trying to walk down Memory Lane. Kristen is there and her attempts at getting James to notice her are gawky (she really wants to get laid or something). Ryan is avoiding any serious topics about why they aren’t friends anymore. He sees Wilfred standing outside on the street and goes out to see him. Wilfred makes things really embarassing about the earlier situation. He offers to talk things out, but Ryan avoids it. Once again, the formula is in play here. However, the more I watch, the less distracting it seems to be. Of course, the previous dancing scene might have helped with that.

Ryan goes back home and is looking out for something. He hears a banging noise and goes into the basement to check it out. Wilfred is there to dance, so he can get his treat. Ryan breaks free of his grip and runs upstairs into the bathroom. Wilfred demands his treat and to be let in. This scene was creepy, jarring, and not really funny. It began quickly and ended just as quickly, leading into a commercial break. Other than for plot reasons, what was the point? It seemed like a filler scene. Like someone was editing the episode and decided they needed something before cutting to commercial and just slapped this scene right there.

Ryan is talking to Amanda on the phone. She’s in San Diego, apparently at Comic Con. (Totally jealous.) Wilfred knocks on the door and Ryan ends the call. He asks what Wilfred wants and Wilfred apologizes for what happened the night before. Ryan really doesn’t want to hear it. They decide to put it aside and let things be the way they were. Wilfred pulls him outside and wants a treat.  Ryan finally confronts him and asks him what’s with the “rapey dancing.” Wilfred tells him he wants a churro. Once again, Wilfred makes a point by claiming that it all would have been avoided if Ryan would have just talked to him about it. Wilfred says he jizzes over everything, then basically points out everything in Ryan’s house that he’s ejaculated on.

Cut to James and Ryan. Ryan is listening (finally!) to James’ side of the story. Apparently, Ryan’s dad threatened to have him blacklisted by every judge in the state. That’s a pretty good incentive to stay, I guess. James tells Ryan that Ryan’s dad only talks about Ryan and that he wants him back at the firm. James calls Ryan’s dad Darth Vader. I’m calling it now—Ryan’s dad is going to make an appearance this season (or maybe next season, but FX has to renew the show first). At some point, we will hear from Ryan’s dad. It just has to happen. That is going to be a great episode, too.

Ryan and Wilfred missed the dance recital. Ryan turns on the music (a jazz version of the theme song) and the two of them start to dance. They’re both in tuxes (well, Wilfred is in something tux-like) and they perform a snazzy little number on an imagined stage. Who knew those two had the moves? Wilfred, afterward, gets his treat. He offers some to Ryan, and then proceeds to shove his head onto the churro.

When David Zuckerman tweeted that Avoidance might be the funniest episode yet, I found that hard to believe. It couldn’t completely top Squishy Tits for me, but Elijah Wood and Jason Gann dancing evened the score. There was a bit of “rapey dancing” so that was kind of awkward, but other than that it was a pretty decent episode. As for whether or not it’s the funniest yet, that decision will have to be made after the finale has aired.

The last dancing scene that rounded out the night was fantastic. Elijah Wood looked great in a tux. Jason Gann looked great in a dog suit with a piece of a tux on top. (Bear with me, I don’t know the technical terms with men’s clothing.) There was some very enthusiastic dancing going on. Jason Gann has some groove in those hips!

The guest stars were amazing, even though they didn’t appear in the episode too much. Dorian Brown’s limited lines definitely got some laughs over here. The awkwardness she brought as Kristen was one of those squirm-in-your-seat-because-you’ve-been-there-before moments.

The comedy wasn’t as great as last week’s and that shows when you take away the dancing. However, “jizz-blasted” is going to remain in my vocabulary for the rest of my life. The scene where Ryan ends up locking himself in the bathroom really left a bad aftertaste. It’s hard to forget about that and it ends up taking away from the episode in a big way. It was crude and confusing.

Next week’s episode is called Truth. Any guesses as to what that might be about? Perhaps the season one finale? A girl can hope.