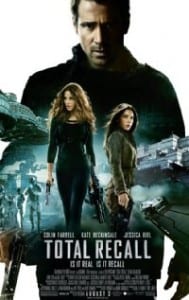 In accordance with my dismal record regarding classic action movies I only saw the original “Total Recall” when I literally had to watch it in order to write this review. It’s one of the few times I actually caught up on a classic movie and understood what all the fuss is about.

For those who haven’t seen it, or don’t remember, the first half of the original film is less like a vision of the future and more of a time capsule, filled with a young Arnold Schwarzenegger running around a 1980s California chic apartment and Sharon Stone’s workout leggings. It’s not until the latter half of the movie that we are introduced to what became in many ways the Rosetta Stone of modern sci-fi: a hellish Mars colony of desperate, mutated have-nots who have to pay to breathe and the detritus of long-dead alien life lying in tombs below the grim Martian landscape.

There is no Mars in this slick, exceptionally well-produced version of “Recall.” Colin Farrell’s hellscape intriguingly resides in a post-Apocalyptic Australia, now called simply “The Colony”. The Colony is run by the only other place of Earth that is still inhabitable- Great Britain and part of Western Europe, now called the AFB. People escape their wretched lives with Rekall, a program that can implant memories and give you the life you wish you had.

Farrell plays Doug Quaid, who has an ok job, and a super-hot wife (Kate Beckinsale) but goes to Rekall looking to implant the memory of a recurring dream where he’s a secret agent. The machinery malfunctions, and then, as they say, the fun begins.

Farrell was a good choice for this role- he’s pretty good at being handsome and baffled all the time- and Beckinsale is actually more likeable than I’ve ever seen her as his wife who may or may not be an arch-villain. Jessica Biel is inoffensive but frankly forgettable as the lieutenant of an insurgent group, and both Bryan Cranston and Bill Nighy drop in, chew a little scenery, give a couple speeches on the fluidity of self and leave within a matter of minutes.

The real star of this production is the production. The design of this “Recall” is some of the best I’ve seen in recent memory. The primary theme of both the original movie and the original story by Philip K. Dick is the fluidity of our sense of self, and director Len Wiseman creates a whole universe dedicated to this theme. The Colony is visualized as a labyrinthine, almost lego-like structure, with layer of upon layer of street and neighborhood to combat this new world’s incredible lack of living space. Elevators move in all directions, a giant tunnel through the Earth’s core allows people to commute halfway across the world, and cars are magnetized upon freeways that stretch seemingly into oblivion. It’s a little obvious, of course- the more truth Quaid discovers the more lost he becomes, what is the self, what are the layers underneath the surface, etc. etc. But that doesn’t make this movie any less of an impressive feat of visual grandeur and engineering.

Where this remake fails is its dismissal of what made the original film so memorable. Wiseman’s “Recall” is slick, flawless and shiny, but it lacks the grotesque, the amazing graphic violence that sticks in your head about the first one. For inquiring minds, yes there is a woman with three breasts, but it’s not the same. There was something irrepressibly filthy about that woman in the 1990’s Martian dive bar, but Wiseman films her as just a glossy reference- something you have to have if you don’t want to make the fans angry. Wiseman also seems happy with a pretty lame script by Kurt Wimmer and Mark Bomback, which bases itself on the fact that these people were able to build a tunnel through the Earth’s core, but still use metal bullets.

I’m not sure if this is worth the money you’ll have to pay the babysitter and parking, not to mention the admission, to see this movie. It is beautiful and it hits all the marks the superfans will need. But if you’re expecting something, let’s say, irrepressibly filthy, go ahead and rent the original.