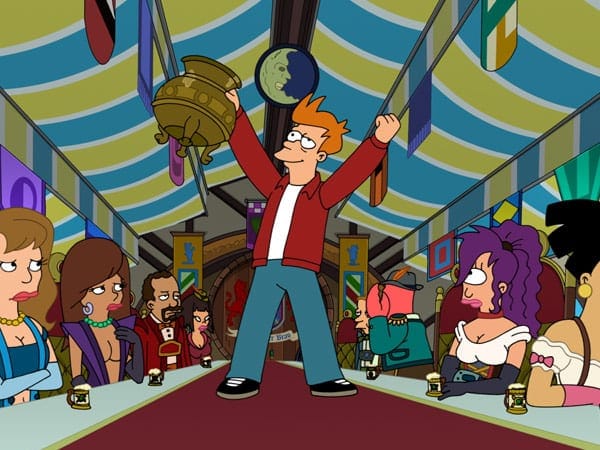 I may still be relatively new to the Futurama universe, but I think this episode was a great example of the show’s absurd humor. The high point featured a battle between Neanderthals on mammoths and people on spaceships, and it seemed totally normal. Where else are you going to get entertainment like that?

“Fun on a Bun” starts with the gang hanging around at Planet Express: Bender is coloring, Amy, Zoidberg, and Hermes are playing cards, and Fry is eating chips and salsa with his toes. “Fry, that’s disgusting!” Leela protests, using her own feet to grab a chip. “You double-dipped!” They’re interrupted by the arrival of Professor Farnsworth, who says he wants to get to know them all in a more informal setting. He admits he doesn’t even know half of their names, even though they’ve worked with him for years. They decide to go to Oktoberfest even though it’s three months away.

This Oktoberfest is not the Oktoberfest we (and Fry) usually picture, however; it’s no longer a rowdy beer-centric gathering but rather a highly sophisticated celebration of German food, drink, and culture.  Leela calls it a celebration of how far humans have evolved. Fry calls it boring, but he can’t find anyone to turn it into a party with him.

Bender, meanwhile, heads into the sausage competition tent where not only does he say the name of the episode, “fun on a bun,” but the phrase is also scrawled on a sign propped up against a hot dog statue. I love self-aware jokes, particularly ones involving signs. Futurama seems to be big on having hilarious signs or book titles that you can either notice or not, but I increasingly find myself searching for them on screen. Bender decides he wants to make prize-winning sausage but is informed that regular old pork won’t do. Unfortunately for Bender (though fortunately for the “Craigslist pig” he’s keeping in his body compartment) he’ll have to find a rarer source of meat.

Back in the main tent, Fry is so desperate to get his hands on more than a sample of beer that he begins drinking from the pots that everyone has been spitting their beer tasting samples into. Leela says that people in his day were backwards and crude. Fry retorts, “At least they were hammered!” Successfully drunk, he hops up on the table to do the chicken dance (complete with his-and-hers chicken hats for him and Leela to wear), but Leela refuses. She breaks up with him for his Neanderthal ways. She wants someone a little classier to date. Fry’s reaction? “We were going out? Woo!”

Fry and Bender wander around Oktoberfest, both disappointed and depressed at their respective rejections. They stumble upon a history kiosk, which explains in holographics that the site of the festival is in prehistoric Neander Valley, where Neanderthals and mammoths roamed freely. In fact, there are several woolly mammoths buried and perfectly preserved in the ice. Bender sees his prizewinning sausage meat opportunity, and he and Fry set out to defrost a mammoth.

Having successfully located a frozen mammoth, Bender sets to work grinding it up in his handy Mammal Muncher to make sausages. Fry gets a little too close to the action, though, and is sucked into the grinder along with the mammoth. Bender, predictably, doesn’t notice at all, and proceeds to serve his “mammothwurst” at the fair. Leela in particular finds it delicious, at least until she notices the orange hair and bits of Fry’s clothing in her sausage.

Wracked with guilt over breaking up with and then eating her boyfriend, Leela heads to Annie’s Forgettery to have her memories of Fry wiped away. Annie explains that the memories won’t actually be gone, but the connection between them and Leela’s conscious brain will be snapped. The treatment is successful, though the rest of the Planet Express gang has to walk on eggshells to avoid accidentally reminding her of Fry. Hermes even goes so far as to change a delivery date to Saturday and not Friday.

Good news! Fry isn’t dead after all (though I hardly expected him to be). As we see in a flashback, he did get sucked into the meat grinder with the mammoth, but the blades only got a bit of his hair and, somehow, all of his clothing. Ah, cartoon physics.  Fry ended up falling back into the hole that Bender dug the mammoth out of, smashing his head on the way down and embedding himself into the ice.

He wakes up frozen in the ice block, but soon two Neanderthals (no, seriously) break him out with their clubs. He can’t remember who he is, so I bet he doesn’t remember being frozen for a thousand years back in 1999, but I bet if he could it would be traumatizing. His forehead is protruding from the blow he took to the head at the hands of the cliff face, so they decide he must be one of them.

Fry’s new Neanderthal friends explain how they came to be there. 30,000 years ago, Homo sapiens first came to Neander Valley. The Neanderthals tried to befriend and interbreed with them, but the Homo sapiens refused and banished them to live where they do now, under a sheet of ice. Fry decides based on his underlying feeling of sadness and his recollection of people declining to breed with him that his own story checks out and he is, in fact, a Neanderthal.

The Planet Express gang has returned to Oktoberfest, where Bender has taken third prize in the sausage competition. Bender calls it “The greatest injustice Germany has ever committed.” This line made me giggle at the time, but it definitely walks an uncomfortable boundary.  Zapp Brannigan, one of the judges for the sausage contest, comes over to talk to Leela, but their conversation is cut short by the arrival of Fry and an army of Neanderthals. They had found a hole in the ice that led straight to the surface, and they want to get their land back.

Fry leads the mammoth cavalry into battle, and the Neanderthals destroy Oktoberfest. Amidst the mayhem, Bender steals the second prize trophy and sash from another sausage chef and claims them as his own. Hermes is under attack from a giant sloth brought to battle by the Neanderthals, but it takes a ridiculously long time for the creature to swing at him. Hermes even busts out a newspaper to pass the time while waiting for his imminent pummeling.

Zapp attempts using technology to combat the Neanderthals, but the sheer force of their animals overpowers Zapp’s fancy weapons and ships. His own ship is even broken by a catapulted saber tooth tiger, which promptly attacks and presumably mauls him. The attack happens off screen, and we’re treated to a delightfully dry summation of events by Kif.

The Neanderthals are also thwarting the efforts of technology by breaking into the giant kegs of beer with their mammoth’s tusks and spraying the electrified tanks. Bender, again taking personal advantage in a crisis, has located the first prize sausage winner and is “carrying him to safety.” Yeah, right. Leela takes the Planet Express ship out for a run at the Neanderthal ringleader, Fry, but his mammal stabs the underbelly of the ship, and Leela goes down.

She rushes out onto the body of the ship just as Fry jumps up there as well. They attack each other in a surprisingly well-choreographed fight scene, Fry decked out in animal skins and Leela still in traditional German garb. Yup, totally normal. Just as she gets the upper hand and is about to kill him with his own spear, they make eye contact and start to remember one another. They kiss passionately, and when the other Neanderthals see this, they make peace with the humans and everyone kisses and makes up.

It’s a happy ending for all involved: Leela’s brain cells reconnect, she and Fry get back together, Bender secures first prize after the original champion “accidentally” fell off a cliff. The Neanderthals and the humans are enjoying Oktoberfest together just as Fry wanted—the beer is flowing, people are dancing and having a good time. There’s even a great little nod to the opening of The Flintstones when a huge rack of ribs (presumably mammoth) is placed on the edge of a table and the whole thing topples over. The episode ends with Leela taking her turn at embarrassing Fry by doing the chicken dance up on the table in front of everyone, and all is right in the Futurama-verse again.

Futurama is one of the few episodic comedies that I watch, and I really enjoy seeing how absurd they can get within a 22 minute time frame and still resolve the plot. Going into this episode I can say I did not expect to end up watching prehistoric and futuristic man fighting each other at Oktoberfest, but I think that’s the beauty of this show. Things are going to get weird, but they’re going to be funny, and so far for me, Futurama has delivered every time.

Favorite Lines from “Fun on a Bun”

Fry: “I didn’t know this ship had a mammoth detector.” Bender: “You’re drunk, Fry. This is the elephant detector. I just set it to big and woolly.”

Zapp: “In recognition of your overwhelming victory, let’s call it a draw.”