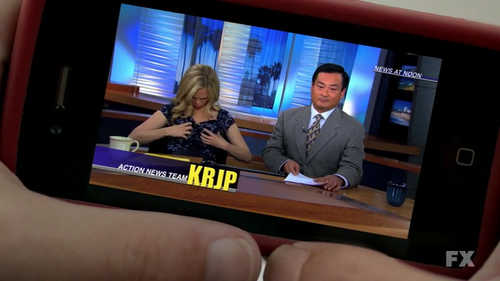 David Zuckerman tweeted that next week’s episode might be the funniest one yet. I think it’s going to be hard to top this week, especially with the famous Squishy Tits remix video.

The beginning of the episode shows a remixed video of Jenna playing with her boobs (squishy tits!) while she was high on the air. The camera pans out from the phone and we see Jenna watching it with Ryan on a beach. Ryan offers to help to get it off the internet. They end up running into Amanda. Well, technically she’s the one running. Ryan (who seems surprised to see her…in a very guilty voice) introduces her to Amanda and they talk for a bit.

As in, not at all. That was incredibly awkward. Amanda continues her run and Jenna gets a phone call from Drew, which leads Ryan to talk to Wilfred. Ryan feels weird that Amanda met Jenna while he had his arm around her. I don’t understand the problem, but I guess in normal relationships it would be one. Let’s go with that.

They speak about the Lesson-of-the-Week: control and how there’s no point in it. Wilfred tells a story about Rex and Lady, which may very well be more about Wilfred and Lady. Ryan suggests a dinner party and Wilfred is excited at the idea, claiming that it would also be a good opportunity to get to know Amanda. I am so glad to see Fiona Gubelmann back as Jenna. I’ve grown to enjoy Jenna, especially with Amanda in the picture. The squishy tits remix video? Greatest. Thing. Ever. You’re welcome.

Ryan and Amanda are on a date. Amanda has seen the video and asks if it’s Jenna. Ryan says she should get to know Jenna better without judging based on the video. He suggests a dinner party to make that happen. Ryan is setting things up for the dinner party and Jenna shows up with Drew. (Still together. Still don’t understand why.) Amanda shows up next with pie. (Still getting married. Judging you, Jenna.) Wilfred arrives with Bear and an empty dessert box. He attempts to say hello to Amanda, which makes things all sorts of awkward. Wilfred, dejectedly, heads to the kitchen. I’d almost feel bad, if I didn’t know he was doing this on purpose. Ryan is clearly trying to get things to work and I do feel bad for him. Awesome couple of scenes, except for Drew. Chris Kline is so brilliant as Drew that he makes it too easy to dislike the character.

Ryan and Wilfred are in the kitchen talking about what happened. Wilfred apologizes—it almost seems legit—and Ryan seems to believe him. All the tension has sent Bear back to the bottle. Bear throws the beer bottle against the refrigerator. Somehow this is going to ruin the night.

Dinner time! This ought to be good. Wilfred comes out with Bear to the table. Amanda’s annoyed and Ryan isn’t amused. Amanda wants a new plate of food (because Wilfred might have touched it) and Jenna switches with her. Very odd. Drew mentions that he had a dog named Lady, but she ran away. Huh. He really is a clueless jackass. Jenna seems offended about Amanda’s attitude about dogs. Amanda pulls out her science knowledge and points out that dogs are not nearly as clean as they seem. Cat fight, cat fight! (With mud, maybe? Jello?) Of course, just as things are really starting to get good, Wilfred knocks into Amanda, which causes her to spill some wine on herself. She steps out to change. Ryan confronts Wilfred about his behavior. Ryan notices that Bear has two eyes. Wilfred tells him that Bear got the button one from Amanda’s coat. Ryan rips the button off of Bear. Wilfred starts to mess with the hole. Ryan wants to know why Wilfred is trying to make a mess of things and Wilfred points out that he can’t force them to get along. When is Ryan going to learn that it’s just best to listen to Wilfred from the beginning. Wilfred’s lessons are never easy to learn.

Ryan goes back outside and apologizes to Jenna. He tells her and Drew that Amanda was attacked by a dog when she was a kid. Jenna asks where she was bit and Ryan says it’s on her left butt cheek. Oh this is going to come back and bite him in the ass. (Pun intended?) Wilfred calls Ryan out for lying. Oh no.

Jenna apologizes and Amanda says it’s fine. Jenna tells her about the video, which Amanda claims to be unaware of (Drew actually makes a funny here and says “I’ll send you the link.”) Amanda invites Jenna to a spa day for the two of them. Ryan goes to get wine and talks to Wilfred. The dog says that people have to have their clothes off at the spa. That’s an issue and Wilfred almost (almost!) uses the same crappy joke I did. Manipulative-Ryan isn’t as fun to watch as Regular-Ryan. He’s just not the type to be manipulative. That’s (mostly) Wilfred’s gig. Drew steals this scene. “I’ll send you the link.” Ha.

Ryan and Amanda are talking about her and Jenna getting along. Ryan tells Amanda that the heat isn’t good for Jenna because she has a heart condition. Drew asks for pie and when Ryan goes to get it, Wilfred pops up, his face dirty from eating it. Ryan tries to take Bear away from Wilfred, which is a really bad idea. Wilfred falls and pulls off the pants that Amanda is wearing. Jenna asks where her scar is and Amanda asks what scar. Amanda is pissed about Ryan lying. Jenna tries to stick up for him but Amanda tells her “Stay out of this ‘squishy tits.'” Wilfred almost makes another lame joke and even notices that he’s off. (Just a little.) Amanda tells the story about why she doesn’t like dogs: her grandfather had two dogs when she was growing up. One day Amanda found her grandfather lying on the kitchen floor. He had a heart attack and the dogs had gotten so hungry that they had eaten parts of the body. Gross, but Drew’s reaction makes it oddly funny as well.

Ryan knocks on the door to check on her and finds Wilfred with her on the bed. Wilfred comforted Amanda and made her feel better about dogs again. Ryan apologizes for lying and they manage to patch things up. Ryan admits to wanting her and Jenna to get along, for the sake of their relationship. Amanda tells him that he doesn’t have to worry about them. Wilfred lays his head in Amanda’s lap and smells it, just like he’s always wanted. What is this new bond between Amanda and Wilfred going to mean for future episodes? It’s going to be very interesting to see how that will play out in the next few weeks.

Ryan and Wilfred are watching TV. We find out that Amanda and Jenna are going out to dinner without Ryan having to interfere! Wilfred says he’s proud of Ryan.

Wilfred is reporting that Bear is sober once again and even has a sponsor. Ryan asks if Bear’s sponsor is an origami swan and Wilfred says that they know the swan can’t talk to Bear, but that it helps Bear.

The squishy tits video has vaulted this episode into greatness. Jenna will forever be known as Squishy Tits. Drew was even partially tolerable. The formula was still a bit too obvious (did Jenna really need to know where Amanda had been bitten?) but it was forgivable simply because Jenna was back. I know I’m not one to spread the Jenna-love around, but it seems that Ryan isn’t pining over her the way he used to, which now makes her enjoyable to watch. Even if she is with a huge loser.

It was nice to see more of Allison Mack in this episode and her last scene with Wilfred was as cute as can be. Looking forward, I hope that they consider an episode (or at least a few scenes) where Amanda is looking after Wilfred. I can only imagine the hijinks that would occur on Wilfred’s part.

Wilfred didn’t have a strong comedic presence this episode, which was a little disappointing. I always look forward to what he’s going to bring week-to-week. However, there was plenty of comedy coming from the other four and I think that made up for it. This episode was definitely about reactions and faces, which was great to see.

Make sure to check out next week’s episode, Avoidance. Will it be the funniest episode yet? We’ll see.