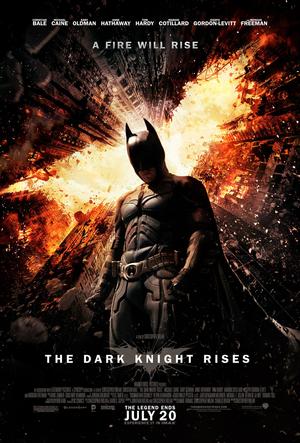 This is one of those times where your film critic severely dislikes Blast Magazine’s star grading system.

How to grade something like “The Dark Knight Rises”—gorgeous, unwieldy behemoth that it is? How do you quantify a story that is both the end of a beloved franchise, the Tentpole Movie to end all Tentpole Movies, and the final act of an auteur trying to share his Big Ideas?

This critic gave it 2.5 stars out of 4, but seriously, what does that even mean?

It’s difficult to boil down anything regarding this movie, which is possibly the perfect representation of the phrase “flawed masterpiece.” It’s an ungainly thing in which every component is perfect. I see it very much like some imagined steampunk contraption. Each rivet and gauge immaculately crafted and lovingly fussed over, which is then all strapped together with duct tape and a prayer, threatening to topple over at any moment.

We begin during peacetime in Gotham City, eight years to the day when Harvey Dent/Two-Face died and Batman took the fall for his crimes at the end of “The Dark Knight.” Dent’s false legacy has created a law-abiding populace in Gotham free from the terror of organized crime. Batman has retired, Bruce Wayne (Christian Bale) receding to his mansion to become a billionaire recluse with bad knees and a hang-up about dating. Into this vacuum steps Bane (Tom Hardy), a mercenary with a Vader-like gas mask, and a pseudo-populist philosophy. He wants to give Gotham “back to the people,” which obviously means gathering an army, getting his hands on a nuclear bomb and killing most of the people he wants to give Gotham back to.

That’s just the primary plot; there are several subplots that weave in and out, including Marion Cotillard as a debutante who wants to fund clean energy, Joseph Gordon-Levitt as an ace rookie cop, and Anne Hathaway as a jewelry thief named Selina Kyle who wears some very insensible shoes with her spandex catsuit. I think you may have heard about her.

And this being a Christopher Nolan film, all of this is much, much too long. The runtime is 2 hours, 44 minutes, and at least half an hour of that is Michael Caine’s Alfred giving stern warning speeches to the excitable Wayne about how it’s a bad idea to start being Batman again after an eight-year lull. At the end you are not just in need of a restroom, you are physically and emotionally exhausted.

But there is so much good here. Nolan is a virtuoso in choreographing action scenes, especially car chases (I actually clapped my hands in excitement when the first one began). And the man can wring a great performance out of a rock. Levitt, Hathaway and Hardy all give stellar scenes, while veterans Caine, Morgan Freeman (as Lucius Fox) and Gary Oldman (as Commissioner Gordon) reprise their roles with aplomb. Even young Juno Temple with a small role as Selina Kyle’s pickpocket friend is excellent onscreen. Christian Bale, for all his weirdo Batman/Deep Throat voice, is agonizingly great to watch as an older, regretful Bruce Wayne—a man who at the beginning of the film is a warrior without a war to fight, making him a little too eager to get back in the game when the opportunity presents itself.

I’m still on the fence about the characterization of Bane as a psychopath with a socialist bent, which results in a funhouse mirror reflection of the Occupy Movement. The villains in Nolan’s Batman have always exemplified the dark side of revolution—the implicit violence that occurs when one upsets the status quo, or at least our anxieties surrounding it. It’s more than a little on-the-nose that Bane makes his grand entrance in an attack on stock traders in Gotham’s version of the New York Stock Exchange, as is Catwoman’s semi-Robin Hood act of stealing from the rich to give to herself. But in the end I think it works, mainly because Hardy and Hathaway are smart actors who know how to make their characters people and not metaphors. Some of Nolan’s other Big Ideas certainly do not work at all. Did we really need that whole montage of hoardes of poor people smashing up people’s homes? Did we seriously require a literal bus full of orphaned boys? Our fearless director (and he is fearless, without a doubt) has what I like to call Peter Jackson syndrome. After his great success, no one can ever question him or tell him no. That is something that is sorely, desperately needed by someone in his position.

The plot shakes most severely around the beginning of the third act, spasming between scenes of Bane’s ravaging of Gotham City and Bruce Wayne finding his mojo down in a (literal) pit of despair. For 45 minutes we’re racing around, following a thousand different trains of thought, from Cillian Murphy condemning rich people in a kangaroo court, to an ancient prison, to the League of Shadows, back to a rebellion led by Gordon, to… I don’t know, yet another office building where there’s a secret wall/platform/staircase to some awesome new weapon. Everything is beautifully stark and noirish and crystal-clear in IMAX. Nolan, God bless him, does not film in 3D. It sews itself back together at the very end, providing a most satisfying ending. But frankly before that it gets a little insane.

So, at the risk of incurring death threats, I’m going to say it’s 2.5 stars out of 4. It’s not the best movie ever made. It’s not the death of cinema, nor is it perfection. But it is everything that Christopher Nolan’s got in 164 minutes. Whatever else it is, it’s his sweat and blood, his ego and soul, his failure and triumph. It is the end. Until they reboot the franchise once again. Probably 5-7 years from now.