Johnny Kung Fu joins a list of new games that are paying homage to titles of yesteryear. At first glance, Johnny Kung Fu looks like it is going to be another beat ‘em up game about a boy who has to fight his way through hordes of bad guys to save his kidnapped girlfriend. However, you’ll be pleasantly surprised that the game is actually a mash-up of various Game & Watch titles too. Unfortunately, with nostalgia also comes an unforgiving level of difficulty.

As soon as you start the game, a one-hour timer will begin to tick down as you make your way up over-30 floors of the Unethical Finance Operations building, aptly named considering the developer is UFO Interactive. Some floors require you to fight an onslaught of bad guys that culminate in a boss battle. Other levels are throwbacks to classic Game & Watch games like Judge and Ball and recreate the classic feel of playing on old LCD handhelds. These levels get progressively harder the higher up you go and each time you lose three lives, five minutes will be taken from your clock. 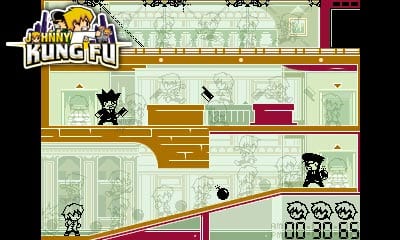 The game does a good job at mixing up the more action-oriented fighting stages with the slower Game & Watch ones that require you to time your moves carefully. While the game’s combat may involve simple button mashing, the fighting is fun and seems to evolve over time. Enemies get smarter and have different special attacks, and Johnny himself unlocks new moves with each boss he defeats. The retro levels may take you down memory lane, but if you remember, games back in the day weren’t that easy to beat.

Make one mistake climbing your way up the game’s Donkey Kong-like level, and you’ll need to start over from the beginning, wasting more time as you wait for bombs to beep towards you to jump over them. These stages are a nice break from the action, but they require quick reflexes and punish you for rushing through without thinking. Die too often and you’ll run out of time too. You can’t continue either, so dying means having to start back from the first floor. This, coupled with the game’s challenging stages, can get quite frustrating. Don’t get me wrong – Johnny Kung Fu is a fun title, but it will make you want to toss your 3DS out the window a few times.

While the game only contains a handful of mini-games and floors that repeat over time, their gradually increasing difficulty makes Johnny Kung Fu a challenging experience. Each level’s unlockable score-attack mode also gives the game some replay value after you beat it. Despite its flaws, Johnny Kung Fu can be enjoyed when you want quick bursts of fun or if you’re looking for a game that won’t hold your hand.