Scottish-Irish singer-songwriter Sandi Thom became a UK sensation almost overnight back in 2006, thanks to the Internet and her 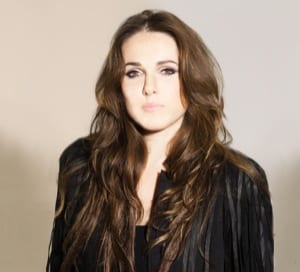 smash single, “I Wish I Was A Punk Rocker (With Flowers In My Hair).” The song hit #1 on British and Australian charts and received a Brit Award nomination, but that’s not what Thom wants to be remembered for.

Her upcoming fourth record, “Flesh and Blood”, is her first release that she had total control over, and she can’t wait for fans to finally hear it when it drops on September 25. “It’s the first album I’ve done that is really about me,” she says.

Now she’s set up shop in the U.S. with the support of her own record label, a team of legendary musicians, and a loyal fan base. Get ready America, because there’s a new female powerhouse in town, and she’s poised to break into the music scene this summer.

Thom owes a great deal of her success to technology. When her solo career was just beginning in the pre-Myspace era, one of her musician friends played a show and streamed it live over the Internet, much to Thom’s amazement. “Now it’s no big deal, but then, it was mind-boggling,” she says.

A self-described “typical struggling singer-songwriter playing to five people,” at the time, she immediately came up with a plan to use this streaming technology to promote her own music. At the time, she recorded a series of shows at her own house and streamed live over the Internet, called “21 Nights from Tooting”.

“That was really the beginning of the journey for me in how technology aided my career,” she says, “but it really went off the scale with what a success it was.” The British media picked up on the webcasts and as the shows went on, the audiences increased.

“They really … used me as the poster child for the digital revolution. It did an immense amount for me, getting me from A to B and over that massive hurdle of being unknown to known,” she says.

While the album “Smile…It Confuses People” went triple-platinum in the UK, her next single did not do as well as the first, and the third did not even chart. Thom did not let that slow her down, however: she went on to release “The Pink & The Lily” in 2008. She was not satisfied with the end result, though, saying the studio rushed her and put too much pressure on her.

With that, she became an independent artist. She released her next album, “Merchants and Thieves” in 2010 to much less fanfare, although she was nominated for several Scottish Music Awards.

“Because I’ve been independent for a few years now, the level of exposure I’ve had has been a lot less, so a lot of people don’t even know that I’ve done anything after ‘Punk Rocker,’” she says. “So it’s so cool now when I can actually speak to people on Twitter and they’re like ‘Oh my God, where have you been all these years?’ because I’m not on their radar. And it’s great when you can say ‘Well, I recorded three albums and moved to a different country,” she says with a laugh.

While Thom still loves “Punk Rocker,” she seems more interested in promoting her other material. “It’s like, you have so much else going on but people only know that one song,” she says. “Really for me, it’s just about inviting people to understand what’s happened in the meantime and learn about the other records that have come out. There’s just so much more to it than that one song.”

The Internet may have kicked off Thom’s career, but nowadays she feels a bit behind with all the different forms of technology. “Then, I felt like I was ahead of the trend, but now I can hardly keep up with it,” she says. “It’s not about how many records you sell anymore, but how many YouTube and Twitter followers you have.”

Despite this, she does manage to keep fans engaged on the websites she chooses to use, and she appreciates that they allow people to see who she really is. A few months ago, the singer and a few friends spontaneously recorded themselves lip-syncing to a Justin Bieber song in an Apple store and uploaded it to YouTube, much to fans’ delight. She also regularly records herself performing cover songs.

“[Social media] helps me to get across a personality. You want to know the person too,” she says. “There are no Marilyn Monroes and James Deans left. You don’t get David Bowie anymore. There’s not that wall between you and the audience anymore.”

Thom and her team have been using online networks to promote the new album. Billed as Thom’s “coming of age” album, “Flesh and Blood” was recorded in Nashville and produced by Rich Robinson of the Black Crowes. The core studio band included Robinson and a few of his band mates, several Nashville stars, and one of Thom’s idols, singer-songwriter Buffy Sainte Marie.

“I think I had more fun making that record than I have any other, because I really got the opportunity to do what I wanted to do,” she says. “With the other albums, I wrote the songs, but I think the way that they turned out … someone else had a hand in that, and it wasn’t all my choice. With this record, I really worked personally with Rich and he allowed me to take my ideas and run with them.”

Making her latest album also forced Thom to try new things musically. “As a singer, I think it stretched me more than any of my other albums have, which is great, because I wanted to be able to showcase my voice and what I can do with it.”

Thom’s dissatisfaction with her experience with record labels led her to start her own, Guardian Angels. It is a one-stop shop for artists, providing everything from production and distribution to publishing, managing, merchandising, and booking live shows for the acts. “It’s a job and a half,” Thom says with a laugh.

Splitting her time between her own career and running the label may be time-consuming, but she believes in her work. “I’m really happy to be in a position where I can get a lot of power and muscle behind these releases,” she says. This year, Guardian Angels will release her own album as well as a hip-hop act.

As if she wasn’t busy enough, Thom will be taking another crack at her second album: she plans to rerecord the songs on her own terms. “I want to go back and revisit it and rework it and put it back out and really give it the appreciation that it really deserves,” she says. “Some of the songs on the second record were some of the best I’ve ever written. I would love to go back and give them a new lease on life.” She hopes to put the new version out on Guardian Angels next year.

One of the most inspirational events Thom experienced had nothing to do with music, however. She spent three “mind-blowing, life-changing and extremely tragic” weeks in Africa with Oxfam. The main trade in Malawi is farming, so when things like climate change impact the weather, it can cause a great deal of suffering.

“It was actually really horrible to watch people suffer to that extent and know that what you were doing in the Western culture affects these people, and whether they live or die,” she says. “It really opened my eyes to the meaning of humanity, that people can be that gracious through all this tragedy and all this hardship and heartache and suffering. It was like, ‘Why would I ever even consider moaning about anything ever again?’” The experience inspired one of Thom’s new songs, “When The Sun Comes Crashing Down.”

As August approaches and the launch of “Flesh and Blood” looms, Thom is excited about the prospect of breaking into the American music scene. While this is her first experience with the business side of things, she’s optimistic about the way her songs have been received so far.

Check out “Sun Comes Crashing Down” below: